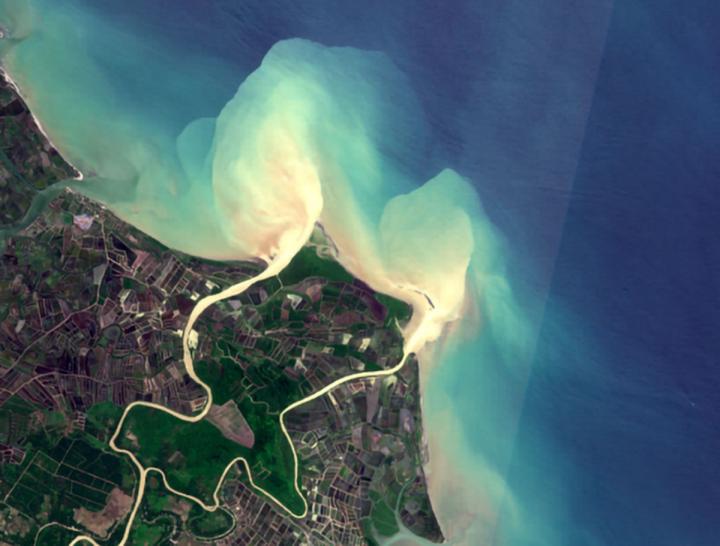 Satellite view of a river avulsion, whereby the river abruptly and catastrophically changed its course to the ocean. This delta is found in East Aceh, Sumatra.

Newswise — Sea-level rise due to climate change is poised to shift the way that rivers naturally chart their path to the shoreline. The nature of that change will depend on both the rate of sea-level rise and the sediment load carried by the river, according to new models by Caltech researchers and their colleagues.

Periodically, a river will change its course to the sea, forming a new path through a process called river avulsion. River avulsions are a natural part of a river's life and are responsible for building new land and nourishing wetland ecosystems with water, nutrients, and sediment. However, river avulsions are also catastrophic natural hazards. They were responsible for some of the deadliest floods in human history, including the 1887 Yellow River floods and the 1931 China floods, which together claimed an estimated six million lives. On some rivers, like the Mississippi, engineers have built bypass channels and levees to counter the dangers of river avulsion.

"A river avulsion is a catastrophic flood that is also crucial for sustaining coastal land," says Austin Chadwick, lead author of a paper about the new model that was published by Proceedings of the National Academy of Sciences on July 13. "But the question is: how will sea-level rise affect these catastrophic floods?" Chadwick worked on this research as a doctoral student at Caltech with Professor of Geology Michael Lamb and Vamsi Ganti of UC Santa Barbara.

Sea level has been rising overall since the start of the 20th century, and at an accelerating pace. In 2014, the Intergovernmental Panel on Climate Change (IPCC) projected that sea level could creep up as much as three feet by the end of this century. Earth scientists have had an ongoing debate about how this could affect river avulsions on deltas, the fertile landscapes created where a river meets an ocean or lake--a critical question, given that deltaic landscapes host roughly 10 percent of the human population.

"Avulsions are the earthquakes of rivers," Lamb says. "They are sudden and sometimes catastrophic natural events that occur with statistical regularity, shifting the direction of major rivers. We are trying to understand where and when the next avulsions will occur." Lamb, Chadwick, and Ganti combined theory, numerical modeling, and field observations to explain how often river avulsions will occur, and how their frequency would respond to a changing climate.

They found that the occurrence of future avulsions depends mainly on two factors: the rate of sea-level rise, and the amount of silt and sand carried by a river.

On most deltas, including the Mississippi River delta, sea-level rise is expected to cause more frequent catastrophic river avulsions. This is because, as sea level rises, rivers respond by depositing more of their sediment into the channel, which raises the riverbed relative to the neighboring land, making the river unstable. Eventually, a levee breach will force the river to find a shorter and steeper path to the sea. More frequent avulsions could flood coastal communities like New Orleans, Louisiana, that are already vulnerable to inundation by sea-level rise.

Sea-level rise could affect not only when, but also where, future river avulsions occur. "If sea level rises faster than rivers can deposit sediment, then the zone of deposition and avulsion will shift upstream, introducing new avulsion hazards to upstream communities," Chadwick says. In such a scenario, existing river-management infrastructure (dams and levees) could be rendered obsolete, and costly avulsion-mitigation efforts would need to shift upstream.

Chadwick, Lamb, and Ganti hope that this work could help guide river management on densely populated deltas, offering them a framework for calculating what to expect over the coming decades.