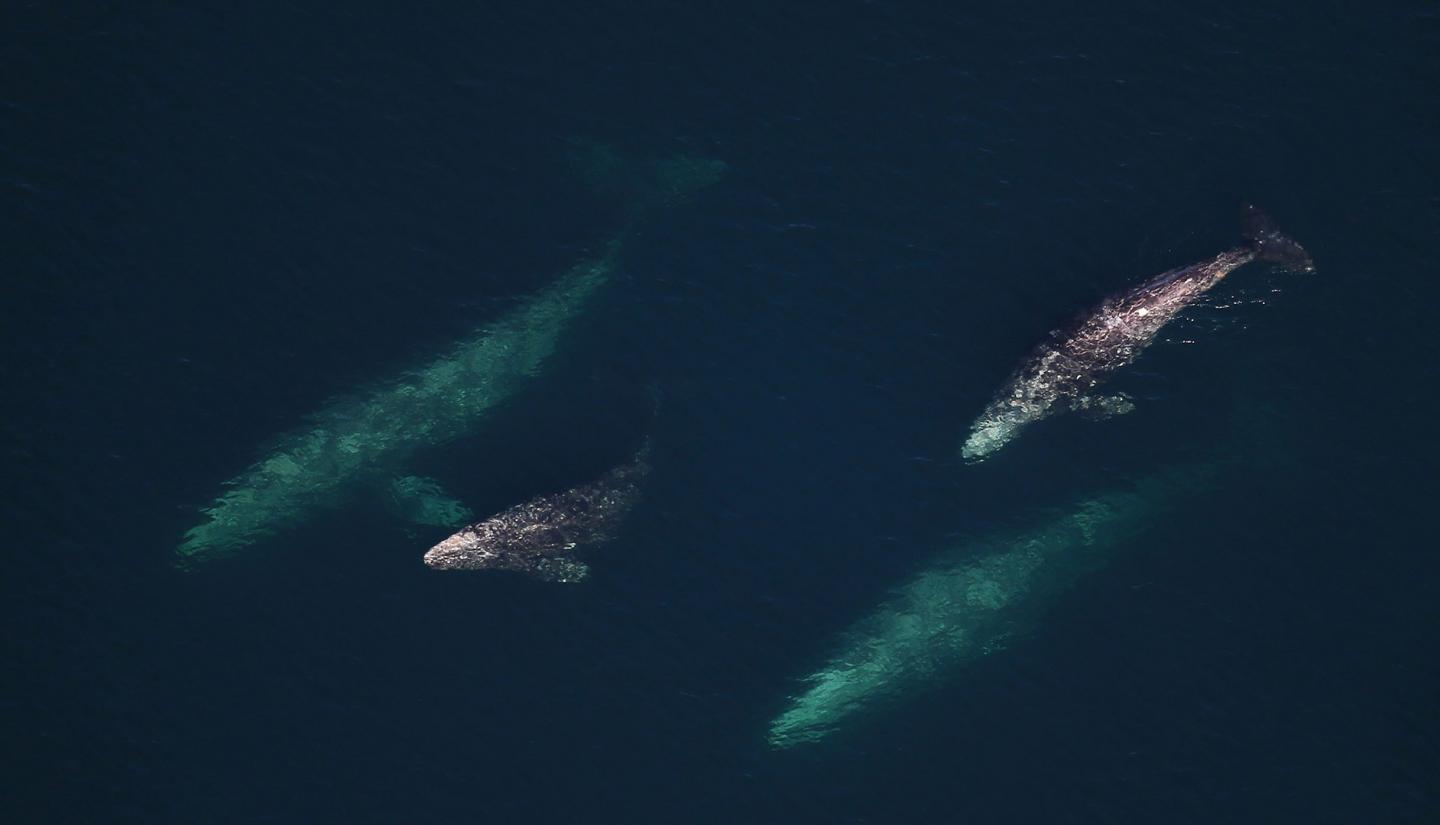 California gray whales like these mothers and calves are 4.3 times more likely to strand themselves during a burst of cosmic radio static from a solar flare, further evidence that they navigate by Earth's magnetic field.

Newswise — DURHAM, N.C. -- When our sun belches out a hot stream of charged particles in Earth's general direction, it doesn't just mess up communications satellites. It might also be scrambling the navigational sense of California gray whales (Eschrichtius robustus), causing them to strand on land, according to a Duke University graduate student.

Many animals can sense the Earth's magnetic field and use it like a GPS to navigate during their long migrations. However, solar storms could be disrupting that signal, said Duke graduate student Jesse Granger, who studies biophysics in the lab of biology professor Sönke Johnsen.

Earlier research has found a correlation between solar activity like sunspots and flares and stranded sperm whales, but Granger's analysis tried to get to the bottom of what the relationship might be.

Gray whales were an ideal species to test this idea because they migrate 10,000 miles a year from Baja California to Alaska and back and they stay relatively close to the shore, where small navigational errors could lead to disaster, Granger said.

She compiled a NOAA database of gray whale stranding incidents over a period of 31 years and sifted out all the cases in which the whales were obviously sick, malnourished, injured or entangled, leaving only 186 strandings of otherwise healthy animals.

Comparing the healthy strandings data to a record of solar activity and statistically sifting out several other possible factors like seasons, weather, ocean temperatures and food abundance, Granger concluded that gray whales were 4.3 times more likely to strand when a lot of radio frequency noise from a solar outburst was hitting the Earth.

She suspects the issue isn't that a solar storm warps the Earth's magnetic field, though it can. It's that the radio frequency noise created by the solar outburst does something to overwhelm the whales' senses, preventing them from navigating altogether -- as if turning their GPS off in the middle of the trip.

The likelihood that whales might be somehow tapping into the planet's geomagnetic fields is pretty strong because landmarks are few in the open ocean, but unfortunately, researchers don't yet know precisely how they navigate, said Granger, whose work appears Feb. 24 in Current Biology.

While her study provides more evidence for a magnetic sense, Granger said the whales may still be using other cues to make their migration. "A correlation with solar radio noise is really interesting, because we know that radio noise can disrupt an animal's ability to use magnetic information," she said.

"We're not trying to say this is the only cause of strandings," Granger said. "It's just one possible cause."