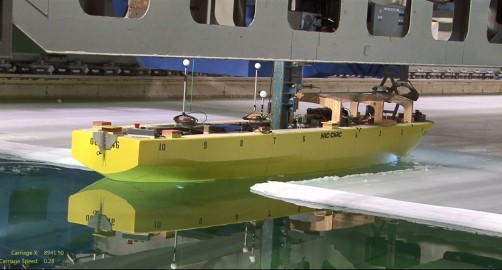 Newswise — The last time the U.S. government tested and ordered new polar icebreaker cutters for the U.S. Coast Guard (USCG) was in 1976. However, in 2015, the decision was made to ramp up the fleet with three brand new, state-of-the-market heavy polar icebreakers. Since it had been so long since the last order, it was like starting from scratch.

As the lead agency for assuring surface access to U.S. polar regions, the USCG deploys specialized cutters called heavy polar icebreakers for these hazardous assignments.  Russia, with the largest artic landmass on the planet, has a fleet of 40 icebreakers. By comparison, the U.S. currently has only one heavy polar icebreaker, the Polar Star, still in service. With global ice caps melting, new northern passages are opening that require vigilant attention.

Since the USCG is a Department of Homeland Security (DHS) component, it made sense for DHS’s Science and Technology Directorate (S&T) to assist the Coast Guard in developing the plan for test and evaluation of the new cutters. S&T’s Office of Standards understood the need to gather in-depth data to determine how to construct the next-generation icebreaker. The USCG in conjunction with S&T would need to incorporate all the technological advances made in the last 30 plus years with that data to create the modernized physical requirements for construction. To do that, they needed to see, first hand, how changes to the current construct reacted to ice.

Allies and Partners to the North

S&T researched options and discovered our allies to the north had exactly what was needed. The National Research Council’s (NRC) ice tank facility in St. John’s, Newfoundland, Canada, is home to the second largest ice tank testing lab in the world.

The NRC ice tank is an indoor refrigerated test lab that realistically simulates a wide range of marine arctic ice environments. It is used to test and evaluate capabilities of ice-going ships and structures in controlled, model-scale conditions.

S&T immediately realized the value in working with Canada’s NRC. “This world-class test facility will enable us to see how an icebreaker will behave in the harsh, polar regions,” said Greg Simmons, S&T Deputy Director for National Preparedness Programs in the Office of Test and Evaluation.

“This is a wonderful example of international and cross-component collaboration,” said Simmons. The USCG model testing at NRC began in May of 2017.

Icebreakers must be capable of, among other duties, potentially rescuing cruise ships that get locked in the ice, clearing the way for natural resource exploration, keeping commerce lanes passable or opening new ones, as well as many other missions. They also have to complete the annual 10,000-mile open sea voyage from Seattle to Australia and then down to Antarctica. Once there, the icebreaker must smash through the frozen bay to lead a cargo ship to McMurdo Station with a year’s worth of life-sustaining supplies.

“Clearly, the cutter must be able to perform multiple tasks. It must be a fully mission capable vessel, and not just a hammer to break ice,” says Brian Olexy, Communication Manager for Surface Programs at USCG.

The goal of the testing of these models within the ice tank is to evaluate how multiple model ships with different hull designs and propulsion configurations perform in simulated arctic conditions. The results of this model testing will further inform heavy polar icebreaker design and performance requirements.

The ice tank itself is roughly the size of the Statue of Liberty – 90 meters long, 12 meters wide and three meters deep. It is housed in a refrigerated building where the air temperature can be brought down to about -13 degrees Fahrenheit.

Replicating the different types and thicknesses of ice is an exact science. The temperature is set, and then precisely measured amounts of water are added in a specified manner for a pre-determined amount of time.

Once the exact ice type has been created for a specific test, precision-built mini model icebreaker ships are put into the tank. Their power and speed, as well as the thickness of the ice they must break through, are all based upon a scale model ratio of 1:30.

To be considered a successful run, the models must be able to cut through the scale equivalent of six to eight feet of arctic ice and smash peaks that rise (proportionately) as high as 21 feet.

Each individual model makes 20-25 runs in the ice tank. Different power outputs are tested on the propulsion systems, with each run taking between three to five minutes to complete. Data (including HD video) is taken of each test. It takes three to four days for the ice to grow back after each run. During that time, the results of the previous test are analyzed and compared against the other model ships, their hull designs, propulsion systems and power settings.

Using scale models is a much safer and less expensive testing procedure than building full scale ships, taking them to sea and putting Coast Guard men and women at risk, Simmons explained.

The USCG believes being able to see the impact on the model ship’s hull and propulsion system, in different ice conditions, as they toggle up and down the power, is crucial to making targeted decisions.

"This type of testing will pay excellent dividends for the program. The Coast Guard will gain great insight into different designs and configurations, which will inform our requirements for acquisition," said Olexy.

How R&D will help

The USCG is not only looking to find the most efficient ship design, but also to leverage the most efficient acquisition process.  The proof of this is USCG’s commitment to the Office of Test and Evaluation’s “Shift Left” initiative. This means the USCG is paying careful attention to the initial test and evaluation phase to determine precisely what their final requirements are for the next polar icebreaker.

By benchmarking their exact needs before the request for proposal goes out, it makes the acquisition process less risky and avoids extra costs and delays. It also increases the likelihood that the bidders will submit suitable responses.