Study Reveals Environment, Behavior Contribute to Some 80 Percent of Cancers 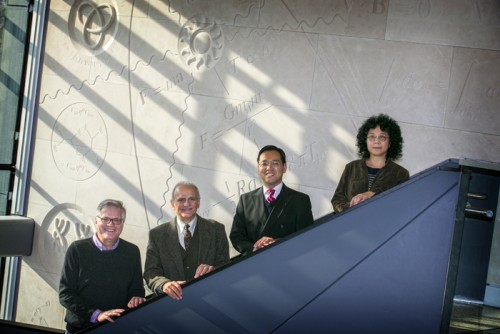 Assembled at Stony Brook University’s Simons Center for Geometry and Physics are the Stony Brook research team that provided quantitative evidence proving that extrinsic risk factors, such as environmental exposures, weigh heavily on the development of most cancers. Pictured, from left: Scott Powers, Yusuf Hannun, Song Wu and Wei Zhu.

Newswise — Stony Brook, NY, Embargoed Until 1 PM, EST; December 16, 2015 – A team of researchers from Stony Brook University, led by Yusuf Hannun, MD, the Joel Strum Kenny Professor in Cancer Research and Director of the Stony Brook University Cancer Center, have found quantitative evidence proving that extrinsic risk factors, such as environmental exposures and behaviors weigh heavily on the development of a vast majority (approximately 70 to 90 percent) of cancers. The finding, reported in the December 16 online issue of Nature, in a paper titled “Substantial contribution of extrinsic risk factors to cancer development,” may be important for strategizing cancer prevention, research and public health.

Inspired by a January 2015 research paper in Science, which concluded that the majority of the variation in cancer risk among tissues is due to “bad luck,” the Stony Brook team used the same data to assess what leads to the risk of developing cancer. The interdisciplinary team of researchers from the Departments of Applied Mathematics and Statistics, Medicine, Pathology and Biochemistry, concluded the opposite – that most cancers are the result of external risk factors.

“Cancer is caused by mutations in the DNA of cells, which leads to uncontrolled cell growth instead of orderly growth. But the development of cancer is a complex issue, and we as a scientific community need to have solid analytical models to investigate what intrinsic and extrinsic factors cause certain forms of cancer,” said Dr. Hannun, senior author of the paper.

“Many scientists argued against the ‘bad luck’ or ‘random mutation’ theory of cancer but provided no alternative analysis to quantify the contribution of external risk factors,” explained Song Wu, PhD, lead author of the paper, and Assistant Professor in the Department of Applied Mathematics and Statistics, Stony Brook University. “Our paper provides an alternative analysis by applying four distinct analytic approaches.”

They developed four distinct approaches to assess cancer risk. With these four approaches, they discovered collectively and individually that most cancers are attributed largely to external risk factors, with only 10-to-30 percent attributed to random mutations, or intrinsic factors.

First, the researchers examined extrinsic risks by tissue cell turnover. In a data-driven approach, they re-examined the quantitative relationship between observed lifetime risk of cancer (ie, for lung, pancreatic, colorectal and other tissues) and division of the normal tissue stem cells in those groups reported in the Science paper. If intrinsic risk factors played a major role, the tissue with the similar stem cell divisions would show similar observed lifetime cancer risk. They found this pattern to be a rare one, and thus determined intrinsic factors played a vital role in only about 10 percent of cancers. These results are supported by strong epidemiologic evidence; for example studies showing that immigrants moving from countries with lower cancer incidence to countries with higher rates of cancer incidence acquire the higher risk in their new country.

The researchers also mathematically surveyed and analyzed recent studies on mutational signatures in cancer, which are regarded as “fingerprints” left on cancer genomes by different mutagenic processes. Some 30 distinct signatures among various cancers were identified. They analyzed the signatures and categorized them as having intrinsic or extrinsic origins. They found that while a few forms of cancer had a greater than 50 percent of intrinsic mutations, the majority of cancers, such as colorectal, lung, bladder and thyroid cancers had large proportions of mutations likely caused by extrinsic factors.

The team also analyzed the SEER (Surveillance, Epidemiologic and End Results Program) data, which showed that many cancers have been increasing in incidence and in mortality, suggesting that external factors contribute heavily to these cancers.

Lastly, they used computational modeling to dissect the contribution of the intrinsic processes in the development of cancer, based on known gene mutations in cancer and the likelihood that they arise from intrinsic mutation rates. They found that when three or more mutations are required for cancer onset (which is a currently accepted parameter), intrinsic factors are far from sufficient to account for the observed risks, indicating small percentages of intrinsic cancer risks in many cancers.

The four methods involved both data- and model-driven quantitative analyses, with and without using the stem cell estimations. The idea behind the overall approach was to assess cancer risk by multiple methods and not by a single type of analysis.

Dr. Hannun concluded that their overall approach “provides a new framework to quantify the lifetime cancer risks from both intrinsic and extrinsic factors, which will have important consequences for strategizing cancer prevention, research and public health.”