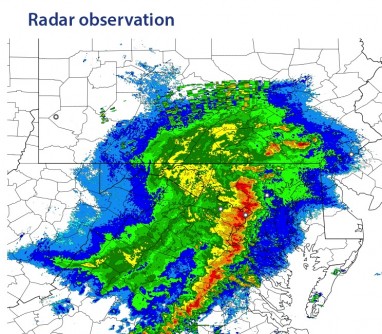 Newswise — Stony Brook, NY, October 11, 2017 – Computer-generated models are essential for or scientists to predict the nature and magnitude of weather systems, including their changes and patterns. Using 19 climate models, a team of researchers led by Professor Minghua Zhang of the School of Marine and Atmospheric Sciences at Stony Brook University, discovered persistent dry and warm biases of simulated climate over the region of the Southern Great Plain in the central U.S. that was caused by poor modeling of atmospheric convective systems – the vertical transport of heat and moisture in the atmosphere. Their findings, to be published in Nature Communications, call for better calculations in global climate models.

The climate models analyzed in the paper “Causes of model dry and warm bias over central U.S. and impact on climate projections,” included a precipitation deficit that is associated with widespread failure of the models in capturing actual strong rainfall events in summer over the region. By correcting for the biases, the authors found that future changes of precipitation over the US Southern Great Plain by the end of the 21st Century would be nearly neutral. This projection is unlike what has been predicted as a drying period by the majority of current climate models. The correction also reduces the projected warming of the region by 20 percent relative to projections of previous climate models.

“Current climate models are limited by available computing powers even when cutting-edge supercomputers are used,” said Professor Zhang. “As a result, some atmospheric circulations systems cannot be resolved by these models, and this clearly impacts the accuracy of climate change predictions as shown in our study.”

Professor Zhang and colleagues believe climate models will become more accurate in the coming years with the use of exsascale supercomputing, now in development worldwide.

About Stony Brook University  Stony Brook University is going beyond the expectations of what today’s public universities can accomplish. Since its founding in 1957, this young university has grown to become a flagship as one of only four University Center campuses in the State University of New York (SUNY) system with more than 26,000 students and 2,600 faculty members, and 18 NCAA Division I athletic programs. Our faculty have earned numerous prestigious awards, including the Nobel Prize, Pulitzer Prize, Indianapolis Prize for animal conservation, Abel Prize and the inaugural Breakthrough Prize in Mathematics. The University offers students an elite education with an outstanding return on investment: U.S. News & World Report ranks Stony Brook among the top 50 public universities in the nation. Its membership in the Association of American Universities (AAU) places Stony Brook among the top 62 research institutions in North America. As part of the management team of Brookhaven National Laboratory, the University joins a prestigious group of universities that have a role in running federal R&D labs. Stony Brook University is a driving force in the region’s economy, generating nearly 60,000 jobs and an annual economic impact of more than $4.6 billion. Our state, country and world demand ambitious ideas, imaginative solutions and exceptional leadership to forge a better future for all. The students, alumni, researchers and faculty of Stony Brook University are prepared to meet this challenge.