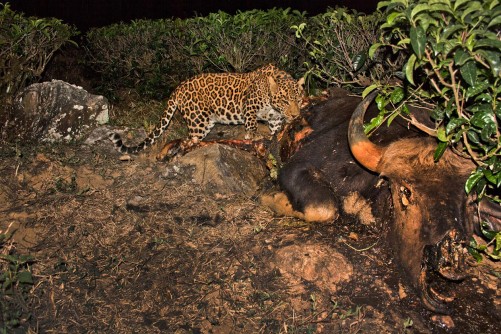 Newswise — A new WCS study finds that leopards are abundant in tea-garden landscapes in north-eastern India, but that their mere presence does not lead to conflicts with people.

The researchers modeled habitat-use by leopards based on leopard signs for the first time in a human-dominated, tea-garden landscape and identified nearly 25 percent of areas having high probability of use by leopards was outside of forested patches. Results show that leopards use tea-gardens due to the availability of dense ground vegetation cover, while avoiding areas with a high density of developed areas.

The collaborative study between WCS, Centre for Wildlife Studies-India, National Centre for Biological Sciences-India, Foundation of Ecological Research Advocacy and Learning, and the West Bengal Forest Department was conducted in a tea-garden and forest mosaic in the northern West Bengal state and covered a densely populated area of approximately 600 sq km. The landscape is defined by a matrix of small protected areas interspersed between vast stretches of tea-gardens, agricultural fields, and villages, and is part of the East–Himalayan biodiversity hotspot.

The study mapped more than 170 locations where people were injured by leopards and interviewed approximately 90 of those injured between 2009 and 2016. More than 350 leopard-human encounters were reported during this period, with five resulting in human fatalities. The authors found no significant relationship between the probability of attack and probability of habitat-use by leopards.

Aritra Kshettry, WCS India Program affiliate and lead author of the study said, “Our results indicate that an increased use of an area by leopards, in itself, does not translate to an increased number of attacks on people. The interviews of victims who were attacked by leopards suggest that these encounters are accidental in nature since most of the attacks resulted in minor injuries and occurred during the day while people were working in the tea plantations.”

This research was supported by the Liz Claiborne and Art Ortenberg Foundation, the Department of Science and Technology, the Government of India, The Rufford Foundation, and IdeaWild. Logistical support was provided by the West Bengal Forest Department.

MISSION: WCS saves wildlife and wild places worldwide through science, conservation action, education, and inspiring people to value nature. To achieve our mission, WCS, based at the Bronx Zoo, harnesses the power of its Global Conservation Program in nearly 60 nations and in all the world’s oceans and its five wildlife parks in New York City, visited by 4 million people annually. WCS combines its expertise in the field, zoos, and aquarium to achieve its conservation mission. Visit: newsroom.wcs.org. Follow on Twitter: @WCSNewsroom. For more information: 347-840-1242.