The History of Lake Cahuilla Before the Salton Sea

Lake Cahuilla, now home to California's Salton Sea, went through many cycles of filling and drying out over thousands of years. A new SDSU study used radiocarbon dating to determine the timing of the last seven periods of filling during the Late Holocene 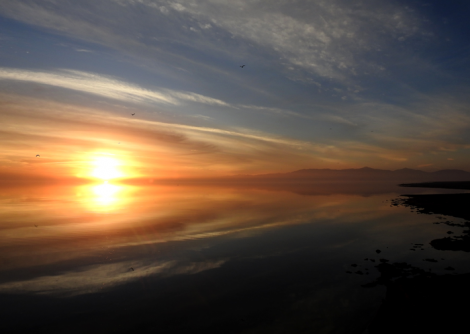 The lakebed now occupied by the Salton Sea was once home to a much larger body of water known as Lake Cahuilla.

Newswise — Today, the Salton Sea is an eerie place. Its mirror-like surface belies the toxic stew within. Fish skeletons line its shores and the ruins of a once thriving vacation playground is a reminder of better days. But long before agricultural runoff bespoiled the Salton Sea, the lakebed it now occupies was home to a much larger body of water known as Lake Cahuilla. The lake was six times the area of the Salton Sea and once covered much of Mexicali, Imperial and Coachella valleys.

“It was a freshwater lake that was about 100 meters deep in its deepest part,” said San Diego State University emeritus professor of geology Tom Rockwell. “It extended from up near Palm Springs southward into Mexico, so it was a very extensive lake.”

Lake Cahuilla has gone through many cycles of filling and drying out over thousands of years. A new study by Rockwell and his colleagues used radiocarbon dating to determine the timing of the last seven periods of filling. The research sheds light on both the history of human occupation in the area and its seismic past.

Lake Cahuilla got its water from the Colorado River. Once a mighty waterway  before it was siphoned off for agriculture and urbanization, the Colorado normally flowed south into the Gulf of California. But periodically, it switched course and began to drain northwest into the Salton Trough, refilling Lake Cahuilla. When full, the water level in the lake could rise to 13 meters above sea level.

“It has this tendency to flip-flop back and forth,” said Rockwell. “But when the Colorado drains to the Gulf of California, Lake Cahuilla would just dry up over a period of 50, 60, or 70 years.”

Sediments from these repeated filling events resulted in fertile soils in the Imperial Valley. An irrigation canal was created around 1900 to bring water from the Colorado River to the Valley for farming, but in 1905, springtime flooding ruptured the canal and gushed toward the Salton Trough, partially refilling the lake to form the Salton Sea. Once the breach was repaired, the water level remained well below that of Lake Cahuilla’s previous incarnations.

To reconstruct its early hydrologic history, Rockwell’s team sampled charcoal, wood, seeds and other organic matter from nearly a dozen in the former lake’s basin. The charcoal samples likely came from cooking fires once used by Indigenous people who inhabited the region.

Historical accounts told of the Colorado River flowing toward the Gulf of California rather than the Salton Trough in 1706, indicating that the lakebed was dry at that time. Based on radiocarbon dating of drowned stumps, Rockwell’s team determined that the last lake to form before the advent of the Salton Sea reached its highest point around 1731.

Based on an approximate rate of evaporation, that would have made it possible to completely dry out by the time Juan Bautista de Anza’s expedition passed through the area in 1774 and reported that the lakebed had no water in it.

Rockwell says dating the lakes will help archaeologists understand when the shorelines of Lake Cahuilla were occupied by humans. The lake was an important food source for Indigenous people during both wet and dry periods.

“There were thriving communities of Cahuilla and Kumeyaay hunter gatherers in the area,” said professor of anthropology Todd Braje, who collaborated with Rockwell on an earlier study of human activity around the lake. “It was a magnet for fishing, for gathering plant resources, for people hunting seasonally in this area.”

When the lake was full, Native Americans would set out fish traps. “Fish would swim into these traps and they would harvest them,” said Rockwell. Remnants of the traps still exist today throughout the lakebed.

During dry periods, Indigenous people made use of the fertile sedimentary soils left by previous inundations.

“When the lake was gone, they would farm portions of the lake bottom,” said Rockwell.

As a geologist, Rockwell is interested in the earthquake history of the San Andreas Fault and several smaller faults that cut through the Salton Trough.

“Once the lakes are dated precisely, I can now sequence all the earthquakes for the last 1100 years for the southern San Andreas system,” said Rockwell.

The weight of the water in the lake and an increase in pore pressure puts stress on the earth’s crust and can trigger earthquakes.

“Most of the last large earthquakes on the southern San Andreas and several on the Imperial Fault occurred when the lake was full,” said Rockwell.

He says the analysis has shifted the estimated date of the most recent major earthquake on the southern San Andreas fault from 1680 to around 1720 or 30, which corresponds with the last filling of the lake.

“That means the time since the last earthquake is about 300 years right now,” said Rockwell. “That's important because the average time between large San Andreas earthquakes there is less than 200 years, which we think is because there’s been no lake for a few hundred years. And eventually it will break. The question is how much has the lack of water delayed the next Southern San Andreas earthquake?”

Braje says the radiocarbon dating Rockwell and his team undertook represents a massive effort to study a place that doesn’t get much attention from researchers.

“This is a really important story about environmental change and the relationship between humans and these environments over a really long time.”

The research is published in the journal Quaternary Science Reviews.

The study comes at a time when the Salton Sea is becoming part of a national conversation about sustainable energy. Brines deep below the lakebed harbor a vast repository of lithium that could one day fuel electric vehicles. California Governor Gavin Newsom recently announced that he has included $80 million in his new proposed budget for an SDSU facility in the Valley to train a local STEM workforce to take on challenges like lithium extraction.

San Diego State University is a major public research institution that provides transformative experiences for its more than 36,000 students. SDSU offers bachelor’s degrees in 96 areas, master’s degrees in 84 fields and doctorates in 23 areas, with additional certificates and programs at regional microsites. SDSU ranks as the number 1 California State University in federal research support, as one of the top public research universities in California. In addition to academic offerings at SDSU, SDSU Imperial Valley and SDSU Georgia, SDSU Global Campus offers online training, certificates and degrees in areas of study designed to meet the needs of students everywhere. Students participate in transformational research, international experiences, sustainability and entrepreneurship initiatives, internships and mentoring, and a broad range of student life and leadership opportunities. SDSU is committed to inclusive excellence and is known for its efforts in advancing diversity and inclusion. SDSU is nationally recognized for its study abroad initiatives, veterans’ programs and support of LGBTQA+ students, as well as its powerhouse Division I Athletics Program. About 50% of SDSU’s undergraduate and graduate students are students of color. The university resides on Kumeyaay land and was most recently recognized as an Asian American Native American Pacific Islander-Serving Institution (AANAPISI). SDSU is also a long-standing Hispanic-Serving Institution (HSI). The university’s rich campus life and location offers opportunities for students to lead and engage with the creative and performing arts, career and internship opportunities with SDSU’s more than 491,000 living alumni, and the vibrant cultural life of the greater San Diego and U.S.- Mexico region.