The Human Ear Detects Half a Millisecond Delay in Sound

Newswise — Hearing is one of the most sensitive of our senses, and even small issues in sound quality can interfere with listening experiences.

Acoustics researchers at Aalto University, in collaboration with professional monitoring loudspeaker manufacturer Genelec, have investigated just how small of a variation in sound delay the human ear can detect in the most sensitive frequency range for hearing. People normally hear sound in the range of 20 and 20,000 hertz.

What makes this study unique is that the researchers studied not only the effect of delays, but also how listeners perceive a negative delay in a range of frequencies. In practice, this means that researchers could determine how sensitively a person hears a sound event in a particular frequency range when it arrives before another sound.

The negative delay, adjusted in fractions of a thousandth of a second, was produced by filters that shift audio selectively at certain frequencies to a different point in time without affecting the magnitude of sound.

‘The frequency-selective, time-reverse filtering technique we use is novel technology in the field of digital signal processing. To achieve a negative delay, we need to move into the future. This phenomenon was produced with software that acts – in a manner of speaking – as a time machine,’ explains Juho Liski, postdoctoral researcher in Aalto University.

In the listening experiment, twelve subjects listened to processed and unprocessed sound, and the researchers studied whether participants were able to reliably distinguish between them. The sounds easiest to identify were a castanet, a percussion instrument, and short clicks.

Researchers recognise that audio is delayed as a function of frequency as it passes through a loudspeaker, but questions have remained on how audible the resulting delay variations in audio are at different frequencies.

‘The study shows that people can hear differences when audio starts at certain frequencies ahead of time. A half of a millisecond delay in certain frequencies relative to others was also audible. The amount of delay needed to exceed the detection threshold varies considerably at different frequencies, but delays were especially heard when sounds started or stopped,’ Välimäki and Liski say when discussing the results.

‘The main goal for our development work is to reproduce complete audio that has been recorded, but nothing extra. It is vital that loudspeakers can create a precise stereo sound stage and reproducing time-accurate sound is a central part of this. Research collaboration with Aalto University deepens our understanding of the accuracy requirements needed to design loudspeakers. We are interested in the limit beyond which a person can no longer perceive improvements when the time precision in reproduced sound improves,’ says Aki Mäkivirta, Genelec's R&D director.

The results of the study have been published in the industry-leading IEEE / ACM Transactions on Audio, Speech, and Language Processing. The article is available open access.

Perceiving auditory delays has been studied at the Aalto University Acoustics Laboratory in recent years in the IMPRESS and IMPRESS2 projects funded by Genelec. 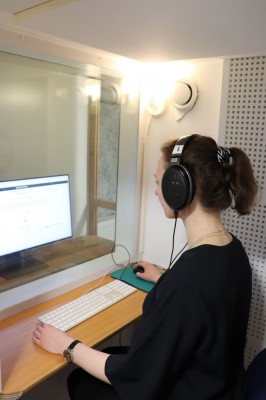 Caption: Test persons focused on the sounds in the listening rooms and recorded their findings on a computer.