The Medical Minute: Quitting smoking sooner could save your life 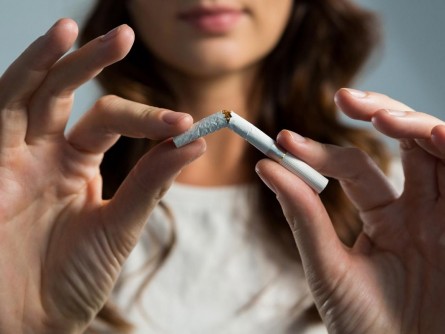 Newswise — Smoking is hazardous to your health. That’s a no-brainer. But a new study led by the American Cancer Society suggests that kicking the habit at a younger age can significantly decrease―or even erase―the risk of dying from lung cancer associated with continuous smoking.

“Smoking definitely has a cumulative effect,” said Dr. Patrick Ma, oncologist at Penn State Cancer Institute. “This study really puts a magnifying glass over the different age groups and characterizes them in a statistical way related to risk of lung cancer fatality.”

Quit by age 45 and potentially lower your risk of death from lung cancer by 87%, according to the study published in JAMA Oncology. Even more surprisingly, stopping smoking by age 35 can effectively eliminate any excess risk of dying from lung cancer, the study showed.

And even middle-aged smokers who quit between ages 55 and 64 cut their lung cancer mortality risk by more than half.

“Of course, the best advice is never start smoking, but this study shows it’s never too late to quit and see some benefit,” Ma said.

Smoking is the leading cause of death from cancer, and previous studies have suggested that those who start smoking earlier are at increased risk. This study, which analyzed data on more than 410,000 Americans participating in an ongoing federal health survey between 1997 and 2014, drills down further.

Overall, the researchers, some of whom are associated with the American Cancer Society, found that smokers died of cancer at three times the rate of nonsmokers. The study did not take into account how heavily people smoked.

Study results can affect public policy, Ma said. Results of this study that correlate smoking at younger ages with increased cancer risk seems to validate the 2019 change in legal age for buying tobacco from age 18 to 21, he said.

Of course, smoking has other adverse health risks in addition to lung cancer, including colon cancer, head and neck cancer, coronary artery disease, congestive heart failure and mesothelioma, Ma said. Addiction to nicotine is also a very hard habit to break, making it even more important to never start, he added.

“This study should not be viewed to mean one can start smoking earlier and stop earlier and get the best of both worlds―that would be an unfair extrapolation of the data,” he said. “The younger you start smoking, the more susceptible you are to DNA damage that carcinogens cause.”

The good news overall is that lung cancer-related deaths are on a downward trend, Ma said. Lung cancer mortality among men has decreased by 51 percent since 1990 and by 26 percent among women since 2002, he said.

Annual scans are recommended for adults ages 50 to 80 who have smoked at least one pack of cigarettes for 20 years and currently smoke or have quit within 15 years.