A video of a dandelion fruit in the University of Edinburgh wind tunnel with the flow visualized using smoke seeding and illuminated using a laser sheet gives the viewer an idea of how the flow moves around the dandelion's parachute. 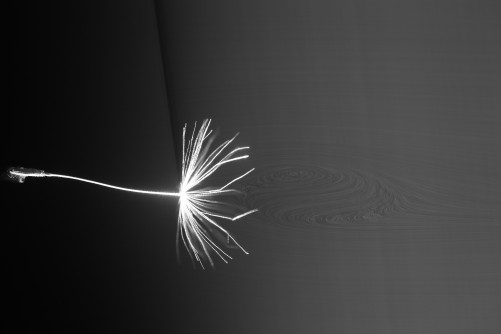 An image of a dandelion fruit in the University of Edinburgh wind tunnel with the flow visualized using smoke seeding and illuminated using a laser sheet gives the viewer an idea of how the flow moves around the dandelion's parachute.

Newswise — WASHINGTON, D.C., November 20, 2017 -- The fluffy dandelion seed head -- that gauzy, white sphere that is really a cluster of seeds on wispy filaments -- infuriates gardeners, but delights physicists. That’s because those seeds may lend key insights into the physics of parachutes, useful for designing small drones, or micro air vehicles (MAVs).

An interdisciplinary collaboration of three groups including researchers in fluid dynamics, micro fabrication and biomechanics at Scotland’s University of Edinburgh will present their findings on the topic at the 70th annual meeting of the American Physical Society’s Division of Fluid Dynamics, held Nov. 19-21, in Denver, Colorado. Investigators reveal why, at low Reynolds numbers, the rules for big parachutes don’t apply to small dandelions. The Reynolds number, the ratio of inertial forces to viscous forces, is often used in engineering to predict whether flow conditions will be turbulent, a high Reynolds number, or laminar. Although the physics and design rules of man-made parachutes are well-understood, until the Edinburgh team’s effort, the flow around the miniature parachute of the dandelion was not.

The answer, according to research team member Cathal Cummins, is in the vortex. “In our work, we uncover the flight mechanism of a parachuting dandelion fruit, and reveal a new type of vortex, responsible for its flight capacity,” Cummins said.

The work can potentially be applied to miniaturizing MAVs useful for remote observation and dispersion in a range of applications, from agriculture to space exploration, especially in conditions hazardous to humans. Their works starts with a parachute model.

“When skydivers jump from high up in the atmosphere, there are many questions to consider,” Cummins said.

The dandelion has evolved a parachute that addressed atmospheric considerations, carrying its seed in slow, steady descent and with minimal use of materials. In terms of physics, the dandelion parachute has evolved to achieve high drag without sacrificing stability, and with very little material -- it’s 90 percent empty space. This leads to a quadrupling of the drag coefficient compared with an impervious membrane, such as a wing section. “Our research could shift the paradigm in the design of small passive flyers such as micro air vehicles,” Cummins said.

Previous models of the dandelion fruit considered that each parachute filament acts independently, and that the total drag force supplied by the parachute can be found by adding up each of these contributions.

“The reality is very different: the dandelion’s flight capacity is enhanced by a ‘neighbouring effect’ of nearby filaments, which act together to generate a separated toroidal vortex (STV) in the wake of the dandelion,” Cummins said.

In the laboratory, researchers showed that building a low-porosity miniature parachute leads to a destabilizing of this STV, and hence a turning moment causing the fruit to spin. By choosing a highly porous parachute, the dandelion allows just enough airflow through its canopy to stabilize this STV, eliminating this turning moment. At the same time, the drag coefficient of the parachute is quadruple that of a low-porosity one. “Our research shows that the dandelion’s parachute is an exquisite example of less is more,” Cummins said.