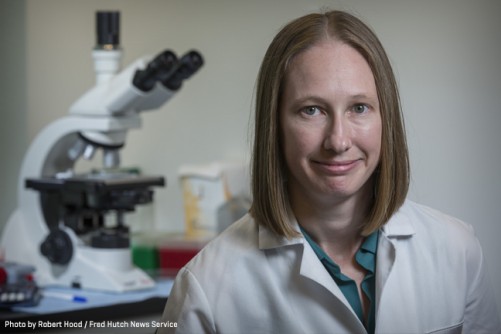 Newswise — SEATTLE — May 30, 2017 — Three out of four patients treated with an experimental combination of three different therapies for the rare skin cancer known as Merkel cell carcinoma are in complete remission following the treatment, according to study results from a small clinical trial led at Fred Hutchinson Cancer Research Center.

Fred Hutch immunotherapy researcher Dr. Kelly Paulson will present results from the study in a poster on Monday, June 5, at the 2017 annual meeting of the American Society of Clinical Oncology in Chicago. ASCO abstract number 3044; poster board number 139.

The trial combined a form of T-cell therapy; a newly FDA-approved immunotherapy drug known as avelumab, a checkpoint inhibitor drug made by EMD Serono; and either radiation or interferon, a general immune system booster that renders the tumors more visible to the immune system. Paulson likens the approach to building a fire.

This small study of four patients built off a previous study, also of four patients, that tested a double combination of just T-cell therapy and radiation or interferon. The patients in that study did not fare as well — three of them saw their cancer progress, and two of those patients have since died.

In their current study, the addition of avelumab seems to have kicked the T cells into high gear, Paulson said. When the researchers tracked the cells in the patients’ bodies, they saw that the immune cells traveled from the bloodstream, where they are administered, to the tumors. And the cells stayed at the tumor sites for months, even when the tumor was no longer clinically detectable.

All four patients who received this triple therapy saw their cancer shrink in response; three of them are now in what’s known as complete remission, where biopsies of their tumor sites show no evidence of remaining cancer cells. The researchers have followed the patients for a median of 12 months since the start of the trial.

Although the trial of triple therapy was small — only four patients have received the therapy and another two are enrolled to begin soon — the researchers didn’t see any unexpected side effects from the therapy. As the researchers expected, patients experienced lymphopenia, or reduced white blood cell counts, and cytokine release syndrome (although none required ICU admission). All these effects were transient, the researchers said.

All eight patients in the two trials had metastatic cancer, or cancer that had spread from its original site throughout the body. Merkel cell carcinoma metastasizes in a third of patients even with prior treatment, and when it does, it’s often deadly — historical five-year survival rates for patients with metastatic disease are less than 10 percent.

T-cell therapy — a form of immunotherapy that manipulates a patient’s own immune cells in the lab to better fight their cancer — is showing promise for certain cancers, primarily blood cancers. But for many cancer patients, especially patients with solid tumors like breast or lung cancer, the promise of T-cell therapy has yet to be delivered.

Paulson, who is also an oncology fellow in the laboratory of Fred Hutch immunotherapy researcher Dr. Aude Chapuis, and her colleagues at the Hutch and the University of Washington had reason to hope this form of immunotherapy would be safe and effective for patients with this rare skin cancer, which afflicts about 2,000 in the U.S. every year, primarily the elderly.

The majority of Merkel cell carcinomas are caused by a nearly ubiquitous virus known as the Merkel cell polyomavirus, and most patients who have the disease have a high level of one of the virus’ proteins present in their tumors — but nowhere else. That situation is an ideal setup for a working T-cell therapy, Paulson said, because therapeutic T cells need to recognize and attack tumor cells but spare healthy cells. T cells that attack both tumor and healthy tissue can lead to toxic side effects. But most cancers house proteins that are also present, albeit at low levels, elsewhere in the body.

For their current study, which is ongoing, only patients who already have T cells that react to the viral protein are eligible. About 15 to 25 percent of Merkel cell carcinoma patients make this kind of T cell naturally, Paulson said. Unlike some other forms of T-cell therapy such as CAR T-cell therapy, in which T cells are engineered in the lab to better recognize cancer cells, this approach uses laboratory manipulations to boost a patient’s own response to their cancer. The researchers extract the cancer-recognizing T cells from the patients’ blood and multiply them in the lab.

Their next step, which Paulson and Chapuis are working on in the lab, is to engineer patients’ cells to recognize the cancerous protein, thereby broadening the therapy’s potential to more patients.

Paulson hopes the team’s work will lead to insights that can apply beyond just this rare cancer.

“These are a really deserving group of patients and I love working on Merkel cell cancer, but I also know that the most impact is going to be made by spreading what we know about Merkel to other cancers,” she said.

At Fred Hutchinson Cancer Research Center, home to three Nobel laureates, interdisciplinary teams of world-renowned scientists seek new and innovative ways to prevent, diagnose and treat cancer, HIV/AIDS and other life-threatening diseases. Fred Hutch’s pioneering work in bone marrow transplantation led to the development of immunotherapy, which harnesses the power of the immune system to treat cancer. An independent, nonprofit research institute based in Seattle, Fred Hutch houses the nation’s first NCI-designated cancer prevention research program, as well as the clinical coordinating center of the Women’s Health Initiative and the international headquarters of the HIV Vaccine Trials Network.