University of Rhode Island, BayCare and Butler Hospital team up to test retinal scanning for early detection of Alzheimer's disease 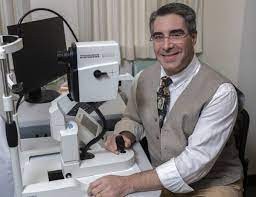 Newswise — The University of Rhode Island, in collaboration with BayCare Health System in Florida and The Memory and Aging Program at Butler Hospital, an affiliate of The Warren Alpert Medical School of Brown University, is launching a clinical trial of retinal screening processes that could help clinicians detect Alzheimer’s disease possibly two or more decades before patients develop life-altering clinical symptoms.

Principal investigators for the study are Peter Snyder, Ph.D., URI vice president for research and economic development and professor of biomedical and pharmaceutical sciences, and Stuart Sinoff, M.D., who specializes in neuro-ophthalmology and is a medical director of Neurosciences for BayCare Health System’s West Region in Pinellas County. According to the two researchers, the objective is to create a gold standard reference database of structural, anatomic and functional imaging of the retina to enable the identification and development of sensitive and reliable markers of early Alzheimer’s disease and/or risk progression.

The problem now is that one of the central diagnostic tools for Alzheimer’s disease, positron emission tomography (PET) scanning devices, which can detect amyloid protein plaques (a toxic protein that interferes with normal brain function), are expensive. While they can detect brain pathology related to Alzheimer’s disease well before symptoms develop, the costs for such machines run into the millions and one test currently costs as much as $4,500. So, PET scans are often done after patients become symptomatic and when drug therapies may no longer be effective in slowing the disease in its earliest stages. Snyder also notes that a large portion of the world’s population does not have access to PET scans.

“When our study is completed, we want to make the technology available so that optometrists and ophthalmologists could screen for the retinal biomarkers we believe are associated with Alzheimer’s disease and watch them over time,” Snyder said. “If clinicians see changes, they could refer their patients to specialists early on. We believe this could significantly lower the cost of testing. We may then identify more people in the very earliest stage of the disease, and our drug therapies are likely to be more effective at that point and before decades of slow disease progression.”

Snyder and Sinoff are working with Stephen Salloway, M.D., director of Neurology and the Memory and Aging Program, Butler Hospital and Martin M. Zucker professor of psychiatry and human behavior, professor of neurology, Alpert Medical School of Brown University, who is a world-leading clinical trials expert in Alzheimer’s disease, and Jessica Alber, Ph.D., URI assistant professor of research and cognitive neuroscientist, who completed her post-doctoral fellowship in the Department of Psychiatry and Human Behavior at the Alpert Medical School of Brown University with Salloway and Snyder. There are 14 other collaborators, including neuropsychologists, social workers, optometrists, nursing staff and students.

“We are very grateful to be working with some of the leading researchers in the field from BayCare, Butler Hospital and Brown University on this important study,” Snyder said. “Drs. Sinoff, Salloway, Alber and I have already been publishing together in this area.  I am honored that Dr. Salloway is leading our clinical site at Butler Hospital, and our work there will be tightly coordinated with the efforts on this study at BayCare’s two flagship hospitals in Florida.”

“Modern health care is perhaps a victim of its own success,” Sinoff said. “With an ever increasing human lifespan, we find ourselves faced with a rapidly expanding group of people in cognitive decline.  And there’s also the unanticipated ballooning of the price tag for dementia care. ARIAS is structured to address both.

“Speaking for the Florida sites, Morton Plant Hospital and St. Anthony’s Hospital, and with special homage to the generous support from the Morton Plant Mease Health Care Foundation who have made ARIAS possible, I am truly honored to work with Drs. Snyder, Alber and Salloway, partnering to establish a cost-effective biomarker panel that will identify people in the earliest stages of Alzheimer’s disease possible.”

“We are excited to be participating with the ARIAS team from URI and BayCare on this landmark study,” Salloway said.  “The ARIAS study closely aligns with the mission of Butler Hospital and Brown University to develop new approaches to detect Alzheimer’s risk early and keep the brain healthy so memory loss never occurs.”

The ARIAS study is unique in its focus on preclinical stage disease, and its emphasis on viewing the retina as a complex biological system, requiring that researchers view the retina in many different ways at the same time.  For example, pictures of the retinas of participants will be taken with very special blue, green and infrared lasers that are completely safe, but will allow for a microscopic look at its anatomy, changes in pigment chemicals as well as the movement of red blood cells in the retina.

“The cells in the neuronal layers of the retina are the same types as cells in the brain that are attacked by the disease, so cell changes in the retina might reflect the same changes that are happening in the brain,” Snyder said. “We can look more easily in the retina to see the effects of disease on the way blood is carried to brain and retinal cells.  We are also using a very new laser imaging technique that makes the chemical pigments in the retina fluoresce, and we think atypical changes in the amount of these chemicals might signal high risk for Alzheimer’s disease.”

The ARIAS study will enroll 330 individuals between the ages of 55 and 80 years old, ranging from very healthy and low-risk adults, to persons with concerns about their memory, as well as patients with mild Alzheimer’s disease.  Each participant will be examined at four different points over a three-year period, and each study visit includes an eye exam, a medical history discussion, some tests of how people think and how well they remember new information, the retinal imaging that is very much like the kind done at the eye doctor’s office, and measures of mood, walking and balancing, sleep habits and other types of medical information.

If you are interested in donating your time to participate in this important study, and if you live near Providence, Rhode Island, please contact the Butler Alzheimer’s Prevention Registry butler.org/alzregistry or call 401-455-6402.

If you live near Tampa, Clearwater or St. Petersburg in Florida, and you are interested in finding out more about the study, please call Catrina Montgomery at 727-298-6077.

About the University of Rhode Island

The University of Rhode Island is a competitive and highly regarded public institution in New England and beyond. Founded in 1892, the University is the principal public flagship research and graduate institution in Rhode Island, enrolling about 14,650 undergraduate students and more than 2,240 graduate students. The University is known regionally and worldwide for its big ideas and pioneering research in air, water, and ground pollution; biotechnology and life sciences; engineering, marine sciences, forensic sciences, neuroscience, pharmaceuticals, the behavioral sciences and public health promotion.  URI is home to The George & Anne Ryan Institute for Neuroscience, which brings together a pioneering team of scientists noted for their contributions to under-explored factors in brain health—including the roles of inflammation, the immune system, and blood vessels in the development of neurodegenerative diseases like Alzheimer’s

BayCare is a leading not-for-profit health care system that connects individuals and families to a wide range of services at 15 hospitals and hundreds of other convenient locations throughout the Tampa Bay and central Florida regions. Inpatient and outpatient services include acute care, primary care, imaging, laboratory, behavioral health, home care, and wellness. Our mission is to improve the health of all we serve through community-owned, health care services that set the standard for high-quality, compassionate care. For more information, visitwww.BayCare.org.

Butler Hospital, a member of Care New England, is the only private, nonprofit psychiatric and substance abuse hospital serving adults, seniors and adolescents in Rhode Island and southeastern New England. Founded in 1844, it was the first hospital in Rhode Island and has earned a reputation as the leading provider of innovative psychiatric treatments in the region. The Major Affiliated Teaching Hospital for Psychiatry and Behavioral Health at The Warren Alpert Medical School of Brown University, Butler is recognized worldwide as a pioneer in conducting cutting-edge research. For more information, visit butler.org.

Link for photos and BRoll