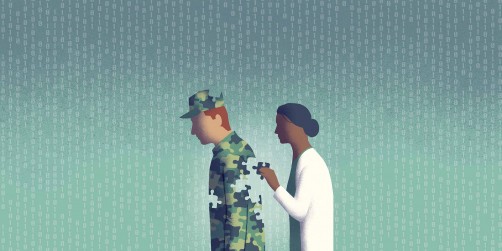 People with PTSD have an increased learning response to surprising events compared to people without PTSD, according to a new study led by Pearl Chiu, an associate professor at the Virginia Tech Carilion Research Institute.

Newswise — Fireworks on nights other than July 4 or New Year's Eve might be due to nothing more than inconsiderate neighbors, but for veterans with Post Traumatic Stress Disorder (PTSD), the shock of noise and light may trigger a deeply learned expectation of danger.

Scientists at the Virginia Tech Carilion Research Institute (VTCRI) have found that people with PTSD have an increased learning response to surprising events. While most everyone reacts to surprise, people with PTSD tend to pay even more attention to the unexpected.

The study was published this week in eLife, an open-access journal published by the Howard Hughes Medical Institute, the Max Planck Society, and the Wellcome Trust.

"Disproportionate reactions to unexpected stimuli in the environment are a core symptom of PTSD," said Pearl Chiu, an associate professor at the VTCRI and the lead author on the study. "These results point to a specific disruption in learning that helps to explain why these reactions occur."

Chiu and her team used functional MRI to scan the brains of 74 veterans, all of whom had experienced trauma while serving at least one combat tour in Afghanistan or Iraq. Some of the study participants were diagnosed with PTSD, while others were not. In the functional MRI, participants played a gambling game, in which they learned to associate certain choices with monetary gains or losses.

"Computer science and mathematics have given us new tools to understand how the brain learns. We used these tools to study whether and how learning might play a role in PTSD," said Chiu, who is also an associate professor of psychology in Virginia Tech's College of Science. "These results suggest that people with PTSD don't necessarily have a disrupted response to unexpected outcomes, rather they pay more attention to these surprises."

The researchers found that people with PTSD had significantly more activity in the parts of their brains associated with how much attention they paid to surprising events when the learning task threw an unexpected curve ball their way.

"Fireworks unexpectedly going off after a person has exchanged fire in the field can trigger an over-estimation of danger," said Brooks King-Casas, an associate professor at the VTCRI who co-led the study. "Particularly for individuals with PTSD, unexpected surprising events--noise or otherwise--could be a matter of life or death. The study shows that while everyone is affected by unexpected events, in PTSD extra attention is given to these surprises."

Earlier studies have connected greater attention to perceived threats and unexpected events in PTSD, but the mechanistic underpinning of this hypersensitivity to unexpected outcomes have been unclear until now.

"The work by Brown and colleagues is an important step forward to be able to differentiate the brain and behavioral processes that are affected as a consequence of post-traumatic stress," said Martin Paulus, a medical doctor and the scientific director and president of the Laureate Institute for Brain Research in Tulsa, Oklahoma. He was not involved in this study. "The finding that individuals with PTSD have difficulty appropriately allocating attention to their environment when it changes has clear implications for the development of novel behavioral interventions."

Vanessa Brown, first author on the paper and a graduate student in the department of psychology in Virginia Tech's College of Science, said that both the behavioral and neural findings show that people with PTSD pay more attention to surprise while learning.

"This disrupted learning increases with more severe PTSD," said Brown, who is conducting her dissertation research in Chiu's laboratory at the VTCRI. "Now that we understand how attention to surprise plays a role in PTSD, we may be able to refine our assessment tools or develop new interventions that target specific learning disruptions in people with PTSD or other psychiatric disorders."

Other contributors to this study include Lusha Zhu, a postdoctoral researcher at VTCRI; John M. Wang, a graduate student in the department of psychology in Virginia Tech's College of Science who studies in Chiu's laboratory at the VTCRI; and Christopher Frueh, a clinical psychologist and professor of psychology at the University Hawaii at Hilo, with an appointment in the Menninger Department of Psychiatry and Behavioral Sciences at Baylor College of Medicine.