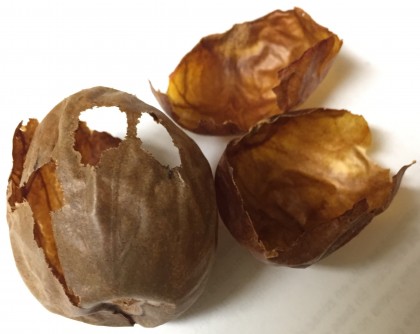 Avocado seed husks contain numerous chemical compounds that could be used in medicine and industry.

A press conference on this topic will be held Monday, Aug. 21, at 3 p.m. Eastern time in the Walter E. Washington Convention Center. Reporters may check-in at the press center, Room 154A, or watch live on YouTube http://bit.ly/ACSLive_DC. To ask questions online, sign in with a Google account.

Newswise — WASHINGTON, Aug. 21, 2017 — The least appreciated part of an avocado could soon undergo a trash-to-treasure transformation. In a first-of-its-kind study, scientists report that avocado seed husks, which are usually discarded along with the seed, are hidden gold mines packed with a previously unrecognized plethora of chemical compounds. They say these compounds could eventually be used to treat a host of debilitating diseases, as well as to enhance the allure of cosmetics, perfumes and other consumer goods.

The researchers are presenting their work today at the 254th National Meeting & Exposition of the American Chemical Society (ACS). ACS, the world’s largest scientific society, is holding the meeting here through Thursday. It features nearly 9,400 presentations on a wide range of science topics.

“It could very well be that avocado seed husks, which most people consider as the waste of wastes, are actually the gem of gems because the medicinal compounds within them could eventually be used to treat cancer, heart disease and other conditions,” says Debasish Bandyopadhyay, Ph.D. “Our results also suggest that the seed husks are a potential source of chemicals used in plastics and other industrial products.”

In all, nearly 5 million tons of avocados are produced worldwide annually. Americans consume almost 1.9 billion pounds each year, according to the Hass Avocado Board. In most cases, the “meat,” or flesh, is eaten and the seed is tossed in the trash. Some edible oil manufacturers extract avocado oil from the seeds, but they remove the husk surrounding the seed and discard it before processing. Bandyopadhyay and his students Valerie Cano, Orlando Castillo, Daniel Villicana and Thomas Eubanks at the University of Texas Rio Grande Valley sought to find out more about what manufacturers are really throwing away when they discard these seed husks.

The researchers ground about 300 dried avocado seed husks into 21 ounces of powder. After additional processing, the powder yielded about three teaspoons of seed husk oil and slightly more than an ounce of seed husk wax. Using gas chromatography–mass spectrometry analysis, the research team found 116 compounds in the oil and 16 in the wax. Many of these compounds do not appear to be found in the seeds themselves.

Among the constituents in the oil was behenyl alcohol (also known as docosanol), an important ingredient used in anti-viral medications; heptacosane, which might inhibit the growth of tumor cells; and dodecanoic acid, which increases high density lipoprotein (known as HDL) and, as a result, could reduce the risk of atherosclerosis.

In the wax, the researchers detected benzyl butyl phthalate, a plasticizer used to promote flexibility in numerous synthetic products from shower curtains to medical devices; bis(2-butoxyethyl) phthalate, which is used in cosmetics; and butylated hydroxytoluene (BHT), which is a food additive.

Moving forward, Bandyopadhyay says his team will modify several of these natural compounds so that they can be used to create better medications with fewer side effects.

Bandyopadhyay acknowledges funding from the Center of Excellence in STEM Education (College of Sciences) at The University of Texas Rio Grande Valley.

Random removal of food wastes is one of the major environmental hazards around the globe. Annually about 15 million metric tons of foods are wasted in the U.S. and 1.6 billion metric tons around the world. Increasing efforts are continuing to utilize these foodstuff and related wastes in appropriate manner. Avocado (Persea americana) is a widely used healthy vegetable that contains a comparatively big seed. Mostly the seeds are thrown away as waste although oil is extracted in some cases but the husk is still thrown away. This is of great interest because, in general, the seed itself is considered as waste in our daily use. Accordingly, husk itself is considered as the waste of waste. The current project is set to focus on the chemical constituents that can be extracted from the avocado husk. Accordingly, the topic of interest is based on the waste (husk) of a waste (seed). Up to now oil and wax have been successfully extracted from the husk following cold extraction procedure and characterized by GC-MS analysis. The finding of this ongoing research will be presented.