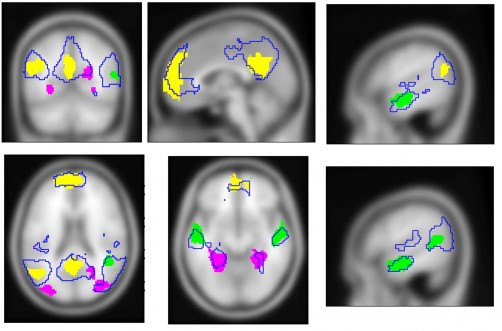 Simultaneous activity of three cognitive systems found in the study

Newswise — Our mental life is rich with an enormous number of internal experiences. The diversity of these experiences is astonishing. We can vividly recall an episode from childhood as well as what we did just five minutes ago. We can imagine and plan in detail our next vacation. We can be moved to tears by the story of an absolute stranger or even of a fictitious character. How does the brain achieve this magic?

A new study published in the journal Nature Human Behaviour may bring us closer to understanding this challenging phenomenon. The study was carried out by Dr. Vadim Axelrod and Prof. Moshe Bar, from the Gonda (Goldschmied) Multidisciplinary Brain Research Center at Bar-Ilan University, and Prof. Geraint Rees, from the Institute of Cognitive Neuroscience at University College London.

The researchers scanned forty-one healthy volunteers using functional MRI. The participants took part in four different experiments. The authors used three of the experiments to identify three brain systems. The main result was that these three systems were active at the same time during the fourth experiment. In other words, the researchers showed that internal experiences, such as recalling personal memories, are associated with the simultaneous activity of different cognitive systems.

It might sound like science fiction that it was possible to see separate components of internal thoughts of the participants as they were lying in the MRI with their eyes closed and recalling their personal lives. “Obviously, our internal experience is mediated by much more than three cognitive systems. We hope that the approach we used will help in the future to identify additional systems,” summarize the scientists.