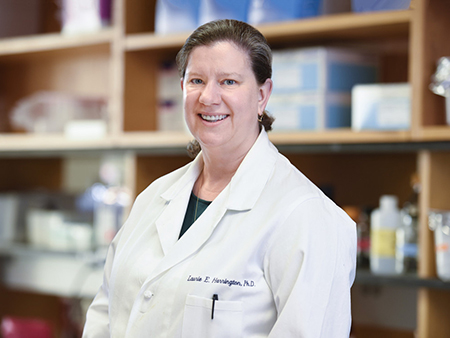 Both cells differentiate from the same precursors — naïve CD4 T cells — and the beginning of their change to either Th17 or Treg cells starts with the same signal. Subsequently, a fate decision occurs, like a fork in the road, steering the changing CD4 cells to become either inflammatory T cells or regulatory T cells.

New, preclinical research, led by Laurie Harrington, Ph.D., associate professor in the UAB Department of Cell, Developmental and Integrative Biology at the University of Alabama at Birmingham, shows a pivotal role for cellular metabolism to regulate that fate decision, a decision that occurs very early in the activation of CD4 T cells. This opens a possibility that manipulating the cellular metabolism of T cells may provide a new, promising therapeutic intervention to modulate the balance between pathogenic Th17 and Treg cells in chronic autoimmune disorders. The research is published in the journal Cell Reports.

Upon activation, T cells were known to rapidly increase metabolism, including glycolysis and mitochondrial oxidative phosphorylation, or OXPHOS, to meet the energetic demands of differentiation. But the precise contribution of OXPHOS to that Th17 differentiation was not defined.

The UAB researchers, and one colleague at New York University, found that ATP-linked mitochondrial respiration during Th17 differentiation was essential to upregulate glycolysis and the TCA cycle metabolism. Strikingly, it also was essential to promote inflammation of the central nervous system by Th17, as shown in a mouse model for multiple sclerosis.

In the mouse model, experimental autoimmune encephalitis, Th17 cells cause the disease progression. For the experiment, harvested CD4 T cells were differentiated using a combination of Th17-polarizing cytokines. One group was the polarized control, and one group was polarized in the presence of oligomycin, an inhibitor of mitochondrial OXPHOS. Then the T cells were transferred into experimental mice. Mice receiving the T cells treated with oligomycin during polarizing conditions showed a significantly delayed onset of disease and reduced disease severity. Both groups of T cells proliferated robustly after transfer.

In mechanistic experiments, the researchers detailed the early molecular events that differ between cells polarized in the presence or absence of oligomycin. These included gene sets that are upregulated or downregulated, presence or absence of Th17 or Treg cell markers, expression of signature transcription factors needed for Th17 differentiation, and expression of gene products that play a role in T cell receptor signaling.

A surprise was found in the timing of the fate decision. In an experiment, CD4 T cells were exposed to Th17-polarizing conditions with oligomycin present only during the first 24 hours. They were then washed and allowed to continue differentiation in the polarizing conditions. The effects of this brief exposure to oligomycin were T cells that lacked Th17 markers and instead showed hallmarks of Treg cells, including expression of Foxp3. Thus, the brief early exposure to oligomycin imprinted the Foxp3 fate decision.

At UAB, Darley-Usmar holds the Endowed Professorship in Mitochondrial Medicine and Pathology.