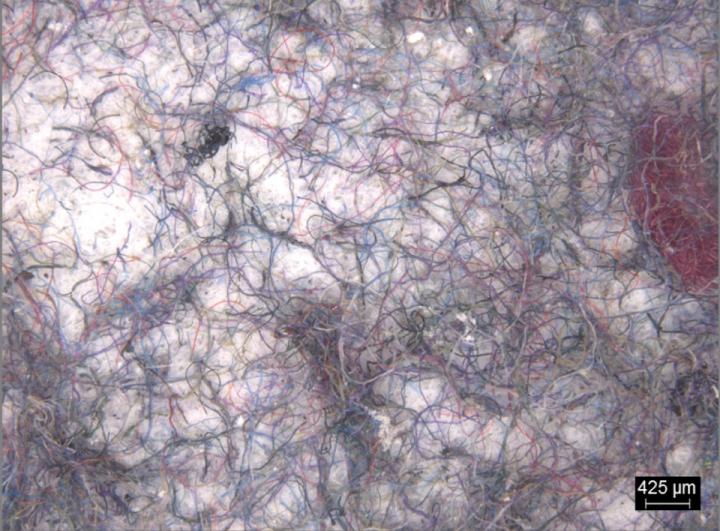 These are microfibers filtered from washing loads, viewed under a microscope

Newswise — Those nice new clothes you got for Christmas or in the new year sales might just last longer, thanks to advice from scientists researching the impact washing machines have on clothes and the environment.

Academics from the University of Leeds and specialists from Procter & Gamble, makers of Ariel, Daz, Bold, Fairy and Lenor, have wrung out new insight into how laundering clothing affects fading, colour runs and microfibre release.

Every load of washing releases hundreds of thousands of microfibres - tiny strands that are flushed down the drain. Many reach beaches and oceans where they can remain for many years and be swallowed by sea creatures.

In what is the first research into wash cycle duration that used both laboratory and real consumer testing, they found that reducing both washing cycle length and water temperature can significantly extend the life of garments and reduce the quantity of dye and microfibres shed into the environment.

Report lead author Lucy Cotton, from the University's School of Design, said: "We are increasingly familiar with the environmental threat posed by throwaway fast fashion, but we also know that consumers claim their clothes can lose their fit, softness and colour after fewer than five washes - this means it's more likely they will ditch them long before they are worn out.

"Using shorter, cooler washes is a simple way everyone can make their clothes last longer and keep them out of landfill."

Conventional domestic washing machines and Ariel pods of biological detergent were used, comparing 30 minute cycles at 25°C, and 85 minute cycles at 40°C (both with 1,600rpm spins) for 16 cycles each. The research was repeated and validated with authentic loads of dirty laundry provided by UK consumers.

A series of tests were carried out on the garments and fabric squares, and the washing machine waste water analysed. Chemical analysis distinguished individual dyes washed out of the clothing, and microfibres were collected and weighed.

The researchers found washing with a quicker, cooler cycle reduced the amount of microfibre release into the environment by up to 52%, and cut dye release by up to 74%.

Dr Blackburn, who heads the Sustainable Materials Research Group at Leeds, said: "Our findings can help tackle the issue of 'invisible' plastics in the environment.

"Synthetic microfibres are released every time textiles are washed and account for more than a third of all plastic reaching the ocean. But microfibres from cotton and other natural sources are found in even greater numbers in the sea, and we're worried about their impact too.

"Our research shows that consumers can actively reduce the number of microfibres released from their own clothing simply by washing in quicker, cooler cycles."

What is more, washing clothes at 20°C rather than 40°C saves approximately 66% of the energy used per load - according to the Energy Saving Trust, providing even more reason to use quicker, cooler cycles to reduce energy use and CO2 emissions.

Dr Lant, a Procter & Gamble Research Fellow, added: "Advances in detergent technology, especially in sustainable ingredients such as enzymes, are allowing consumers to get excellent cleaning results in colder and quicker washes.

"It's well known that these cycles reduce our energy bills and carbon footprint, but our partnership with the University of Leeds is helping us understand how they also slow down the ageing of clothes - keeping us looking smart, saving us money replacing garments and helping the environment. It's a real win win win."

"Improved garment longevity and reduced microfibre release are important sustainability benefits of laundering in colder and quicker washing machine cycles" is published on 14 January 2019 in Dyes and Pigments.

The research was funded by Procter & Gamble and the Engineering and Physical Sciences Research Council, which provided an industrial CASE studentship to Dr Cotton to allow her to conduct her PhD studies.

For copies of the paper, interview requests and other media enquiries, contact University of Leeds Media Relations Manager Gareth Dant via +44(0)113 343 3996 or [email protected].