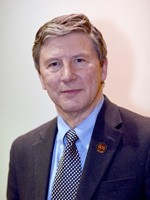 Newswise — Bethesda, Md. (May 24, 2017)—Dennis Brown, PhD, assumed the presidency of the American Physiological Society (APS) in April, immediately following the APS annual meeting at Experimental Biology 2017. Brown is a professor of medicine at Harvard Medical School (HMS) and director of the Massachusetts General Hospital (MGH) program in membrane biology in the division of nephrology. He also serves as associate director of the MGH Center for Systems Biology and director of the MGH Office for Research Career Development (ORCD).

“I sincerely thank the APS membership and leadership for their confidence in me, and it goes without saying that I will do my very best to help the Society increase its influence and standing as real science struggles to be heard and respected in this ‘post-truth’ era,” Brown wrote in his presidential editorial in The Physiologist. “And so here I am with the questions ‘what can we do to help our members?’ and ‘how can we promote our discipline?’

“There has been much wringing of hands related to the decline of physiology over the years,” Brown noted. “In fact, although the word ‘physiology’ has indeed shown a tendency to disappear from department and division names in universities and academic medical centers in the U.S. and throughout the world, the number of investigators ‘using’ physiology in their studies has probably never been greater; indeed, in the post-genomic era, the need for physiological studies has never been more important.”

As one of his presidential goals, Brown underscored the need to reach out to life scientists who may not consider themselves physiologists and welcome them under the APS umbrella. “Our task at this time is to provide a welcoming and integrative society to all who work in the life sciences. My belief is that we need to focus on promoting the science itself (physiology and beyond) through our 12 sections and nine interest groups, rather than attaching a particular label to an investigator and his/her area of expertise. In this way, we may succeed in broadening the scope and depth of our membership.”

Read more about his plans during his presidency in The Physiologist.

Dennis Brown is professor of medicine at Harvard Medical School (HMS) and is director of the program in membrane biology in the division of nephrology at the Massachusetts General Hospital (MGH). He also serves as the associate director of the MGH Center for Systems Biology and director of the MGH Office for Research Career Development (ORCD).

Brown is a cell biologist/physiologist who specializes in the use of state-of-the-art imaging techniques to follow and dissect physiologically relevant membrane protein trafficking events in epithelial and non-epithelial cells. He is an internationally recognized authority on vesicle trafficking and polarity in epithelial cells, with special focus on water channels (aquaporins) in principal cells and vacuolar proton pumping ATPase function in intercalated cells of the kidney collecting duct. His work is aimed at understanding basic cell physiology and signaling pathways in order to develop novel therapeutic strategies for kidney disease. In particular, Brown has made significant contributions toward our understanding of the cell biology of vasopressin (antidiuretic hormone) action and aquaporin 2 trafficking that inform the development of strategies to bypass defective vasopressin signaling in nephrogenic diabetes insipidus. Most recently, for example, his lab reported that the EGFR inhibitor Erlotinib significantly ameliorates the diuretic action of lithium in a mouse model (Cheung et al., Journal of the American Society of Nephrology, 2016). In recent years, he has also had an extensive collaboration with his colleague Sylvie Breton on transport and trafficking processes in epithelia of the male reproductive tract (epididymis) that are essential for male fertility. He has published over 370 articles in peer-reviewed journals.

As director of MGH’s ORCD, Brown has a long track record of developing young scientists, both basic researchers and clinical investigators. Many of these are in leadership positions in universities in the U.S. and throughout the world. He was awarded the prestigious A. Clifford Barger “Excellence in Mentoring” award from Harvard University in 2005 and received the HMS Dean’s Award for the Advancement of Women in Science in 2012. Brown has received numerous additional awards from MGH, APS and other scientific research organizations and has held a number of appointments at the National Institutes of Health.

Brown was born in a small fishing town on the east coast of England called Grimsby which was made famous as the title of a tongue-in-cheek song “Grimsby” on the 1974 Elton John album Caribou, as the name Disney gave to the butler in “The Little Mermaid” and most recently by the Sacha Baron Cohen movie “The Brothers Grimsby.” He has been married to his wife, Andrea, (also a PhD) for 40 years and has three grown children of whom he is very proud. In his spare time, he is an avid photographer, soccer fan, reader of nonfiction books and biographies, and a vinyl audiophile.

NOTE TO JOURNALISTS: For more information, contact Stacy Brooks at [email protected] or 301-634-7209.

Physiology is the study of how molecules, cells, tissues and organs function in health and disease. Established in 1887, the American Physiological Society (APS) was the first U.S. society in the biomedical sciences field. The Society represents more than 11,000 members and publishes 14 peer-reviewed journals with a worldwide readership.