A new study has found that declining groundwater levels within the states of Kansas, Nebraska and Colorado are dramatically altering the diversity of fish species available in the region and the make up of the streams and rivers they populate within the Great Plains. 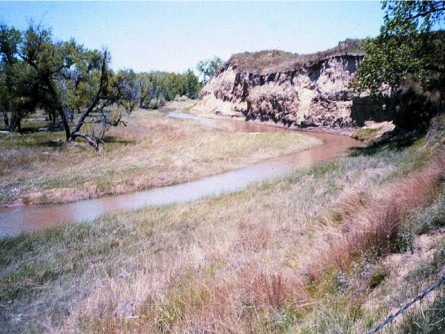 A section of the Arikaree River in northwest Kansas in 1996 shows a narrow stretch of water. 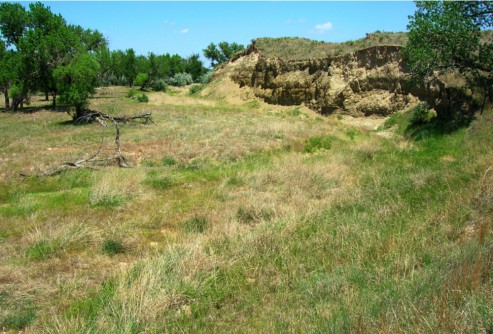 A section of where the water of the Arikaree River used to flow in northwest Kansas in 2006.

This photo taken before 1990 shows a wide Arikaree River in Cheyenne County. 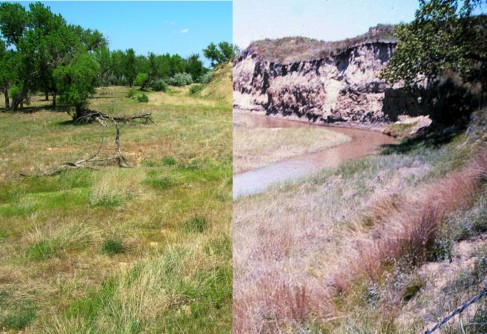 The plains minnow is one of the species of fish most at risk in Kansas because of a decrease in habitat.

Newswise — MANHATTAN, KANSAS — The food web in Great Plains streams could be unraveling, according to a Kansas State University ecologist.

Keith Gido, professor of biology, and Josh Perkin, a Kansas State University alumnus, recently published "Groundwater declines are linked to changes in Great Plains stream fish assemblages" in the Proceedings of the National Academy of Sciences. The research maps the loss of stream habitat for many small fish in the Great Plains region and attributes it to declining groundwater sources.

"This is one of the first examples that links groundwater depletion to changes in the biotic communities of the river," Gido said. "We've lost more than 350 miles of stream in the last 65 years because of a reduction in the groundwater, and we expect we will lose another 180 miles of stream by 2060."

According to the research, the reduction of the region's streams is changing the fish community. Several species of fish that were once plentiful in the Great Plains and serve an important role in the food web are no longer found in the area.

"One of our main findings is a transformation of the fish community," Gido said. "We are seeing fish communities change from species that are adapted to large, free-flowing rivers to species that occupy small streams with isolated habitats."

The fish that have already been lost or are most at risk in Kansas streams include the plains minnow and the shoal chub. Even several species such as the red shiner and sand shiner, which were thought to be plentiful, are declining as a result of reduced stream habitat, according to Perkin, who was the lead researcher for the study and is now an assistant professor at Texas A&M University.

"Not only have today's rare fish — once common in Kansas — continued to decline, but we also found evidence that the fish that are common today may become rare fish in the future if this problem isn't addressed," Perkin said.

Gido said that even though the fish documented as declining in the study may not have sport fish status like walleye and bass, these smaller fish still have great importance in the diversity and food web of Kansas streams.

"Many of the species that we documented in this paper are not used for recreational purposes but are still an important part of the ecosystem," Gido said. "The larger predators that more humans enjoy for recreational fishing might have some dependency on those smaller species and the consequences of losing those species are very uncertain."

All species of at-risk fish prefer larger, fast-flowing waters and reproduce by spawning above the riverbed so the eggs float downstream. The 2011 and 2012 droughts combined with decreasing groundwater that feeds the streams and many dams have changed the fish habitat and prevent fish from swimming back upstream to start the reproductive cycle over again, Gido said.

Gido, Perkin and their colleagues at the U.S. Geological Survey, Colorado State University, Colorado Parks and Wildlife, Westar Energy and The Nature Conservancy used groundwater well data from the 1950s to 2010 to track the rate of change in the water table of the High Plains Aquifer. They compared it to the historic record of how the fish community has changed at the same time. From there, they were able to calculate predictions for the next 50 years.

Other biologists in the region have documented similar patterns of change. Ryan Waters, stream ecologist with Kansas Department of Wildlife, Parks and Tourism, has pictures taken several decades apart of a northwest Kansas section of the Arikaree River, which was included in the study. Waters' photos compared to a photo before 1990 from Suzanne Collins, professional wildlife photographer, show a wide river before 1990, a narrower river in 1996 and no water in 2006. According to Gido, the decreased flow in the streams like the Arikaree is attributed to a depleted aquifer, or water table, in the Great Plains.

Gido and his students are trying to help the species overcome difficulties. They have worked with the Kansas Department of Wildlife, Parks and Tourism and the city of Wichita to evaluate the use of fish ladders at dams that allow fish to swim upstream. Gido also has consulted with the Kansas Aquatic Biodiversity Center at the Farlington Fish Hatchery near Girard as the hatchery begins breeding some of the most threatened species to stock Kansas streams and rivers, much like agencies already do for sport fish.

"My career has shifted to where I'm really trying to use our research to facilitate these conservation actions on the ground," Gido said. "We still do our research but at the end of the day, to sleep well at night, it really helps me feel like I've done something important if I'm helping with conservation, too." 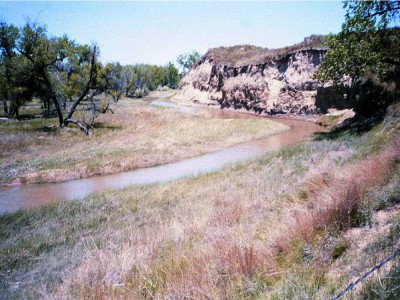 Caption: A section of the Arikaree River in northwest Kansas in 1996 shows a narrow stretch of water. 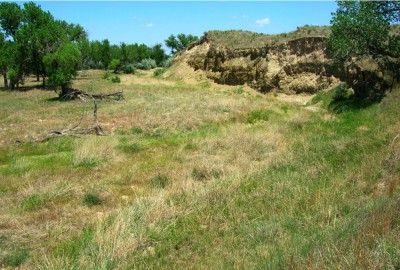 Caption: A section of where the water of the Arikaree River used to flow in northwest Kansas in 2006. 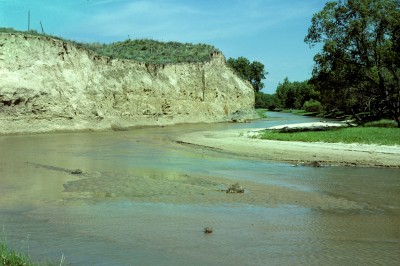 Caption: This photo taken before 1990 shows a wide Arikaree River in Cheyenne County. 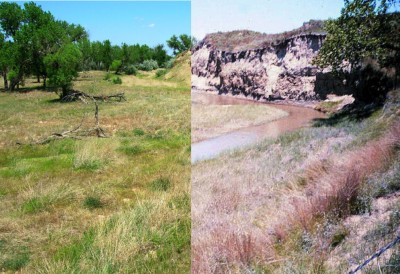 Caption: A comparison of a section of the Arikaree River in northwest Kansas in 2006 on the left and in 1996 on the right shows the decreased water flow

Caption: The plains minnow is one of the species of fish most at risk in Kansas because of a decrease in habitat.