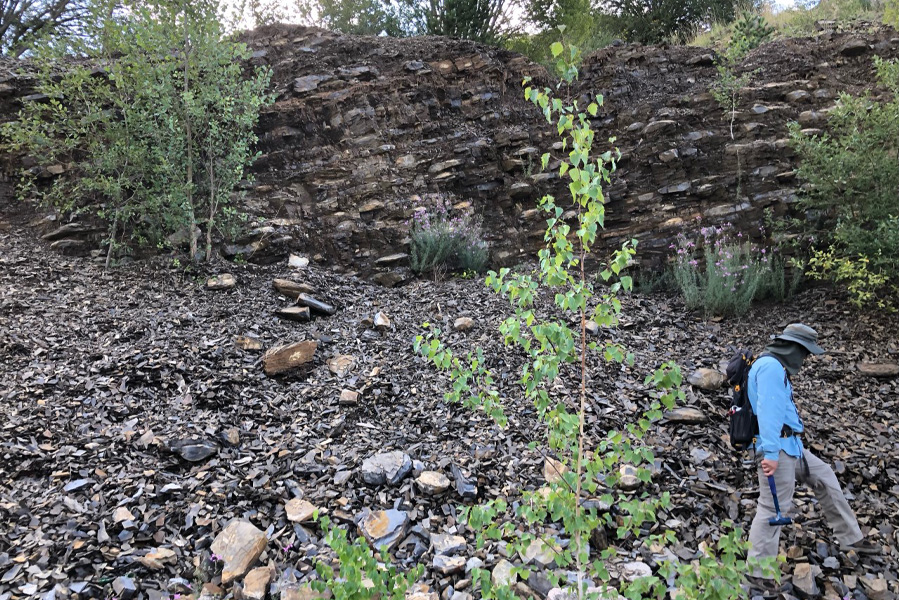 Nevin Kozik, a former FSU doctoral student and now a visiting assistant professor at Occidental College, during fieldwork to investigate how rapid changes in marine oxygen levels may have played a significant role in driving Earth’s first mass extinction.

Newswise — Rapid changes in marine oxygen levels may have played a significant role in driving Earth’s first mass extinction, according to a new study led by Florida State University researchers.

About 443 million years ago, life on Earth was undergoing the Late Ordovician mass extinction, or LOME, which eliminated about 85% of marine species. Scientists have long studied this mass extinction and continue to investigate its possible causes, such as reduced habitat loss in a rapidly cooling world or persistent low-oxygen conditions in the oceans.

By measuring isotopes of the element thallium — which shows special sensitivity to changes in oxygen in the ancient marine environment — the research team found that previously documented patterns of this mass extinction coincided with an initial rapid decrease in marine oxygen levels followed by a rapid increase in oxygen. Their work is published online in the journal Science Advances.

“Paleontologists have noted that there were several groups of organisms, such as graptolites and brachiopods, that started to decline very early in this mass extinction interval, but we didn’t really have any good evidence of an environmental or climate signature to tie that early decline of these groups to a particular mechanism,” said co-author Seth Young, an associate professor in the Department of Earth, Ocean and Atmospheric Science. “This paper can directly link that early phase of extinction to changes in oxygen. We see a marked change in thallium isotopes at the same time these organisms start their steady decline into the main phase of the mass extinction event.”

That decrease in oxygen was immediately followed by an increase. This rapid shift in oxygen coincided with the traditional first die-off of mass extinction and major ice sheet growth over the ancient South Pole.

“Turbulence in oxygen levels in oceanic waters is really what seems to have been pretty problematic for organisms that were living in the Late Ordovician at that time, which might have been adapted to cope with low oxygen conditions initially or vice versa,” Young said. “The fact that oxygen levels in the oceans next to the continents switching back and forth over short geologic time scales (a few hundred thousand years) really did seem to play havoc with these marine ecosystems.”

The Late Ordovician extinction was one of five major mass extinctions in Earth’s history and the only one scientists are confident took place in what are called “icehouse” conditions, in which widespread ice sheets are present on Earth’s surface. Earth is currently experiencing icehouse conditions and loss of biodiversity, which makes this ancient mass extinction an important analog for present-day conditions, along with trying to understand Earth’s future as our climate continues to warm and ice sheets recede.

Previous research into environmental conditions surrounding the LOME used evidence found in limestones from more oxygenated settings, but this study used shales that were deposited in deeper, oxygen-poor water, which record different geochemical signatures, allowing the researchers to make conclusions about global marine conditions, rather than for local conditions.

“The discovery of the initial expansion of low-oxygen conditions on a global level and the coincidence with the early phases of decline in marine animals helps paint a clearer picture of what was happening with this extinction event,” said lead author Nevin Kozik, a visiting assistant professor at Occidental College and former FSU doctoral student.

Co-authors on this paper were doctoral student Sean Newby and associate professor Jeremy Owens of FSU; former FSU postdoctoral scholar and current assistant professor at the College of Charleston Theodore Them; Mu Liu and Daizhao Chen of the Chinese Academy of Sciences; Emma Hammarlund of Lund University; and David Bond of the University of Hull.

This research was supported by the National Science Foundation, the American Chemical Society, the Sloan Research Foundation and the Geological Society of America.