Getting Fat to ‘Talk’ Again Could Lower Blood Glucose and Weight 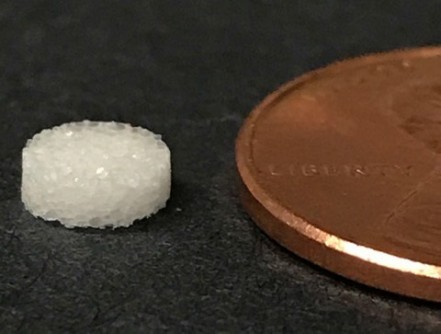 A spongy implant (left) in fat tissue of mice reduced their weight gain and blood-sugar levels after being on high-fat diets compared to controls.

A press conference on this topic will be held Tuesday, Aug. 22, at 1:30 p.m. Eastern time in the Walter E. Washington Convention Center. Reporters may check-in at the press center, Room 154A, or watch live on YouTube http://bit.ly/ACSLive_DC. To ask questions online, sign in with a Google account.

Newswise — WASHINGTON, Aug. 22, 2017 — Diabetes is a tough disease to manage. Oral medications, insulin shots, close monitoring of blood sugar, dietary changes and exercise can all factor into a person’s treatment regimen. Now researchers are exploring a novel, simpler approach: implanting a polymer sponge into fat tissue. Their study has shown that in obese mice with symptoms resembling Type 2 diabetes, the implant reduced weight gain and blood-sugar levels — by getting the fat to “talk” again.

The researchers are presenting their results today at the 254th National Meeting & Exposition of the American Chemical Society (ACS). ACS, the world’s largest scientific society, is holding the meeting here through Thursday. It features nearly 9,400 presentations on a wide range of science topics.

“We’re approaching diabetes as tissue engineers,” Michael Gower, Ph.D., says. “When people eat poorly, don’t exercise and are under a lot of stress, they gain weight. When fat stores get too large, communication with other parts of the body breaks down and can lead to diabetes. What we’re trying to do is restart that conversation.”

Several years ago, endocrinologists and others had discovered that fat is an endocrine organ, contrary to the long-held belief that it’s just a passive energy reservoir in the body. It releases compounds that regulate energy and metabolism, and it helps other organs respond to insulin and glucose.

In diabetes, major organs and tissues such as the brain, liver and skeletal muscles, which require high levels of glucose to function properly, lose their ability to take up the sugar molecule from the bloodstream and use it as energy. As a result, glucose builds up in the blood and can lead to hyperglycemia, which is toxic to many organs and tissues.

Gower’s lab at the University of South Carolina (USC), in collaboration with muscle physiologists and endocrinologists also at USC, wanted to reinstate the broken-down communication from fat to other organs and tissues. In his postdoctoral work at Northwestern University, Gower used similar sponges of poly(lactide-co-glycolide), or PLG, to deliver pancreatic islets into fat pads of mice as a Type 1 diabetes therapy. Now an assistant professor at USC, he wanted to see what effect the material alone was having on fat.

Michael Hendley, a doctoral student in Gower’s USC lab, implanted PLG sponges in large abdominal fat pads in obese mice that had developed symptoms resembling those of Type 2 diabetes. Within one week, the mice’s fat cells, immune cells and blood vessels filled the pores of the implant. After three weeks of a high-fat diet, mice with the sponges had a 10 percent increase in body fat, whereas the mice without the implant gained 30 percent more body fat. In their calf muscles, treated mice had 60 percent higher levels of a protein known to help shuttle glucose from the bloodstream into muscle cells as compared to untreated mice, and they had lower blood sugar levels than the control animals.

The treated mice didn’t show any signs of negative side effects from the material. The polymer used to make the sponge is already used in stents, sutures and other implantable devices.

Now, the researchers are trying to pinpoint why the PLG sponge reduces fat and lowers blood glucose levels, so they can tune the approach further and make it more effective. They are also infusing the sponge with bioactive molecules to see if they can enhance its activity. In a related study, also being presented at the meeting, the lab has found that encapsulating resveratrol — of red wine fame — enhances the effects of the PLG sponge.

Gower says, “I think what’s really exciting about this work and its implications is that we’re looking at how implanting this biomaterial in fat tissue, which has the ability to communicate with other organs, is affecting the whole body.”

The authors acknowledge funding from USC and the COBRE Center for Dietary Supplements and Inflammation (P20 GM103641), which is supported by the National Institutes of Health.

Despite current treatments, the number of people diagnosed with type 2 diabetes continues to rise, demonstrating a need for new therapeutic strategies. The most common treatment is oral administration of anti-diabetic drugs; however, this approach suffers from off target effects, poor bioavailability, and patient compliance. To address these issues we have developed biodegradable polymeric scaffolds for implant into the adipose tissue, a common target of anti-diabetic drugs. We fabricated scaffolds by gas foaming poly(lactide-co-glycolide) (PLG) particles made using a single emulsion technique. Scaffolds integrate  with the epididymal adipose tissue of C57BL/6 mice within seven days after implant and histological analysis indicates the polymer matrix is in contact with adipocytes . Interestingly, scaffold implant reduces fat gain and glucose intolerance caused by a 60% fat diet as measured by dual-energy x-ray absorptiometry and an intraperitoneal glucose tolerance test (IPGTT), respectively. To address how scaffolds are working, we collected gastrocnemius muscle fourteen days after scaffold implant into the adipose tissue (twenty-one days after beginning the 60% fat diet). Western blot analysis indicated that glucose transporter type 4 (GLUT-4) was elevated in the muscle  of mice receiving scaffold implants compared to controls, which was consistent with the enhanced glucose clearance from the blood stream measured during the IPGTT. Currently, we are investigating gene expression at the implant site to address how scaffolds implanted into the adipose tissue are increasing GLUT4 expression in the skeletal muscle. Collectively, we expect this work to impact our understanding of how biomaterial implant modulates adipose tissue function and aid in the development of new treatments for diabetes, the most common metabolic disorder in the United States.

Biodegradable microparticles for the delivery of exercise mimetics to adipose tissue

Many drugs that show promise for metabolic diseases, such as obesity or diabetes, suffer from off-target effects and low bioavailability. Furthermore, efficacy may be decreased if the patient is unable or unwilling to follow the prescribed administration schedule. This presentation will focus on the development of a biodegradable microparticle delivery system for sustained, localized release of resveratrol to the adipose tissue. Resveratrol is a polyphenol with exercise mimetic properties that promote anti-inflammatory and anti-oxidant gene expression; however, the molecule is quickly metabolized in the blood and liver making it difficult to achieve therapeutic concentrations within adipose tissues. The microparticle delivery system was fabricated using a single emulsion/solvent evaporation technique to encapsulate resveratrol into poly(lactide-co-glycolide) (PLG), an FDA approved biodegradable polymer. We maximized drug encapsulation by varying the solvent, surfactant, homogenization speed, vessel geometry and resveratrol concentration in the organic phase. We then determined the effect of microparticle drug loading, size distribution, and morphology on the resveratrol release profile using UV-Vis spectroscopy, laser light scattering, and electron microscopy. To investigate the efficacy of drug delivery, we compared the effect of free resveratrol versus microparticles on gene expression, lipolysis rates and glucose uptake in 3T3-L1 adipocytes. Future work will address the translational potential of this system by injecting microparticles into the inguinal and subscapular adipose tissues of diabetic mice. Collectively, we expect these studies to establish the efficacy of a polymeric drug delivery system to modulate adipose tissue function and reverse diabetes in a preclinical mouse model.