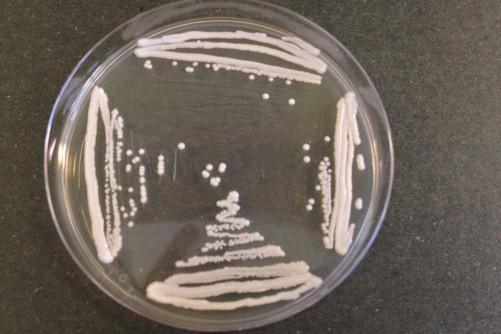 Alcohol-dependent patients at all stages of liver disease had dramatic overgrowths of one fungal type in particular — Candida (shown here growing in a petri dish).

Newswise — Liver cirrhosis is the 12th leading cause of mortality worldwide and approximately half of those deaths are due to alcohol abuse. Yet apart from alcohol abstinence, there are no specific treatments to reduce the severity of alcohol-associated liver disease. Researchers at University of California San Diego School of Medicine and J. Craig Venter Institute (JCVI) have linked intestinal fungi to increased risk of death for patients with alcohol-related liver disease. They also found that antifungal treatment protects mice from alcohol-related liver disease progression.

The study is published May 22 in the Journal of Clinical Investigation.

“Not only is this the first study to associate fungi and liver disease,” said senior author Bernd Schnabl, MD, associate professor of gastroenterology at UC San Diego School of Medicine, “we might be able to to slow the progression of alcoholic liver disease by manipulating the balance of fungal species living in a patient’s intestine.”

Alcoholism is associated with bacterial overgrowth in the intestines, as well as a shift in the types of bacteria found there, but little was known about the role of intestinal fungi in alcoholic liver disease.

In this study, Schnabl and colleagues found that fungi flourished in the intestines of mice with chronic alcohol exposure. In turn, they noted, the fungal overgrowth exacerbated liver disease. Parts of the fungal cell wall, mainly a sugar called beta-glucan, moved through the mouse’s intestinal wall into the surrounding body cavity and organs. Once relocated inside the liver, beta-glucan bound certain immune cells and triggered inflammation. Chronic inflammation kills liver cells and ultimately promotes alcoholic liver disease.

But the researchers were able to protect mice from alcohol-induced liver disease by treating them with the antifungal compound amphotericin B. Compared to untreated mice, mice with alcohol-related liver disease that received amphotericin B had lower levels of liver injury and fat accumulation. These outcomes were determined by measuring plasma levels of a liver enzyme called alanine aminotransferase (reduced by approximately 55 percent) and levels of liver triglycerides (reduced by approximately 21 percent).

“This work demonstrates that alcoholic liver disease is exacerbated not only by bacteria, but also by fungi. Therefore, therapeutic strategies that target both need to be translated into clinical practice,” said co-author Derrick Fouts, PhD, professor of genomic medicine at JCVI. “This study suggests a greater role of fungi in modulating the human microbiome than previously appreciated.”

The team also compared fungi in the stool of eight healthy people and 20 people with chronic alcohol abuse and various stages of liver disease. They found that the healthy people had a richer diversity of fungi living in their intestines, as compared to alcohol-dependent patients. Instead, alcohol-dependent patients at all stages of liver disease had dramatic overgrowths of one fungal type in particular — Candida, which includes the species that causes yeast infections.

In addition, Schnabl’s team found a correlation between fungi and disease severity in a separate group of 27 patients with alcohol-related liver disease: The higher the exposure to fungi, as measured by a person’s level of antibodies that recognize them, the higher the risk of death. Fourteen patients had high fungi levels and 13 were classified as low. After five years, 77 percent of the low-fungi group survived, compared to 36 percent of the high-fungi group.

Schnabl cautioned that this human study is just proof-of-concept in a relatively small number of patients. In addition, he said it might not be the changes in fungal populations that cause progression of alcoholic liver disease. Rather, it could be the overgrowth of intestinal fungi in combination with leaky intestinal walls — a known result of alcohol abuse — that trigger chronic inflammatory responses in the liver. Further studies are needed to determine if a single fungal species contributes to liver disease progression more than others.

“Since it was so effective in mice, we are interested in testing amphotericin B in patients with alcohol-related liver disease — a population in urgent need of new therapeutics,” Schnabl said.