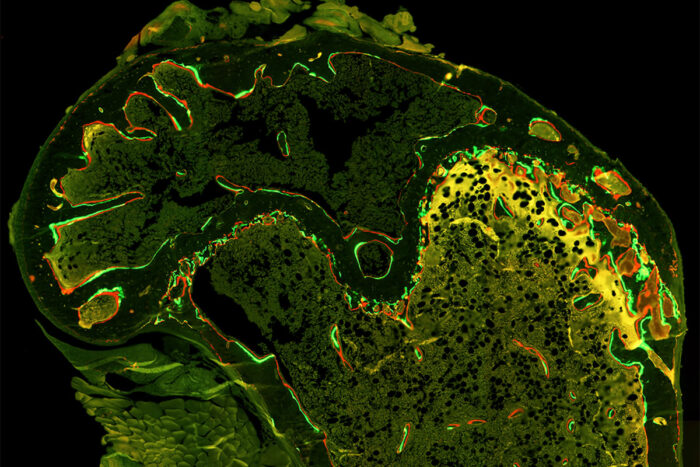 Red and green lines represent new bone in this image of a normal mouse bone. Exposure to chemotherapy and radiation during cancer treatment leads to bone loss and increases the risk of osteoporosis and fractures. A new study from Washington University School of Medicine in St. Louis identifies the trigger for this bone loss and suggests ways to prevent it.

Newswise — Bone loss that can lead to osteoporosis and fractures is a major problem for cancer patients who receive chemotherapy and radiation. Since the hormone estrogen plays an important role in maintaining bone health, bone loss is especially pronounced among postmenopausal women with breast cancer who are treated using therapies aimed at eliminating estrogen.

Men and children treated for other cancers also experience bone loss, suggesting that eliminating estrogen is not the only trigger leading to bone degeneration.

Studying mice, researchers from Washington University School of Medicine in St. Louis have found a driver of bone loss related to cancer treatment. They have shown that radiation and chemotherapy can halt cell division in bone, which results in a stress response referred to as senescence. According to the new study, cell senescence drives bone loss in female mice beyond that seen from the absence of estrogen alone. The researchers further found that this process occurs in males and females and is independent of cancer type. And perhaps most importantly, the researchers showed that such bone loss can be stopped by treating the mice with either of two investigational drugs already being evaluated in clinical trials.

“Researchers have understood that this bone loss has to be due to more than just hormone loss,” said senior author Sheila A. Stewart, PhD, a professor of cell biology & physiology. “Cancer patients who receive chemotherapy and radiation lose a lot more bone than women with breast cancer treated with aromatase inhibitors, which eliminate estrogen. And children who have not yet gone through puberty, and aren’t making much estrogen, also lose bone. We wanted to understand what causes bone loss beyond a lack of estrogen and whether we can do anything to stop it.”

Stopping bone loss could improve quality of life for cancer patients. Bone loss leads to an increased risk of fractures that continues many years after treatment. This loss of bone density makes it much more likely that patients will develop fractures in the pelvis, hips and spine, which affect mobility and increase the risk of death.

The researchers studied bone loss in mice treated with two common chemotherapy drugs — doxorubicin and paclitaxel — as well as in mice that received radiation to one limb, to understand whether the bone loss effects were similar in different types of cancer therapies. In all situations, the treatments induced the process of cellular senescence.

“Senescence is a chronic stress response in a cell that stops it from dividing and also results in the release of many molecules, some of which we showed drive bone loss,” said Stewart, who is also the associate director for basic sciences at Siteman Cancer Center at Barnes-Jewish Hospital and Washington University School of Medicine.

The cells in mouse bones that were most affected by the cancer therapies included those responsible for bone remodeling. These are sets of cells that strike a vital balance between dismantling old bone and building new bone in its place. This balance is disturbed in conditions such as osteoporosis, in which the bone-building cells can no longer keep up with the bone-dismantling cells. The new study suggests that the balance is even more off-kilter following cancer therapy: Bone-building cell activity slows down, and the activity of cells that remove old bone actually accelerates.

The researchers showed they could prevent bone loss in the mice if they took steps to remove the cells that are no longer dividing, thus eliminating the molecular signals that the cells produce that drive bone loss. Toward possible therapies, Stewart and her colleagues then showed they could achieve a similar effect with two different types of compounds that block these molecular signals.

The investigational drugs, a p38MAPK inhibitor and a MK2 inhibitor, block different parts of the same pathway leading to bone loss. Stewart and her colleagues also published a study in 2018 showing that the two inhibitors slowed the growth of metastatic breast cancer in mice. The p38MAPK inhibitor is being tested in U.S. clinical trials for inflammatory diseases, such as chronic obstructive pulmonary disease (COPD). And the MK2 inhibitor is about to be evaluated as a therapy for rheumatoid arthritis.

Cancer patients at risk of bone loss often are treated with drugs for osteoporosis, including bisphosphonates and denosumab. Both have some undesirable side effects, such as muscle and bone pain and, because of the way they work, they may be less desirable for children whose bones are still growing.

“The inhibitors we studied have extremely low toxicity, so we are interested in exploring whether they could be an improved option to stop bone loss in children receiving cancer therapy,” Stewart said. “We’re also interested in pursuing a clinical trial to evaluate these drugs in women with metastatic breast cancer to see if we can slow metastatic growth and also preserve bone health in these patients.”