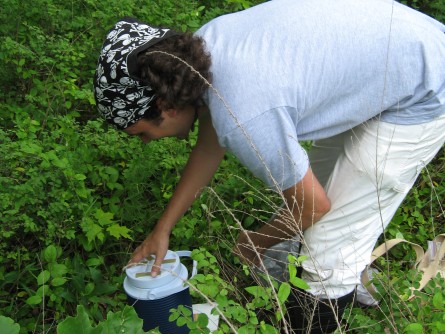 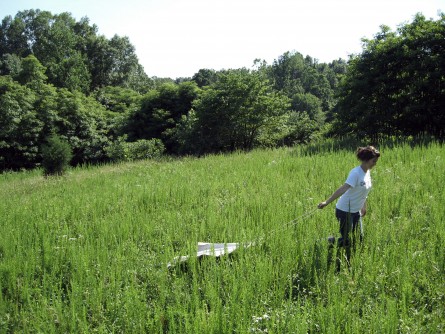 Field assistant Alisha Shake drags a cloth across the ground to collect ticks. 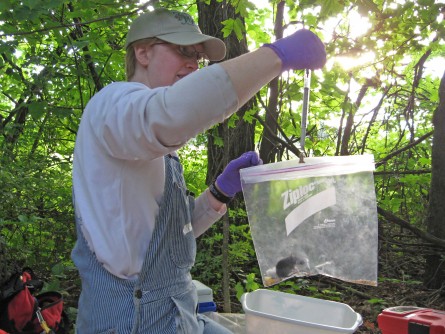 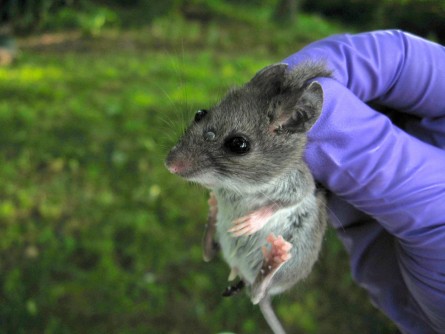 A white-footed mouse with a tick on its nose prior to removal.

Newswise — BLOOMINGTON, Ind. -- Over nearly 15 years spent studying ticks, Indiana University's Keith Clay has found southern Indiana to be an oasis free from Lyme disease, the condition most associated with these arachnids that are the second most common parasitic disease vector on Earth.

He has also seen signs that this low-risk environment is changing, both in Indiana and in other regions of the U.S.

A Distinguished Professor in the IU Bloomington College of Arts and Sciences' Department of Biology, Clay has received support for his research on ticks from over $2.7 million in grants from the National Science Foundation-National Institutes of Health's Ecology and Evolution of Infectious Diseases Program and others.

Clay's lab has found relatively few pathogens in southern Indiana ticks that cause common tick-borne diseases compared to the Northeast and states like Wisconsin and Minnesota.

But Lyme disease has been detected just a few hours north of the region around Tippecanoe River State Park and Lake Michigan’s Indiana Dunes, and Clay said the signs are there that new tick species, and possibly the pathogens they carry, are entering the area.

"Just in the past 10 years, we're seeing things shift considerably," Clay said. "You used to never see lone star ticks in Indiana; now they're very common. In 10 years, we’re likely to see the Gulf Coast tick here, too. There are several theories for why this is happening, but the big one is climate change."

A vector for disease

The conclusions are drawn from years of work spent mapping tick boundaries and disease risks, but the exact cause of the shifting borders is not clear. In addition to changing temperatures, Clay references changes in animal populations, including deer, which provide large, mobile hosts for the parasites.

Defining these boundaries is critical due to ticks' status as the most important vector for infectious disease in the U.S. In addition to Lyme disease, ticks are responsible for Rocky Mountain spotted fever, southern tick-associated rash illness and a number of other serious diseases. Other conditions, such as mammalian meat allergy, caused by lone star tick bites, are caused by an immune response to proteins in tick saliva. Mammalian meat allergy sufferers experience serious allergic reaction to consuming meat and sometimes other products from mammals.

"Ticks play the same role in temperate climates that mosquitoes play in the tropics," Clay said. "Fortunately for us, ticks can't fly ... although they can catch a ride on birds."

But the similarities between ticks and mosquitos, which are the No. 1 vector in the world for parasitic diseases, aren't limited to their both causing disease by transmitting pathogens when they latch on to their host to feed on blood. They are also linked by how the relationship between parasites and other less harmful microorganisms in their systems might be exploited to protect humans against future infection.

In a paper published in the May issue of the journal Molecular Ecology, Evelyn Rynkiewicz, a former IU doctoral student in Clay's lab and current postdoctoral research fellow at the University of Edinburgh, cataloged the microbiome of two major tick species in southern Indiana -- dog ticks and black-legged deer ticks -- and of the blood of white-footed mice, the host animal from which the ticks were collected.

A microbiome is the unique microbial community that resides inside a living organism, and by using high-throughput gene sequencing, researchers can identify all the bacteria that comprise the microbiome of a species. Rynkiewicz's study identified all the major pathogens and symbionts (microorganisms not known to cause disease) residing in the tick's body.

"Understanding the tick's microbiome is really laying the foundation for future research," Rynkiewicz said. "There are groups working right now on introducing symbionts into mosquitoes' microbiome to block or reduce the number of pathogens in their systems that affect humans. One day we may be able to do the same with ticks."

Another example is the attempt to prevent Chagas disease -- a life-threatening tropical illness affecting millions worldwide -- by genetically modifying a gut symbiont in their insect vector, the “kissing bug,” that suppresses the effect of the parasite that causes the disease.

The naturally occurring proximity of harmful pathogens and harmless symbionts in a tick's system could also give rise to new dangers for humans, so it is important to understand the full gamut of microorganisms in their systems.

"Whenever you're introducing a new microorganism into a new system, such as a human, you've got the potential to create new pathogens, even when they're previously considered harmless, depending on adaptability."

Clay also said better tools are needed to diagnose tick-borne diseases in humans, since the ones doctors use now are poor compared to analyses performed in biology labs.

"The medical field doesn't really have a great handle on tick-borne diseases in some ways because the diagnostic tests aren't very accurate," he said. "The lone star tick, for example, carries a pathogen that's closely related to Lyme disease. It's not Lyme disease, but there's a good chance our current tests will turn up positive for it."

He said these sorts of diagnostic errors are likely responsible for most Lyme disease cases reported in southern Indiana, as his lab's research has found no evidence of Borellia burgdorferi, the bacterial species responsible for the disease, in ticks captured in their studies.

To conduct research, IU scientists venture into the natural environment because ticks are difficult to maintain in the lab.

To capture ticks, members of Clay's lab use one of three techniques: "tick drags," small mammal catch and release, and carbon dioxide trapping.

The first technique involves dragging a large sheet of white fabric along the ground, tricking the tick into grasping the sheet when it thinks an animal is walking by. White sheets are preferred because dark-colored ticks show up easily against the material.

Another method that was used for Rynkiewicz's study involved humanely capturing small animals, such as mice, on which ticks commonly feed. The ticks are collected from the host animals, which are then tagged and released. Over the course of several weeks, scientists will commonly collect multiple ticks from the same animal, with as many as 40 to 50 ticks coming from a single mouse. Tick collections for Rynkiewicz's study took place in two locations within 10 miles of Bloomington, Ind.

A third method, carbon dioxide trapping, involves placing dry ice where ticks are common. Ticks use their sensitivity to CO2 to detect host animals, so they flock to dry ice, where scientists then collect them.

April and May are typically the worst months for lone star and dog ticks, while black-legged deer ticks are more common in the fall. Clay and his colleagues take every possible precaution to protect themselves from bites. That includes wearing knee-high rubber boots, tucking pant legs into socks, wearing light-colored clothing and using insecticidal sprays. Ticks don’t jump, so they normally first attach to a person’s legs and can then can crawl to other parts of the body.

The IU scientists also advise against wading unprotected into areas where ticks are common, such as grassy, brushy areas or open woodlands. Hikers can avoid exposure by sticking to the center of the trail where grass and other vegetation aren't present. Gardeners typically aren't at risk unless they're working in more rural, scrubby areas.

Individuals walking in the woods with dogs should exercise particular caution, Clay added, as pets tend to pull owners off the beaten path and ticks are harder to see in pets' fur. Both dogs and cats should also be treated for ticks.

If a person does find a tick on their body, they should remove it immediately. Clay recommends using a "tick nipper" from a local outdoor store, or regular tweezers, using a firm grasp at the point where the tick's mouthparts are embedded in the skin. To remove the tick, pull directly upward perpendicular to the skin with a slow steady force until the tick pulls free, then clean the spot with alcohol and apply antibiotic cream. Don't grasp too tightly as you want to avoid squashing the tick before it's removed.

The most important rule in tick safety, he said, is vigilance. Always check the backs of legs and other areas you can't easily see, and never get into a car without checking for ticks.

"Fortunately, it takes a while for ticks to transmit pathogens," Rynkiewicz added. "They stay attached a few days, but if you get them off right away, your chances of picking something up are very low."

Additional co-authors on Rynkiewicz's study were Chris Hemmerich and Douglas B. Rusch of the IU Center for Genomics and Bioinformatics, and Clay Fuqua, chair of the IU Bloomington Department of Biology. Additional contributors to tick research at IU include Fuqua, Curt Lively and Mike Wade, also in the Department of Biology; Frank Yang of the IU School of Medicine; and Bob Pinger of Ball State University. Support for the work has come from the NSF/NIH Ecology and Evolution of Infectious Diseases Program, the Indiana 21st Century Fund, the IU METACyt Program and the IU Collaborative Research Grants Program.

Rynkiewicz’s research has received support from an NSF Doctoral Dissertation Improvement Grant and is currently supported by an NSF Postdoctoral Fellowship in Biology.