Parasites Suck It Up

Malaria parasites must absorb a fatty molecule, shown in green, from the blood in order to replicate in human hosts. 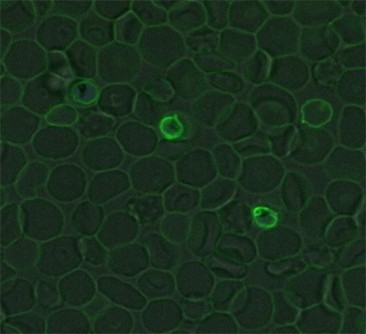 Malaria parasites must absorb a fatty molecule, shown in green, from the blood in order to replicate in human hosts.

Newswise — Depletion of a fatty molecule in human blood propels malaria parasites to stop replicating and causing illness in people and instead to jump ship to mosquitoes to continue the transmission cycle, according to a new study by an international research team.

The discovery, published online in Cell Nov. 9, answers a longstanding question about what controls this critical step in the life cycle of Plasmodium falciparum, the parasite responsible for about half a million malaria deaths worldwide each year. It could also open doors to new strategies for malaria control and treatment.

The key molecule the researchers identified has the catchy name of lysophosphatidylcholine, or LPC for short. It appears to be a building block the parasites use to construct new cell membranes when they divide, the team found.

“When LPC is plentiful, the parasites happily reproduce in humans,” said J.P. Gerdt, a research fellow in the lab of Jon Clardy at Harvard Medical School and co-first author of the study. “When LPC drops, the parasites can’t multiply anymore and commit to a different pathway.”

“This is a first big step in dissecting the details of what’s going on,” added Gerdt.

The purpose of the research was to illuminate the biochemical motivators in Plasmodium’s decision making. Although important, the findings won’t immediately translate into new therapies, cautioned Clardy, the Hsien Wu and Daisy Yen Wu Professor of Biological Chemistry and Molecular Pharmacology at HMS and co-corresponding author of the study.

“Treating patients with antimalarial drugs usually kills the replicating parasites, but if you don’t also block transmission, the disease will never disappear from the population,” said co-corresponding author Matthias Marti, adjunct professor of immunology and infectious diseases at the Harvard T.H. Chan School of Public Health and professor at the Wellcome Centre for Molecular Parasitology at the University of Glasgow.

They pass into humans through the bite of an infected Anopheles mosquito, congregating first in the liver and later in red blood cells, where they multiply and burst forth in cycles that cause waves of illness.

Eventually, if the host is lucky enough to survive, some of the parasites stop multiplying and follow a different path known as sexual commitment or differentiation. In what Gerdt likens to a parasitic puberty, they morph from asexual into sexual creatures.

If mosquitoes bite an infected person during this phase, the parasites—now male and female—travel back into the insects and breed. The transmission cycle begins anew.

“Almost everything we try to do to treat malaria is at the blood stage, because that’s when you know people have it,” said Clardy. “Researchers are putting more effort lately into studying the transmission stage in light of campaigns to eliminate malaria.”

Even though sexual commitment is a linchpin in malaria dynamics, scientists didn’t know much about what prompts it. Three years ago, Marti, then an associate professor at the Harvard Chan School, and study co-first author Nicolas Brancucci, then a postdoctoral fellow in Marti’s lab, set out to discover whether any substances in human hosts—rather than in the parasites themselves—played a role.

To find out, they combined their expertise in parasitology with the Clardy lab’s specialty in tracing the source of molecular signals.

Something in the blood

When the researchers cultured Plasmodium cells in flasks without their usual bath of human blood serum, the parasites skipped replication and went straight for sexual commitment—hinting that a control switch lurked in the missing blood.

Next, the researchers grew Plasmodium with serum. As expected, after a while the parasites lost their zest for replicating and began to undergo sexual commitment. But when the team added fresh serum, the parasites went on replicating. They were indeed grabbing something from the serum.

The researchers decided to separate and study all the serum components to see if they could identify the molecule or molecules at play.

“Serum is so complex; no one would do a test like that,” Marti recalled. “But it actually worked. We found a single factor that’s necessary and sufficient for regulating sexual commitment.”

With each round of parasite replication, the researchers observed that LPC levels dropped. When LPC fell low enough, the parasites switched to sexual commitment.

Fluorescent microscopy revealed that Plasmodium cells were absorbing LPC from the bloodstream as they prepared to divide.

“The parasites suck it up,” said Gerdt.

The scientists believe that when the parasites sense that their raw materials are running low, they change strategies.

The researchers found similar patterns of LPC depletion in a mouse model of malaria. Their findings were further reinforced by blood serum data from previously published studies that showed LPC depletion is a hallmark of acute malaria infection in humans.

The study is the first to identify a factor in human hosts that Plasmodium uses as an environmental sensor.

“This was surprising at first, but once you know about it, it makes sense,” said Marti. “Plasmodium is a blood parasite, after all, and it travels through many different environments during its life cycle. It samples those environments, and in this case, it responds to reduced LPC levels in the blood during acute malaria infection by deciding to move into the mosquito.”

Moving from the study findings to a malaria therapy won’t be straightforward, said Clardy. For instance, doctors can’t simply deplete LPC to prevent the parasites from replicating, because LPC plays important roles in the body, including forming healthy cell membranes.

Nonetheless, now that they know “at least the first step and a few downstream steps” of how the parasite regulates transmission, Marti said he envisions new combination strategies that would safely block transmission while also treating the people who already have malaria.

Brancucci is now at the Swiss Tropical and Public Health Institute in Basel.