EMBARGOED BY THE PROCEEDINGS OF THE NATIONAL ACADEMY OF SCIENCES

Newswise — Satellite images, drone photos and even Google Earth could help identify communities most at risk for getting one of the world's worst tropical diseases.

A team led by the University of Washington and Stanford University has discovered clues in the environment that help identify transmission hotspots for schistosomiasis, a parasitic disease that is second only to malaria in its global health impact. The research, publishing the week of Oct. 28 in the Proceedings of the National Academy of Sciences, uses rigorous field sampling and aerial images to precisely map communities that are at greatest risk for schistosomiasis.

"This is a game-changer for developing-country public health agencies, because it will make it possible for them to efficiently find the villages that need their help the most," said lead author Chelsea Wood, an assistant professor in the UW School of Aquatic and Fishery Sciences.

More than 200 million people have schistosomiasis, which is treatable but has been difficult to eliminate from some regions of the world. Schistosomes, the worms that cause this disease, grow within freshwater snails, where they multiply and are released into the waters of rivers, lakes and streams. The worms infect people by penetrating their skin when they swim, bathe or wade. Schistosomiasis causes bloody urine and stool and abdominal pain, and can damage the liver, spleen, intestines, lungs and bladder. In children, the infection can stunt growth and impair cognitive development.

The disease is found across sub-Saharan Africa, as well as in South America, the Caribbean, the Middle East, and East and Southeast Asia. Though schistosomiasis is treatable with the drug praziquantel, it's easy for a person to become re-infected after treatment if they swim or bathe in freshwater where the parasite is present.

The World Health Organization recently recognized that efforts to slow transmission of the disease through drug distribution weren’t working in some regions. In addition to drug distribution, WHO now recommends targeting the types of snails that transmit the parasitic worms, which is how this research team got involved.

"The ecological side of the problem is what’s holding us back from schistosomiasis control and elimination — and now ecologists are stepping in and filling that gap," Wood said. "It’s an exciting time because there’s so much for us to learn. The kind of innovation we have introduced is just the beginning of what ecologists have to contribute to the control of schistosomiasis."

The researchers worked across more than 30 sites in northwestern Senegal, where villages use a local river and lake for everything from bathing and swimming to washing dishes and clothes. This location was the epicenter of the largest schistosomiasis outbreak ever recorded, in the mid-1980s.

The researchers first set out to methodically count and map the distribution of snails across each site over two years. The fieldwork was difficult and exhausting — they couldn’t let the schistosome-infested water touch their skin while they waded chest-deep to sample mud and plants. It was hot and humid, and the thick shoreline vegetation was full of mosquitoes, spiders, snakes — and even feral dogs.

Their fieldwork demonstrated that snails were found in the river in patchy and inconsistent distributions over time. Snails might be present in one location, then completely absent three months later. Given the snails' ephemeral nature, the researchers realized that targeting aggregations of snails for removal might not be an efficient way to reduce schistosomiasis transmission.

Instead, they shifted their focus to the habitat where snails live. The snails thrive in unrooted, floating vegetation that is visible in images from satellites and drones.

Considering these habitat features, plus other data they had gathered about each site such as snail density, village size and location, they used models to evaluate which factors could best predict schistosomiasis transmission. The total area of a water access point and the area of floating vegetation were the two best indicators that human infection would occur nearby.

These habitat features are all easy to measure in drone or satellite imagery.

"Counting snails is not an easy undertaking, and it also produces data that are not as useful as the data you can get from a drone," Wood said. "Once we understand the association between snail presence and particular habitat features, we can use drone and satellite imagery to detect those habitat features. This cuts the time needed to evaluate the risk of schistosomiasis infection down to a fraction of what it would be if you were just looking at snails."

Public health agencies in Senegal can now look at aerial images across their jurisdiction, find areas with the most floating vegetation in water access points and target those villages for schistosomiasis treatment, the researchers explained.

"Now we can take these aerial images season to season and have an idea of how the pathogenic landscape changes in time and space. This can give us a better idea of infection rates," said co-author Giulio De Leo, a biology professor at Stanford University. "This project has been a tremendous effort and an example of collaborative research that would be impossible by a single person or a single lab."

The team is also trying to use machine learning to automate the identification of floating vegetation in photos, making it even easier for agencies to use the information. They plan to test their approach in other parts of Africa at a broader scale, using publicly available infection data and satellite imagery.

"We’re cautiously optimistic, but we still have some work to do to generalize our findings to new contexts," said co-author Susanne Sokolow, a research scientist at Stanford University. "If, indeed, we find that the predictors for schistosomiasis are scalable and automatable, then we will have a powerful new tool in the fight against the disease, and one that fills a critical capacity gap: a way to efficiently target environmental interventions alongside human treatment to combat the disease."

Photos, video available for download: https://drive.google.com/drive/folders/1gJklJB3puC23LFcOcJBRp3Bf-e_pfVhi?usp=sharing (if link doesn't work, copy and paste into a browser) 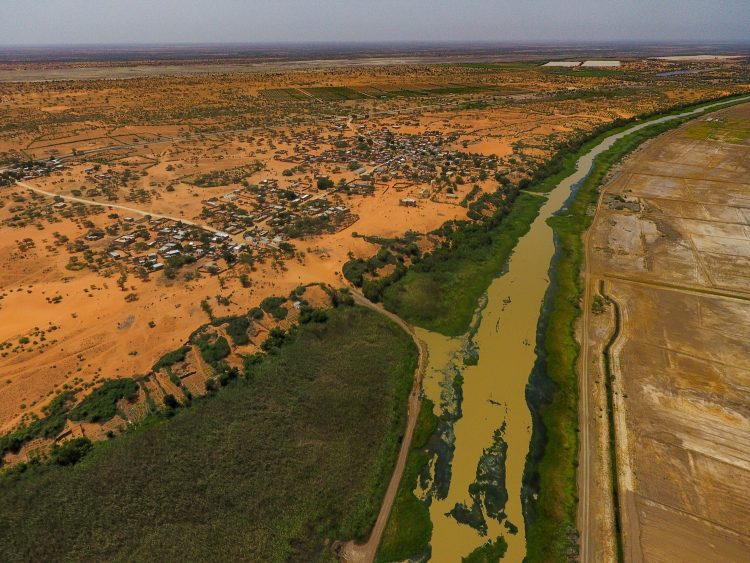 Caption: A drone image showing a village in northwestern Senegal and agricultural land, separated by a river with lush vegetation. Researchers use rigorous field sampling and aerial images to precisely map communities that are at greatest risk for schistosomiasis infection. 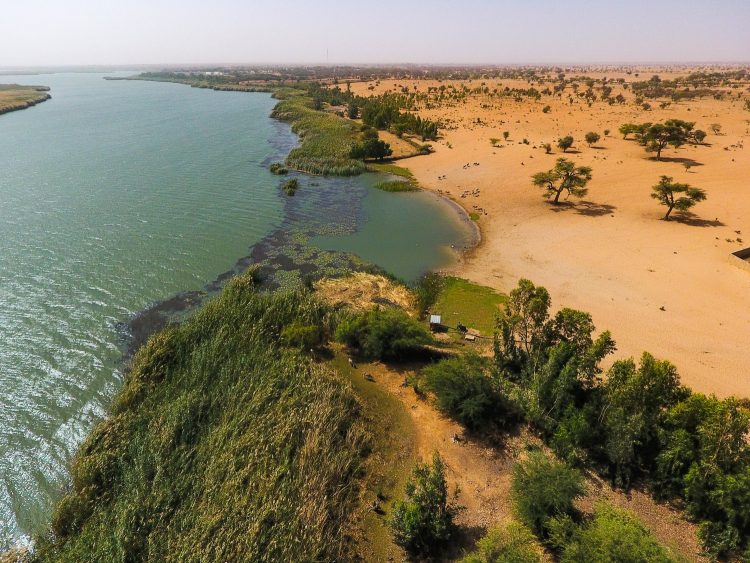 Caption: Freshwater snails that transmit schistosomiasis thrive in unrooted, floating vegetation that can be seen in aerial images. In this photo, the dark, patchy vegetation in the water is the ideal habitat for snails. 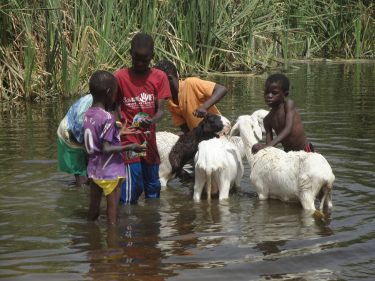 Caption: Children washing sheep in Penene, Senegal, May 2015. A village's river water access point is used for many purposes, including bathing, swimming, and washing dishes and clothes. 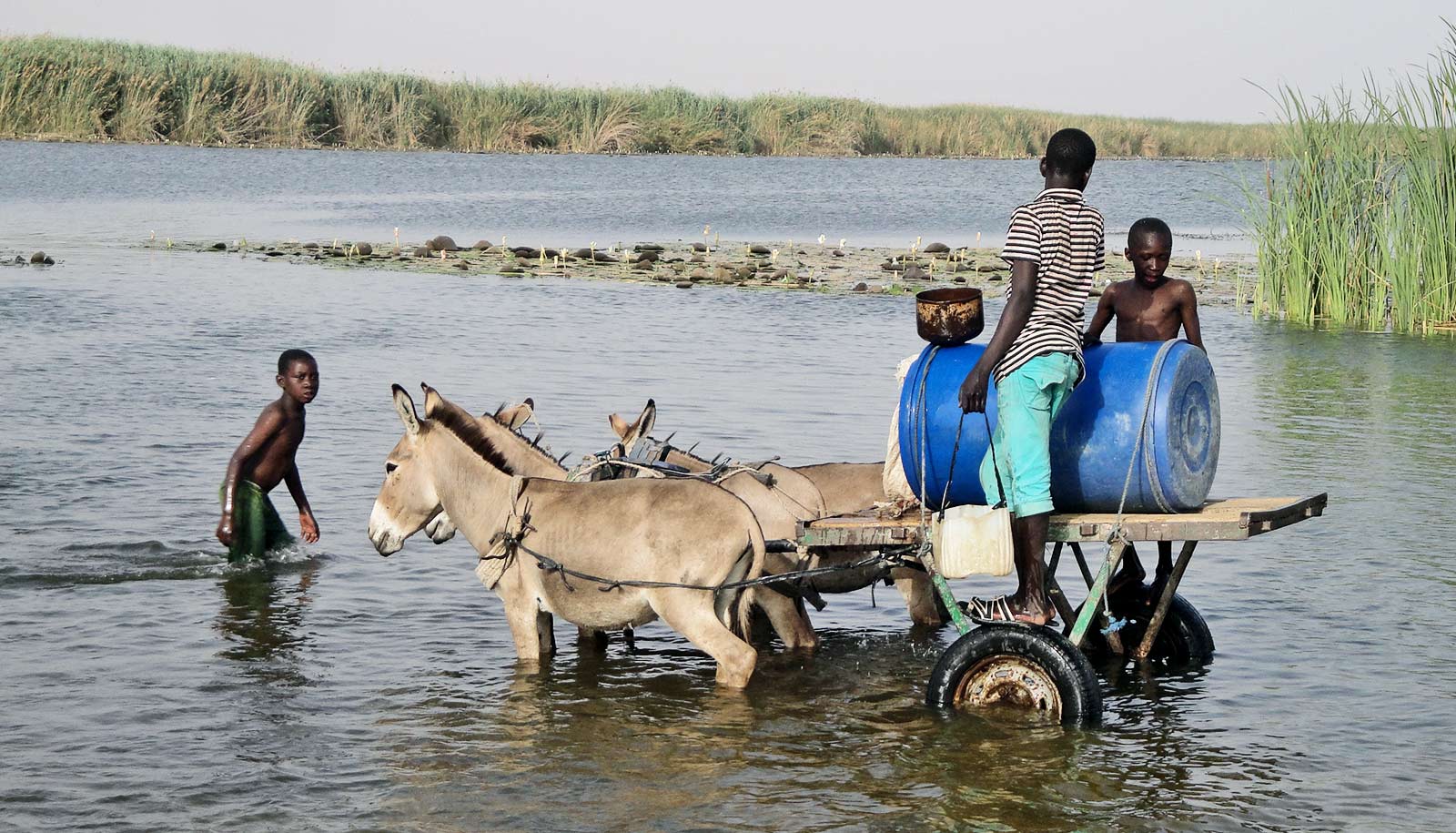 Caption: Collecting water in the village of Merina Gewel, Senegal, May 2015. 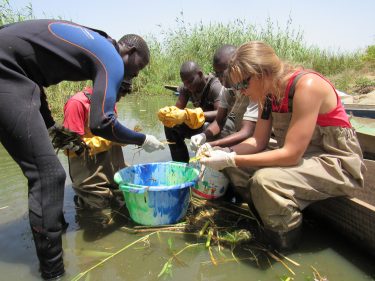 Caption: Researchers process the vegetation from a sampling point in northwestern Senegal, May 2016. 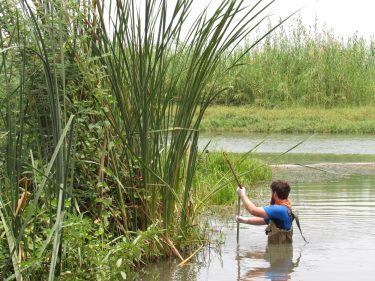 Caption: There are many uses for the water access point at Ndiawdoune, Senegal, including dishwashing, bathing, fishing and water for livestock.

Proceedings of the National Academy of Sciences, Oct-2019