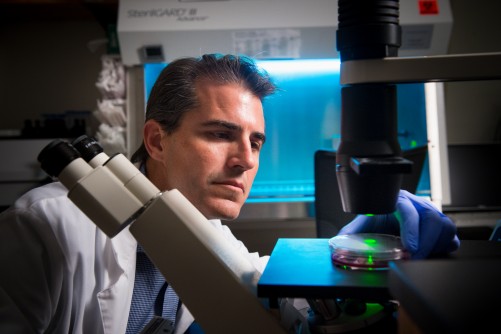 Newswise — A team from the St. Jude Children’s Research Hospital – Washington University Pediatric Cancer Genome Project (PCGP) has mapped the intricate changes in the “epigenetic” organization of the nucleus to determine how retinal cells transition from immature cells to mature retinal neurons. The researchers have also mapped the epigenome of retinoblastoma cells as they turn cancerous.

The data are an invaluable resource for discovering the still-unknown cellular origin of retinoblastoma—the most common eye cancer in children. Scientists can also explore the data for pathways that trigger adult retinal diseases like age-related macular degeneration and retinitis pigmentosa.

The researchers were led by Michael Dyer, Ph.D., a Howard Hughes Medical Institute Investigator and St. Jude Department of Developmental Neurobiology chair. The work appears in the May 3 issue of the journal Neuron.

Epigenetic controls are molecular switches that turn genes on or off to orchestrate a cell’s development from a generic cell to a specialized cell like a neuron. While the “genome” of thousands of individual genes is like data stored on a computer disk, the “epigenome” is like a computer program that controls how stored data are read.

Researchers know that epigenetic malfunctions can drive cancers and degenerative diseases, but they have not cracked the “epigenetic code”—the specific changes in the organization of the nucleus that guide each type of cell to differentiate from a progenitor cell to a specialized cell.

The researchers used tools of epigenomic analysis to trace the specific epigenetic switches controlling each of thousands of genes in both mouse and human retinal cells as the cells progressed through development.

Analyzing the data revealed surprises about the epigenetic processes of retinal neuron development, Dyer said. One such surprise was the relative importance of two types of epigenetic control switches for retinal development. One control is DNA methylation, which is a chemical alteration of a gene that switches it on or off. The other control switch is histone modification. Histones are proteins that serve as a scaffold for coiling up the DNA into the tight space of the nucleus.

“The perception of the research community was that DNA methylation was the major epigenetic controller,” Dyer said. “But to our surprise, only a small percentage of the changes in gene expression during development had any correlation with DNA methylation. It’s at the histone level that we saw the really profound changes during differentiation.”

Another unexpected discovery, Dyer said, was the point during development when the immature cells transition from making new tissue by dividing rapidly, to differentiating into a mature retinal neuron.

“It’s like flipping a giant switch,” Dyer said. “Early in development, all the cells are immature progenitors that are rapidly growing and dividing. Then, when those cells stop growing and start becoming neurons, there was a dramatic shift in the epigenome. “We thought cells would actively shut down those progenitor growth genes, because it would not want them to reactivate and lead to a tumor,” he said. “But instead, many of those genes just went from a very active state into what we call an ‘empty’ state. The cell didn’t make any particular effort to shut them down. On the flip side, those genes needed for differentiation, which were repressed in the progenitor cells, had their epigenetic repression removed.”

Mapping the epigenetic changes in developing retinoblastoma mouse and human cells yielded similar important insights,Dyer said. “We still don’t know which type of cell gives rise to retinoblastoma,” he said. “The tumor cells have a mixed program of progenitor cells and neurons. It appears as though they are stuck at the stage when the epigenetic switch is normally flipped to transition from progenitors to neurons.

“While this study can’t answer the origin question, it did narrow down the developmental window when the normal cell becomes a tumor cell,” he said. “I would have guessed that it would be very early, when a progenitor was rapidly dividing. But we found that the decision point was during a period when the cells were transitioning from rapid growth to differentiation. This insight will allow us to focus on that stage to better understand how retinoblastomas originate.”

Added Robert Fulton, director of technology development at Washington University’s McDonnell Genome Institute, which contributed to the sequencing and analysis of the data: “This research is a great example of the value of comprehensive genomic analyses and the insights that can be gained from thorough, well-designed studies. To really understand the origins of retinoblastoma, we need to look beyond genes to understand how epigenetic changes drive cancer.”

“There are some patients with retinal disease who don’t show gene mutations that we know are responsible for disease,” he said. “Instead, those people might have mutations in epigenetic controls called ‘enhancers.’ We’ve provided the first map of these enhancers in the retina, so researchers can discover such mutations.”

Dyer and his colleagues also mapped the three-dimensional organization of the retinal epigenome to discover how retinal cells package their genes in concentric regions of the cell nucleus. The organization makes some genes more available than others to be turned on and off.

“It’s like packing a suitcase for a trip,” he said. “You put the clothes you need in a suitcase to take with you; but those you don’t need, you leave in the closet. In our studies, we’re trying to decipher the functional significance of why the retinal cell packs some genes away and makes others more accessible.

“All our data will serve as a key resource for investigators exploring specific questions about retinal development and disease,” Dyer said. To make the data readily available to other researchers, he has uploaded it to ProteinPaint, a St. Jude web portal that gives scientists worldwide access to masses of cancer genomic data [Link to research highlight].

This work was supported in part by funding from Howard Hughes Medical Institute, the National Cancer Institute (CA21765), the National Institutes of Health (EY014867, EY018599 and CA168875), Alex’s Lemonade Stand Foundation for Childhood Cancer, the Tully Family Foundation, the Peterson Foundation and ALSAC, the fundraising and awareness organization of St. Jude.