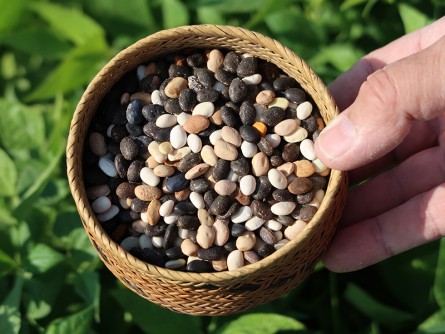 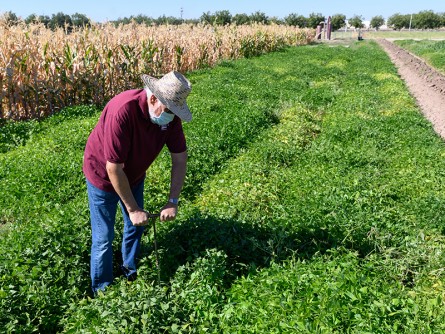 Richard Pratt uses a probe in the tepary bean research plots to obtain a soil sample. The samples will be sent to an analytical lab to measure levels of nutrients and microbes in the soil. 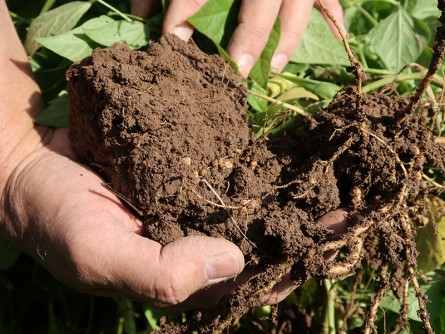 Tepary roots have been dug up to examine them for the presence of nodules. Nodules are the light-colored, spherical areas on the roots. They were formed by beneficial soil microbes that “set up shop” in the roots to get some sugars from the host plant while they fix atmospheric nitrogen, which plants need to grow.

Newswise — December 16, 2020 - Agriculture accounts for more than a third of water use in the United States. In drier parts of the country, like the southwestern U.S., that fraction can be much higher. For example, more than 75% of New Mexico’s water use is for agriculture.

Richard Pratt, a member of the Crop Science Society of America, studies native crops that can enhance food security while reducing water use. “Water sustainability and food security are tightly linked,” he explains.

One of the top candidates for enhancing food security with less water is the tepary bean. It is a native crop that has been cultivated for thousands of years.

“Tepary beans, or teparies, are basically an all-around champion of desert adaptation in an agricultural context,” says Pratt.

Teparies are relatively drought and heat tolerant. That is especially true when compared with their common bean cousins like pintos and kidney beans.

Since teparies need less water than many other bean crops, they can be one solution to dwindling water resources.

“We are facing growing water demand coupled with decreasing water supply and quality,” Pratt says. “This gap continues to widen, and the status quo is unsustainable.”

Native crops, like teparies, can shift the status quo in different ways. For example, one approach that could lead to using less water for farming is breeding more heat and drought tolerant crops. “That way we can get more ‘crop per drop’,” says Pratt.

Heirloom crop varieties from the Southwest, like teparies and their wild relatives, can be used as breeding resources.

“It takes time to do the breeding, but less thirsty crops grown more efficiently will help,” explains Pratt.

A more radical approach would be changing what crops are grown in arid parts of the U.S., such as the Southwest.

Farmers may consider shifting away from ‘thirsty’ crops, such as pecans, maize and common beans. In their place, farmers could grow crops like pistachios, sorghum and teparies.

But heirloom varieties of native crops can have lower yields than modern varieties. Also, investments in new processing facilities may be needed, and developing markets for new crops can take time.

“There is no free lunch,” says Pratt. “But on the brighter side, native crops may offer unique nutritional or quality traits that consumers are looking for.”

Teparies can also be an effective cover crop. These are crops planted for soil management purposes, such as reducing erosion or enhancing soil health and nutrients.

Leguminous cover crops, such as clovers or hairy vetch, have root nodules housing microbes. These microbes can ‘fix’ or add atmospheric nitrogen to the soil, increasing productivity.

Tepary beans also typically have root nodules but it was unclear if these nodules would be present when teparies are grown in the hot desert soils of the American Southwest.

“It was great to dig up tepary roots and see nodules that bring in ‘free’ nitrogen into the cropping system,” says Pratt. This finding shows that teparies can be a particularly effective cover crop.

“We now have confidence to go forward with teparies as a prospective forage and cover crop,” says Pratt.

Future work will focus on finding ways to improve teparies as a crop. For example, tepary bean pods can release the seeds before harvest. “That poses a risk for seed production,” says Pratt. “Further research is needed to reduce that problem.”

Ultimately, teparies can help improve food security and water management, expand the availability of high quality, locally produced food, and retain agriculture as a part of a vibrant economy.