24-Oct-2017 9:05 AM EDT, by National Institute of Biomedical Imaging and Bioengineering
favorite_border

Newswise — Researchers funded by the National Institute of Biomedical Imaging and Bioengineering combined the immune response created by injection of potato virus nanoparticles with the chemotherapy drug doxorubicin to halt melanoma progression in a mouse model. The research is the first demonstration of an immune system anti-tumor response using potato virus nanoparticle vaccination—a novel treatment that was further enhanced when combined with doxorubicin chemotherapy.

For decades, researchers have used vaccination of tumors with foreign substances such as bacterial extracts and viruses to evoke an anti-tumor immune response in human participants and experimental animal models. Promising results have prompted studies aimed at optimizing and enhancing anti-tumor effects using vaccination with antigens from a variety of sources as well as combinations of vaccination and chemotherapy treatments.

In experiments reported in the July 2017 issue of the journal NANO Letters, researchers from Case Western Reserve University in Cleveland used a mouse melanoma model to test the anti-tumor immune response generated by nanoparticles derived from potato virus X (PVX). The group was also investigating approaches to enhancing the ant-tumor effects by combining PVX vaccination with traditional chemotherapy.

“This work would not be possible without the combination of engineers and medical doctors,” said Richard Baird, Ph.D., Acting Director, Division of Discovery Science and Technology, National Institute of Biomedical Imaging and Bioengineering. “The combined expertise of engineers continually improving nanoparticle-based vaccines and oncologists with detailed knowledge of chemotherapeutic agents gives us the best chance of developing smart combinations with optimal results.”

The work was done by team leader Nicole F. Steinmetz, Ph.D., the George J. Picha Designated Professor in Biomaterials and Director of the Center for Bio-Nanotechnology, and her associates at Case Western Reserve University, Cleveland, Ohio. Additional expertise was provided by researchers at the Geisel School of Medicine at Dartmouth, Hanover, New Hampshire; the Norris Cotton Cancer Center, Lebanon, New Hampshire; and the Department of Molecular Biotechnology, Aachen University, Aachen, Germany.

"We were very pleased to find that vaccination with PVX nanoparticles generated an anti-tumor response,” said Steinmetz. “But we had quite a surprise when we went on to test vaccine plus chemotherapy combinations.”

The effectiveness of the treatment was measured by inhibition of tumor growth and increased days of survival of the mice. When the two treatments were tested in the mouse melanoma model, the second approach of injecting the simple mixture of virus and solution of doxorubicin worked significantly better—by both test measurements—than injection of PVX embedded with doxorubicin.

“Frankly, our goal was to create multifunctional nanoparticles that simultaneously delivered both the immune and chemotherapeutic agent,” said Steinmetz. “Surprisingly, the simpler approach was more effective. In this case when the virus particles and doxorubicin could each work on their own, we saw a significantly better result.”

One explanation for this result is that since the viral particles are ingested by immune cells, which is part of how they stimulate an immune response, the attached doxorubicin would also be ingested. This could cause a reduction in the concentration of doxorubicin in the cancer cell and reduce its effectiveness.

The group is now testing whether they will see a similar result using other chemotherapy drugs with PVX. They are also testing PVX and doxorubicin on different types of tumors. The ultimate goal is to find the most effective combinations of virus-based nanoparticles and chemotherapeutic agents—and the method of delivery—that work to enhance anti-tumor effects. 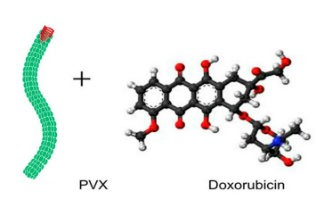 Caption: The potato virus, PVX (left) was administered in solution along with the chemotherapeutic agent doxorubicin (PVX + DOX). The two agents administered together, but not in a complex, had better anti-tumor effects in the mouse melanoma model than when doxorubicin was embedded into the PVX nanoparticle (PVX/DOX). 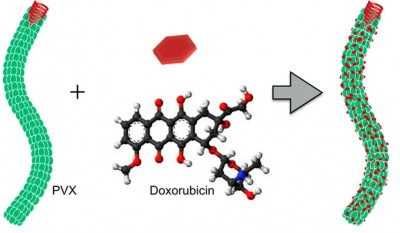