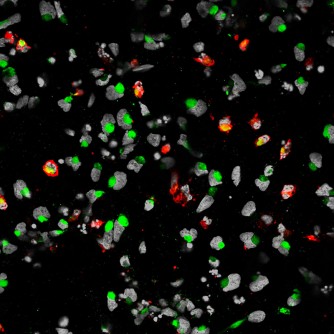 Genetic mutations in the Zika virus, shown here (in green) infecting neural cells, could cause it to replicate more efficiently, evade the body’s immune response or invade new tissues.

Newswise — How does a formerly innocuous and obscure virus like Zika transform itself into a feared pathogen inflicting a devastating impact on global health?

A new UCLA study suggests that the virus possesses the ability to mutate rapidly, allowing the current outbreak to spread swiftly around the world. The Cell Press journal, Cell Host & Microbe, published the findings today in its advance online edition.

“The Zika virus has undergone significant genetic changes in the past 70 years,” explained senior author Genhong Cheng, a professor of microbiology, immunology and molecular genetics at the David Geffen School of Medicine at UCLA. “By tracing its genetic mutations, we aimed to understand how the virus is transmitted from person to person and how it causes different types of disease.”

First isolated in 1947, the Zika virus only sporadically caused disease in Africa and Asia until the 2007 Micronesia and 2013 French Polynesia outbreaks. Scientists previously believed that infection was spread solely by mosquitoes and caused only mild illnesses.

The latest epidemic has linked the virus to fetal brain-development disorders and Guillain-Barre syndrome. New modes of transmission, including infection through sexual contact and from mother to fetus, have also surfaced.

“We don’t know why Zika infection was not associated with serious human disease, especially in newborns, until recently,” said co-author Dr. Stephanie Valderramos, a fellow in obstetrics-gynecology at the Geffen School. “We hoped that taking a closer look at the virus’ genetic changes over time would reveal clues to this mystery.”

Cheng’s laboratory collaborated with researchers at the Chinese Academy of Medical Sciences and Peking Union Medical College in Beijing to compare individual genetic differences among 41 strains of Zika virus. Thirty strains originated from humans, 10 from mosquitoes and one from monkeys.

In sequencing the virus, the team identified substantial DNA changes between the strains, showing a major split between the Asian and African lineages, as well as the human and mosquito versions.

“We suspect these mutations could help the virus replicate more efficiently, evade the body’s immune response or invade new tissues that provide a safe harbor for it to spread,” said co-author Lulan Wang, a graduate student researcher in Cheng’s laboratory.

● All contemporary human Zika strains share a genetic sequence more similar to the 1966 Malaysian strain than the 1968 Nigerian strain. This implies the strains causing the current human outbreak evolved from the Asian lineage.

● All human strains in the current epidemic resemble the 2013 French Polynesian strain more closely than the 2007 Micronesia strain, suggesting that the two strains evolved from a common viral ancestor.

● A key viral protein varied the most between the Asian human strain and the African mosquito strain, indicating a possible structural change in the virus.

Cheng and his colleagues’ next step will be to analyze the viral strains causing the current epidemic and look for genetic targets for drug and vaccine development.

“Our results have raised new questions about the evolution of the Zika virus, and highlight that a lot more research is needed to understand the relationship between the virus and human disease,” Cheng said.

The research was supported by the National Institute of Allergy and Infectious Diseases, the Ministry of Science and Technology of China, the National Natural Science Foundation of China, and the Institutional Research Fund for Thousand Talents Program at Chinese Academy of Medical Sciences.