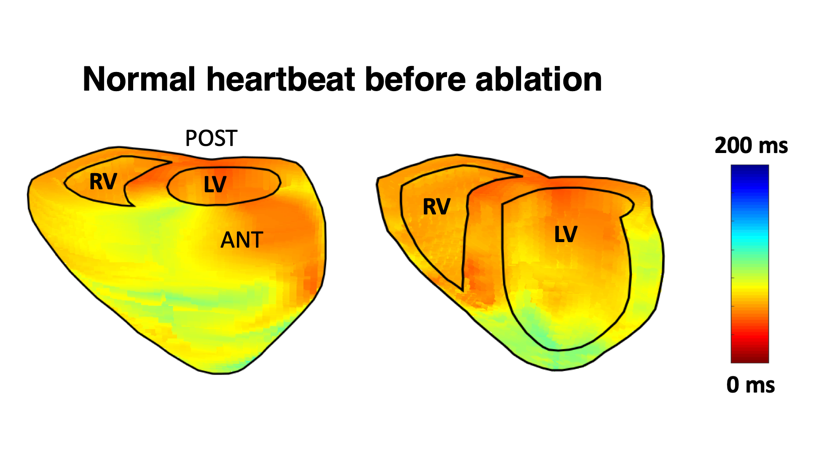 Electromechanical wave imaging (EWI) activation maps are capable of localizing the arrhythmic origin and differentiating irregular beats (right) from consecutive normal sinus rhythm beats (left) on the same patient before ablation. Red illustrates early and blue represents late activation (in milliseconds). The red arrow indicate the earliest activated region displayed by EWI, which successfully corresponds to the source of the arrhythmia in agreement with the site that was ablated with the intracardiac ablation site.LV = left ventricle, RV = left ventricle, ANT = anterior, POST = posterior.

Newswise — New York, NY—March 25, 2020—Cardiac arrhythmias are a major cause of morbidity and mortality worldwide. Currently, the 12-lead electrocardiogram (ECG) is the noninvasive clinical gold standard used to diagnose and localize these conditions, but it has limited accuracy, cannot provide an anatomical tool to visually localize the source of the arrhythmia, and depending on which clinician is looking at the signals, there might be some interpretation variability.

“This study presents a significant advancement in addressing a major unmet clinical need: the accurate arrhythmia localization in patients with a variety of heart rhythm disorders,” says Natalia Trayanova, Murray B. Sachs Endowed Chair and professor of biomedical engineering and medicine Medicine, and director of the Alliance for Cardiovascular Diagnostic and Treatment innovation at Johns Hopkins University, who was not involved with the study. “The non-invasive nature of EWI using standard hospital hardware, and its ability to visualize the arrhythmia sources in 3D render it an attractive component for inclusion in the clinical ablation procedure.”

EWI is a high-frame-rate ultrasound technique that can noninvasively map the electromechanical activation of the heart; it is readily available, portable, and can pinpoint the arrhythmic source by providing 3D cardiac maps. The new study, published online in Science Translational Medicine, evaluated the accuracy of EWI for localization of various arrhythmias in all four chambers of the heart prior to catheter ablation: the results showed that EWI correctly predicted 96% of arrhythmia locations as compared with 71% for 12-lead electrocardiogram (ECG).

“We knew EWI was feasible in individual patients and we wanted to see if it made a difference in the clinical setting where they treat many people with different types of arrhythmias,” says Elisa Konofagou, Robert and Margaret Hariri Professor of Biomedical Engineering and Radiology (Physics) who directed the study. Her group has been working on several studies with electrophysiologists in the cardiology department at Columbia University Irving Medical Center (CUIMC) and for the purpose of this study, the Konofagou team partnered with Elaine Wan, Esther Aboodi Assistant Professor of Medicine at CUIMC and co-senior author, who saw the potential of this new technology and wanted to work together.

“So, we joined forces with cardiac electrophysiologists to determine clinical utility for the first time,” Konofagou explains. “We were able to show that not only does our imaging method work in difficult cases of arrhythmia but that it can also predict the optimal site of radiofrequency ablation before the procedure where there is no other imaging tool currently available to do that in the clinic. Using EWI as a clinical visualization tool in conjunction with ECG and clinical workflow could improve discussions with patients about treatment options and pre-procedural planning as well as potentially reducing redundant ablation sites, prolonged procedures, and anesthesia times.”

The researchers ran a double-blinded clinical study to evaluate the diagnostic accuracy of EWI for localizing and identifying the sites of atrial and ventricular arrhythmias. Fifty-five patients, who had pre-existing cardiac disease including previous catheter ablations and/or other cardiovascular co-morbidities, underwent EWI scans prior to their catheter ablation procedures to generate activation maps of their hearts. The team retrospectively compared EWI maps and 12-lead ECG assessments made by six expert electrophysiologists in a team led by Wan to the site of successful ablation found on the intracardiac electroanatomical maps obtained during invasive catheter mapping.

“The accuracy of EWI was higher than that of clinical diagnosis by electrophysiologists reading standard 12-lead ECGs,” says the study’s co-first author Lea Melki, a PhD student in the department of biomedical engineering working in Konofagou’s team who teamed up with electrophysiology fellow and co-first author, Chris Grubb, to accomplish that task. “While the inter-observer variability of our expert electrophysiologists may have played a role, we also know that 12-lead ECGs are limited in diagnosing arrhythmias from the posterior side of the heart, while EWI allows for easier anatomical location in 3D. In fact, a big advantage of EWI is the ease with which activation maps can clearly demarcate the earliest sites of interest along with direct anatomic visualization using standard echocardiography scans that clinicians are already trained on.”

The researchers are now planning a long-term clinical study, set to start later this year that will use EWI prediction to improve ablation outcomes by increasing the accuracy of the ablation site and spare normal tissue from ablation.

“It’s really clear now that, when used in conjunction with standard 12-lead ECG, EWI can be a valuable tool for diagnosis, clinical decision making, and treatment planning of patients with arrhythmias,” says Melki. “We believe our EWI technique, with minimal training, will result in higher accuracy in the site of ablation, a faster procedure, and fewer complications and repeat visits after the procedure. This is a win-win for everyone, both patients and clinicians.”