Unearthed: The Cannibal Sharks of a Forgotten Age 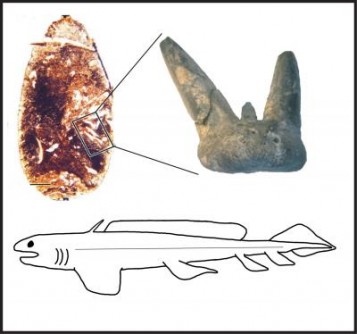 The tooth in coprolite, up-close, and with an artist's impression of what the cannibal shark looked like 300 million years ago. 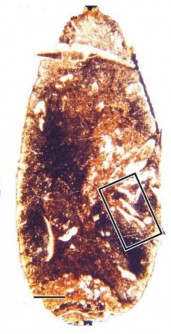 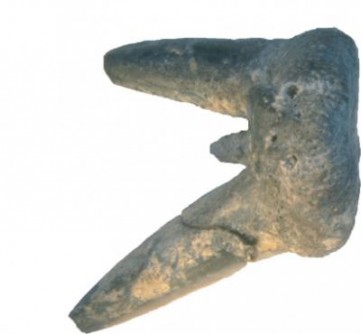 The tooth of Orthacanthus in oral view.

Newswise — Dublin, Ireland, Thursday 11th August, 2016 - Scientists have discovered macabre fossil evidence suggesting that 300 million-year-old sharks ate their own young, as fossil poop of adult Orthacanthus sharks contained the tiny teeth of juveniles. These fearsome marine predators used protected coastal lagoons to rear their babies, but it seems they also resorted to cannibalising them when other food sources became scarce.

Three hundred million years ago, Europe and North America lay on the equator and were covered by steamy jungles (the remains of which are now compacted into coal seams). The top predators of these so-called "Coal Forests" were not land animals, but huge sharks that hunted in the oily waters of coastal swamps.

The fossil evidence for shark cannibalism comes from distinctive spiral-shaped coprolites (fossil poop) found in the Minto Coalfield of New Brunswick, Canada. The poop is known to have been excreted by Orthacanthus because this shark had a special corkscrew rectum that makes identification easy. The poop is packed full of the teeth of juvenile Orthacanthus, confirming that these sharks fed on their own babies. This is called "fillial cannibalism".

PhD candidate in the School of Natural Sciences, Trinity College Dublin, Aodhán Ó Gogáin, made the extraordinary discovery. His findings have just been published in the journal Palaeontology. He said: "Orthacanthus was a three-metre-long xenacanth shark with a dorsal spine, an eel-like body, and tricusped teeth. There is already evidence from fossilised stomach contents that ancient sharks like Orthacanthus preyed on amphibians and other fish, but this is the first evidence that these sharks also ate the young of their own species."

Professor Mike Benton, University of Bristol, is a co-author of the study. He said: "As palaeontologists cannot observe predator-prey relationships directly in the way that a zoologist can, they have to use other methods to interpret ancient food webs. One method is by probing the contents of coprolites [fossil poop] as we have done here."

Dr Howard Falcon-Lang, Royal Holloway University of London is another co-author. He said: "We don't know why Orthacanthus resorted to eating its own young. However, the Carboniferous Period was a time when marine fishes were starting to colonise freshwater swamps in large numbers. It's possible that Orthacanthus used inland waterways as protected nurseries to rear its babies, but then consumed them as food when other resources became scarce."

Aodhán Ó Gogáin added: "Orthacanthus was probably a bit like the modern day bull shark, in that it was able to migrate backwards and forwards between coastal swamps and shallow seas. This unusual ecological adaptation may have played an important role in the colonisation of inland freshwater environments."

The Minto Coalfield in Canada, where the fossils were discovered, is of considerable historical importance, being the first place in North America where settlers mined coal in the early 17th Century. 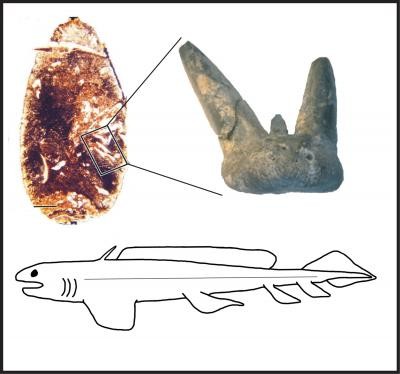 Caption: The tooth in coprolite, up-close, and with an artist's impression of what the cannibal shark looked like 300 million years ago. 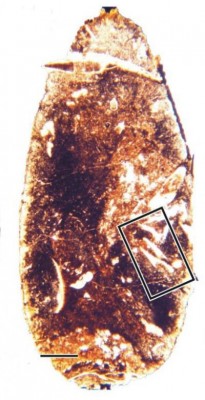 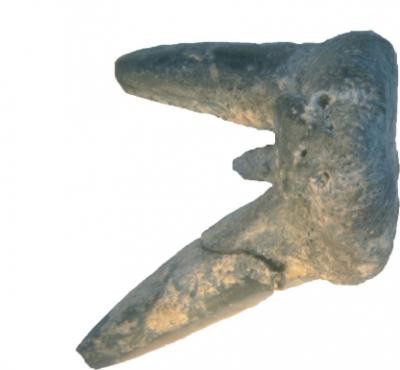 Caption: The tooth of Orthacanthus in oral view.