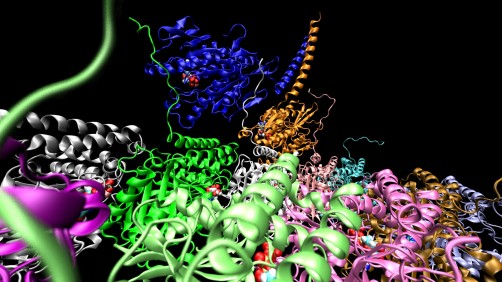 A computer simulation of Kinesin and the paths it moves on

Newswise — Similar to roadways across the country, every cell in our body has a network of paths, and a professor at Texas A&M University has zoomed in to the molecular level to research the proteins that travel along this transportation system.

Dr. Wonmuk Hwang, associate professor in the Department of Biomedical Engineering, researches motor proteins, which act as vehicles to carry cargo inside a cell in the body. His latest research has been focused on kinesin, the smallest protein in the human body that can walk with two “legs” and carry material throughout the body on intracellular filaments called microtubules.

His findings have been recently published in a paper in the journal eLife. The goal of the research was to study how kinesins process fuel to generate that walking motion.

“If you compare this with the macroscopic gasoline engine, you burn the gas, you generate the heat and you power the car,” Hwang said. “This is a molecular motor (in the human body), so the energy source is not just burning the fuel but actually, when fuel binds to this kinesin motor, there is binding energy associated and burning. After burning you have to exhaust the product.”

Hwang said each step in the energy binding, burning and exhausting processes plays a role in the movement of the kinesin in specific phases of its walking pattern. The energy for the movement comes from adenosine triphosphate (ATP) molecules, which Hwang said are the main fuel of the body.

“When you eat something, the end product of the energy you take in is converted into ATP to be used in the cell,” he said.

According to Hwang, one surprise from his research findings was how the kinesins obtain the ATP. Instead of the ATP binding to the protein in random encounters, Hwang said the kinesins have loops on their surfaces that capture nearby fuel and then assist in the burning and discarding of the pieces.

Kinesins play a vital role in many cellular processes, and understanding how they function can have multiple biomedical applications. Hwang said his research served dual purposes — laying the foundation for applications down the road and the advancement of knowledge.

Hwang said one of the future applications of the research is in anti-cancer drugs. A subset of kinesins are key players in cell division, and knowledge about their movement can help scientists and engineers develop drugs that will inhibit the kinesins from walking and dividing cancer cells.

“If you know where to target then people can start to screen for drugs that particularly bind to those domains to modify or control those motors,” Hwang said.

While the protein and their distinct bipedal walking motion were discovered in the mid-1980s, how the motor worked remained a mystery.

“Compared to the engine of a vehicle, whose working principles are understood well enough to improve its design to fit its purpose, the lack of knowledge about how kinesins walk makes it difficult to utilize these nanoscale machines for biotechnology applications,” Hwang said.

Hwang has worked since 2008 on the project and collaborated with researchers at Harvard University and Vanderbilt University to carry out computer simulations that were unprecedented in scale, and discovered how the fuel processing steps are achieved.

Looking forward, Hwang said he would like to further characterize properties of kinesins and find how the “legs” communicate with each other to facilitate the bipedal motion.

“It’s not like our legs where there’s a nervous system and so forth — it’s just molecules,” Hwang said. “People don’t know how communication between the ‘feet’ happens, because you have to make them coordinated. How does the protein know when it’s making a step? There must be some communication.”