Buried Fossil Soils Found to Be Awash in Carbon 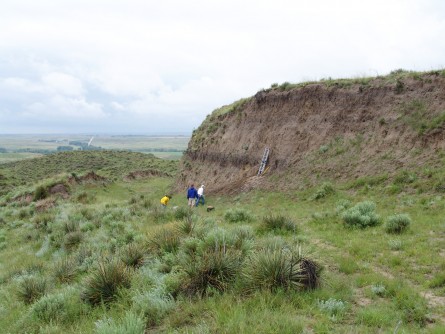 An eroding bluff on the U.S. Great Plains reveals a buried, carbon-rich layer of fossil soil. A team of researchers led by UW-Madison Assistant Professor of Geography Erika Marin-Spiotta has found that buried fossil soils contain significant amounts of carbon and could contribute to climate change as the carbon is released through human activities such as mining, agriculutre and deforestation.

NOTE: A high-resolution photo to accompany this release can be downloaded at http://www.news.wisc.edu/newsphotos/soils-2014.html

Newswise — MADISON, Wis. — Soils that formed on the Earth’s surface thousands of years ago and that are now deeply buried features of vanished landscapes have been found to be rich in carbon, adding a new dimension to our planet’s carbon cycle.

The finding, reported today (May 25, 2014) in the journal Nature Geoscience, is significant as it suggests that deep soils can contain long-buried stocks of organic carbon which could, through erosion, agriculture, deforestation, mining and other human activities, contribute to global climate change.

“There is a lot of carbon at depths where nobody is measuring,” says Erika Marin-Spiotta, a University of Wisconsin-Madison assistant professor of geography and the lead author of the new study. “It was assumed that there was little carbon in deeper soils. Most studies are done in only the top 30 centimeters. Our study is showing that we are potentially grossly underestimating carbon in soils.”

The soil studied by Marin-Spiotta and her colleagues, known as the Brady soil, formed between 15,000 and 13,500 years ago in what is now Nebraska, Kansas and other parts of the Great Plains. It lies up to six-and-a- half meters below the present-day surface and was buried by a vast accumulation of windborne dust known as loess beginning about 10,000 years ago, when the glaciers that covered much of North America began to retreat.

The region where the Brady soil formed was not glaciated, but underwent radical change as the Northern Hemisphere’s retreating glaciers sparked an abrupt shift in climate, including changes in vegetation and a regime of wildfire that contributed to carbon sequestration as the soil was rapidly buried by accumulating loess.

“Most of the carbon (in the Brady soil) was fire derived or black carbon,” notes Marin-Spiotta, whose team employed an array of new analytical methods, including spectroscopic and isotopic analyses, to parse the soil and its chemistry. “It looks like there was an incredible amount of fire.”

The team led by Marin-Spiotta also found organic matter from ancient plants that, thanks to the thick blanket of loess, had not fully decomposed.Rapid burial helped isolate the soil from biological processes that would ordinarily break down carbon in the soil.

Such buried soils, according to UW-Madison geography Professor and study co-author Joseph Mason, are not unique to the Great Plains and occur worldwide.

The work suggests that fossil organic carbon in buried soils is widespread and, as humans increasingly disturb landscapes through a variety of activities, a potential contributor to climate change as carbon that had been locked away for thousands of years in arid and semiarid environments is reintroduced to the environment.

The element carbon comes in many forms and cycles through the environment – land, sea and atmosphere – just as water in various forms cycles through the ground, oceans and the air. Scientists have long known about the carbon storage capacity of soils, the potential for carbon sequestration, and that carbon in soil can be released to the atmosphere through microbial decomposition.

The deeply buried soil studied by Marin-Spiotta, Mason and their colleagues, a one-meter-thick ribbon of dark soil far below the modern surface, is a time capsule of a past environment, the researchers explain. It provides a snapshot of an environment undergoing significant change due to a shifting climate. The retreat of the glaciers signaled a warming world, and likely contributed to a changing environment by setting the stage for an increased regime of wildfire.

“The world was getting warmer during the time the Brady soil formed,” says Mason. “Warm-season prairie grasses were increasing and their expansion on the landscape was almost certainly related to rising temperatures.”

The retreat of the glaciers also set in motion an era when loess began to cover large swaths of the ancient landscape. Essentially dust, loess deposits can be thick — more than 50 meters deep in parts of the Midwestern United States and areas of China. It blankets large areas, covering hundreds of square kilometers in meters of sediment.

The study conducted by Marin-Spiotta, Mason, former UW-Madison Nelson Institute graduate student Nina Chaopricha, and their colleagues was supported by the National Science Foundation and the Wisconsin Alumni Research Foundation.# # #