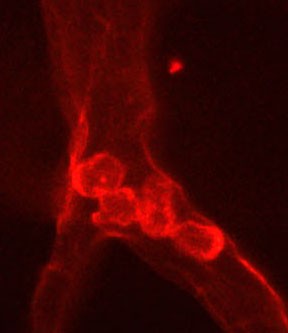 Newswise — Johns Hopkins researchers have discovered a cell signaling pathway in mice that triggers vision loss in patients with diabetic retinopathy and retinal vein occlusion – diseases characterized by the closure of blood vessels in the retina, leading to blindness. In experiments that suppressed vascular endothelial growth factor (VEGF) in the eye, researchers were able to re-establish normal blood flow in the retina, offering a potential means of stalling or even reversing diabetes-related blindness.

In the study, published Sept. 21 in the Journal of Clinical Investigation Insight, Johns Hopkins researchers found that increased VEGF levels in the retina attract white blood into the retina, where they adhere to the walls of blood vessels, disrupting blood flow. Reducing VEGF or blocking it with an antibody caused the white blood cells to dissipate, opening the closed vessels and restoring blood flow to the area.

“This work is particularly important because it helps explain why diabetic retinopathy and retinal vein occlusion continue to worsen across a patient’s lifetime if left untreated,” says Peter Campochiaro, M.D., director of the Retinal Cell and Molecular Laboratory and professor of ophthalmology at the Johns Hopkins Wilmer Eye Institute.

The inspiration for the study came from observations made in clinical trials for ranibizumab, a drug designed to block VEGF in patients with diabetic retinopathy and retinal vein occlusion. They saw that after VEGF was suppressed, the patients’ conditions not only improved, but the treatment also improved blood flow to parts of the retina that were previously blocked.

“We all believed that this disease caused the blood vessels to die off and was therefore irreversible,” says Campochiaro. This skepticism spurred his peers to conduct further studies, which confirmed the observation and heightened his motivation to understand exactly how it occurs.

To investigate, Campochiaro chose six genetically modified mice to overexpress VEGF when given a drug called doxycycline. After three days of VEGF overexpression, Campochiaro’s team observed the telltale clumps of white blood cells collecting in the blood vessels of the retina. The researchers then stopped overexpressing VEGF in these mice, and 17 days later, they found that the white blood cell clumps had broken up and blood flow returned to areas of the retina that had been cut off.

The researchers then explored the cellular signals responsible for the vessel-plugging effects of VEGF. They found that when white blood cells interacted with VEGF, they were triggered to migrate into the blood vessels of the retina. The high levels of VEGF also activated a transcription factor, called NF-?B, which is responsible for the expression of many different kinds of proteins in the body. Most importantly, it controls a cell adhesion molecule called VCAM-1, which acts as an adhesive between many types of immune cells and blood vessels.

The group then repeated their previous experiment, but administered an antibody targeted to inhibit VCAM-1 while also increasing VEGF expression. When compared to the retinal vessels of mice not treated with the inhibitor, the VCAM-1 inhibitor-treated mice showed significantly less white blood cell clumps and better blood flow in the retinal blood vessels. This means that VEGF drives the early stages of diabetic retinopathy and retinal vein occlusion, as well as the late stages when vision is decreased, says Campochiaro.

“It would be useful to block VEGF throughout all stages and not just late in the disease when patients are symptomatic. However, this is impractical with our current approaches, which require injection of anti-VEGF proteins into the eye every 4-6 weeks,” says Campochiaro.

However, he is hopeful that technology already in development will allow for sustained delivery of anti-VEGF drugs and gene therapy to express anti-VEGF proteins in the eye and will make long-term treatment more feasible. He adds that blocking VCAM-1 could add an additional benefit by further slowing vessel closure and progression of disease.

Diabetic retinopathy is the leading cause of blindness in the U.S., affecting approximately five million adults. Careful management of diabetes and frequent injections of an anti-VEGF agent are effective in reducing the progression to blindness in many patients, but each treatment carries the risk of adverse reactions or infection. Retinal vein occlusion is the second most common retinal vascular disease after diabetic retinopathy.

Other researchers involved in this study include Yuanyuan Liu, Jikui Shen, Seth Fortmann and Jiangxia Wang of the Johns Hopkins University School of Medicine and Dietmar Vestweber of the Max Planck Institute of Molecular Biomedicine.

This work was supported by the Andrew and Yvette Marriott, the Per Bang-Jensen and Jean Lake funds from the Max Planck Society and the DFG Excellence Cluster Cells in Motion.