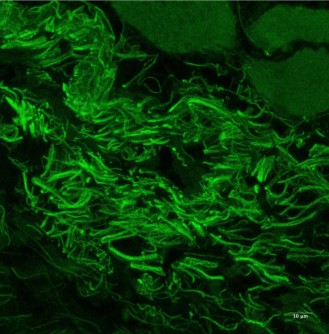 C. mast is a commensal bacterium living on the surface of the eye.

Newswise — Bugs in your eyes may be a good thing. Resident microbes living on the eye are essential for immune responses that protect the eye from infection, new research shows. The study, which appears in the journal Immunity on July 11, demonstrates the existence of a resident ocular microbiome that trains the developing immune system to fend off pathogens. The research was conducted at the National Eye Institute (NEI), part of the National Institutes of Health.

“This is the first evidence that a bacterium lives on the ocular surface long-term,” explained Rachel Caspi, Ph.D., senior investigator in NEI’s Laboratory of Immunology. “This work addresses a longstanding question about whether there is a resident ocular microbiome.”

For years, the ocular surface was thought to be sterile because of the presence of an enzyme called lysozyme that destroys bacteria, antimicrobial peptides, and other factors that rid the eye of microbes that may land from the air (or from our fingers) onto the surface of the eye.

Anthony St. Leger, Ph.D., research fellow in Caspi’s laboratory, was able to culture bacteria from the mouse conjunctiva, the membrane that lines the eyelids. He found several species of Staphylococci, which are commonly found on the skin, and Corynebacterium mastitidis (C. mast). But it wasn’t clear whether those microbes had just arrived on the eye and were en route to being destroyed, or whether they lived on the eye for extended periods of time.

The researchers found that C. mast, when cultured with immune cells from the conjunctiva, induced the production of interleukin (IL)-17, a signaling protein critical for host defense. Upon further investigation, they found that IL-17 was produced by gamma delta T cells, a type of immune cell found in mucosal tissues. IL-17 attracted other immune cells called neutrophils—the most abundant type of white blood cell—to the conjunctiva and induced the release of anti-microbial proteins into the tears. The researchers are currently investigating the unique features that can make C. mast resistant to the immune response that it itself provokes and allow it to persist in the eye.

To determine whether the microbe was contributing to the immune response in mice, St. Leger formed two groups, one control (with C. mast) and one treated with an antibiotic to kill C. mast and other ocular bacteria, and then challenged them with the fungus, Candida albicans. The mice receiving antibiotics had a reduced immune response in their conjunctiva and were not able to eliminate C. albicans, leading to full-blown ocular infection. The control mice with normal C. mast on the other hand were able to fend off the fungus.

St. Leger noticed that mice from the NIH animal facility had C. mast on their eyes, but mice from the Jackson Laboratory (JAX) in Maine and other commercial vendors did not. This fortuitous observation allowed the researchers to determine if C. mast was truly a resident microbe, as opposed to a transient microbe that lands on the eye from the environment. They did this by inoculating C. mast-free mice with the microbe and determining if the microbe could be cultured from those animals’ eyes many weeks later. They also determined whether the microbe could easily be transmitted among cagemates.

When inoculated with C. mast, JAX mice produced conjunctival gamma delta T cells that released IL-17. Bacteria could still be cultured from their eyes after many weeks. By contrast, several other strains of bacteria inoculated onto the eyes of JAX mice disappeared without inducing local immunity. “We still don’t know what enables C. mast to successfully establish itself in the eye, whereas other similar bacteria fail to colonize,” Caspi said.

Interestingly, C. mast was not spread to cage-mates even after eight weeks of co-housing; however, C. mast can be passed from mother to pup. Both of these observations support the notion that C. mast is a resident commensal, not a bacterium that is continually re-introduced to the eye from the skin or the environment, Caspi explained.

Although C. mast appears to stimulate a beneficial immune response, there may be situations in which it could cause disease, St. Leger noted. For instance, the elderly tend to have suppressed immune systems, which might allow C. mast to grow out of control and cause disease.

The researchers are currently investigating whether other bacteria play a role in regulating eye immunity.

“We’ve established the proof of concept of a central ocular microbiome,” St. Leger said. “It's well known that there are good bacteria in the gut that modulate the immune response. Now we show that this relationship exists in the eye. That's important for how we think about treating ocular disease.”

It’s unclear how these results may translate to human health and immunity. Patients should follow their eye care professional’s advice when using antibiotics for infections of the eye.