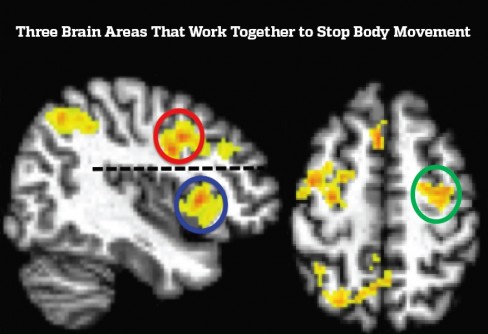 The three key brain areas involved in stopping what you've started are circled.

Newswise — When we try to stop a body movement at the last second, perhaps to keep ourselves from stepping on what we just realized was ice, we can’t always do it — and Johns Hopkins University neuroscientists have figured out why.

Stopping a planned behavior requires extremely fast choreography between several distinct areas of the brain, the researchers found. If we change our mind about taking that step even a few milliseconds after the original “go” message has been sent to our muscles, we simply can’t stop our feet.

“We have to process all of these pieces of information quickly,” said senior author Susan Courtney, a professor of psychological and brain sciences. “The question is: When we do succeed, how do we do that? What needs to happen in order for us to stop in time?”

These findings, which will appear Dec. 20 in the journal Neuron, map the neural basis for inhibiting movement. They help explain what’s going wrong in the brain when people fall more as they age and when addicts can’t stop binge behavior.

Scientists had believed only one brain region was active when people changed plans. But the findings of Courtney’s team suggest it takes a lightning-fast interaction between two areas in the prefrontal cortex and another in the pre-motor cortex to stop, reverse or otherwise change a plan already in progress.

There is even another brain area, Courtney says, that continues to process what we should have done if we are unable to stop. She jokingly calls it the “oops” area.

In addition to all three areas of the brain communicating successfully, the key to being able to stop, the researchers found, is timing.

Suppose you’re driving and approaching an intersection when the light turns yellow. You decide to accelerate and speed though. But just after you send that decision to the part of the brain that will move your foot to hit the gas, you notice a police car and change your mind.

“Which plan is going to win?” said first author Kitty Z. Xu, a former Johns Hopkins graduate student who is now a researcher at Pinterest. “The sooner you see the police car after deciding to go through the light, the better your chance of being able to move your foot to the break instead.”

And by soon, Xu means milliseconds.

If you attempt to change your mind after 100 milliseconds or less, you most likely can. If it takes you 200 milliseconds or more -- that’s less than a quarter of a second -- you’re still going through with the original plan. That’s because the original signal is already on its way to the muscles by then — past the point of no return.

“If you’re already executing the plan when you see the police car,” Xu said, “you’re going to go through the light.”

The team devised a near-identical computer task for human and non-human subjects. While having their brain activity monitored, both the people and one monkey saw one of two shapes on the screen – one shape meant that blue means stop and yellow means go, the other shape meant the opposite. A black circle would then appear and participants would try to move their eyes to look at it quickly. But then a blue or yellow dot might appear, after varying lengths of time, and subjects would have to stop or continue their planned eye movement.

The researchers were able to observe what happened across the full brain with the human fMRI results, while electrodes implanted in the monkey’s brain measured single cells. Having strong, converging results at both the macro and micro levels provided a more holistic view of how the prefrontal cortex and the pre-motor cortex communicate with each other to stop, Xu said.

When these brain areas don’t properly communicate, or don’t interact fast enough, that’s when we run into trouble, Courtney says.

“We know people with damage to these parts of the brain have trouble changing plans or inhibiting actions,” she said. “We know as we age, our brain slows down and it takes us longer to find words or to try to make these split-second plan changes. It could be part of the reason why old people fall.”

Knowing more about how the brain can stop an intended activity could also be revealing for those dealing with addictions, Courtney said.

“We think there are similar processes in ‘should I do this’ and ‘can I turn off that thought about the drink,’” Courtney said. “The sooner I can turn off the plan to drink, the less likely I’ll carry out the plan. It’s very relevant.”