Preparation, Attention to Detail Translates to Excellence in Cardiac Care 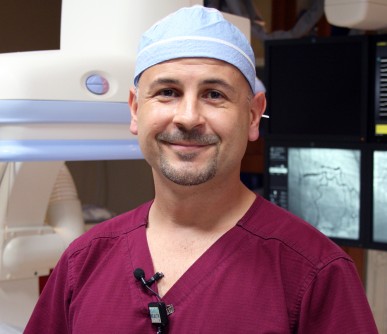 Newswise — Long before a patient is wheeled in for a life-saving stent or a coronary image of the heart, Jaromir “Jeremy” Bobek, cardiovascular technologist/invasive specialist, lays out essential supply trays and turns on cardiac monitors, computers and imaging equipment that quickly fill the Catheterization Lab at Harris Health System’s Ben Taub Hospital with a buzz of beeps and flashing lights.

It’s this preparation and attention to detail that has garnered the hospital national recognition for its care of ST-elevation myocardial infarction (STEMI) cases—one of the most serious types of heart attacks. The American Heart Association presented the hospital its Mission Lifeline: STEMI Receiving Center Gold-Plus Award for cardiac expertise—the treatment of STEMIs within the 90-minute national benchmark. In fact, the door-to-balloon/device times is one of the fastest times in the country—averaging 45 minutes.

No one is happier with the hospital’s care for STEMI patients than Graciela Del Angel. The 60-year-old suffered a heart attack that required two stents to unclog severe blockages to her heart. Doctors say any delay in getting her to a capable hospital like Ben Taub could have been deadly for her.

“I was surrounded by people,” she recalls of the immediate attention she received in the hospital’s emergency center. “I was scared until a nurse explained they were doing everything so fast to help me.” Family rushed Del Angel to the hospital after she had experienced severe chest pain and difficulty breathing most of the day. “The next thing I remember was waking up with doctors all around,” she says. “I felt safe and I could breathe again.”

Bobek says the results of STEMI procedures can be that quick. In hindsight, the family chose well. Unfortunately, not all hospitals offer elite cardiology care. Bobek and the Ben Taub Hospital team have worked tirelessly to raise the service’s standing and national recognition.

Bobek has seen a lot in his 18 years of working at Harris Health. He credits the work of the interdisciplinary team of physicians, nurses and techs with the service line’s success. Among the various procedures offered include percutaneous coronary intervention (PCI), heart catheterization, myocardial biopsy, alcohol septal ablation, implantable cardiac defibrillators and pacemakers. The lab sees an average of 40 diagnostic procedures and 16 PCIs a week.

“Most rewarding is having someone come in with a serious or significant problem that’s causing them to feel bad and having us reverse that disease process by putting in a balloon or stent in their artery to make them feel well again,” he says. “You see them feeling better, able to breathe well and no longer feel tightness on their chest almost immediately after a procedure.”

Many people believe the cath lab involves surgery or cutting into the body. Surprisingly all procedures are done entirely with catheters running through intravenous inserts in the arm or leg. In most cases, there’s very little need for full anesthesia—local anesthesia or mild sedatives will suffice, Bobek says.

Aside from treating heart attacks, the team sees a lot of patients requiring diagnostic tests including coronary angiography, the gold standard of diagnostic tools for identifying heart problems.

“It’s nice to share good news with someone who has fear or is in doubt for weeks or months and tell them they don’t have any blockages and that they don’t have to worry about having a heart attack,” Bobek says.

Ben Taub is accredited by the DNV GL Healthcare and is a consistent winner of American Heart Association annual recognitions. Additionally, the hospital has the designations of NCDR-Action Registry Platinum Performance Achievement Award and Chest Pain Accreditation from the Society of Chest Pain Centers.