Revealed: How a Virus Tricks Our Cells Into Helping It Build Its Invasion Route

Polyomavirus harnesses cellular “motors” to bring together the supplies that can build a portal for itself, researchers show

Live cell imaging of protein "focus" points created in the endoplasmic reticulum membrane after polyomavirus infection. Time sequences of the images are shown at the top left corner and indicate time after addition of linker drug. The different color arrows (yellow, blue and pink) represent small foci that fuse into a larger focus (yellow and blue to green and then green and pink to red) over time. 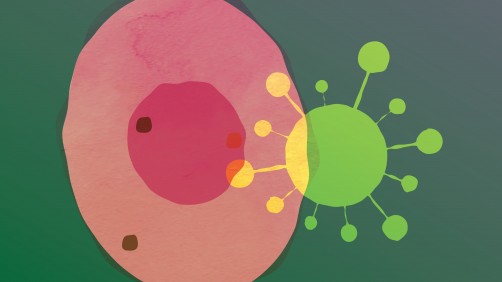 University of Michigan
Previous Next

Newswise — ANN ARBOR, Mich. -- Every cell in our body runs like a tiny factory that makes specialized products, using the carefully guarded instructions kept in the CEO’s office.

But every once in a while, an invader tries to get inside and hijack the whole works, through a combination of industrial espionage and hostile takeover. If it succeeds in getting into the CEO’s office – the nucleus, where the DNA plans are kept -- things never end well for the original factory.

Scientists still don’t know how viruses accomplish this feat without getting caught by the factory security guards. But new research from the University of Michigan reveals important clues about one of the most mysterious types, called polyomaviruses.

The findings could aid the search for new treatments or preventive strategies against the problems that polyomaviruses can cause, including the deadly skin cancer called Merkel cell carcinoma, and fatal problems in people who have weak immune systems from organ transplants and cancer treatment.

Publishing in Nature Communications, a U-M team reports their findings about a kind of factory takeover that actually fools the cell into building the very doorway that can let polyomavirus get close to the CEO’s office. A few more steps, and it can take over the whole factory.

“Our results suggest polyomavirus hijacks a kind of cellular molecular motor whose normal job is to transport cargoes, and uses it to build a penetration site or portal,” says Billy Tsai, Ph.D.,  a U-M Medical School Department of Cell and Developmental Biology researcher who worked with postdoctoral fellow Madhu Sudhan Ravindran, Ph.D. and others to make the discovery.

That kind of motor – called kinesin-1 – acts like an army of forklifts in the factory. Each kinesin-1 molecule travels along tiny stiff paths called microtubules, to bring loads of proteins where they need to go inside the cell in order to build products.

But according to the team’s new findings, each polyomavirus particle tricks some of these forklifts into bringing just what the virus needs to build its own door. Once built, that door leads into the waiting room just outside the CEO’s office – the area inside the cell nearest the nucleus.

“From the cell’s point of view it’s a mild process,” adds Ravindran. “Only a few virus particles end up being successful – but once they are, they can reach the nucleus, letting a while gang of thieves loose.”

Scientists around the world have studied polyomavirus for decades, but none has been able to figure out how it achieves this key step – until now.

Could the new findings help lead to better prevention or treatment against Merkel cell cancer, or other polyomavirus diseases that affect organ transplant recipients, HIV/AIDS patients, and cancer survivors?

It’s too early to say, says Tsai, who is the Corydon Ford Collegiate Professor and a member of U-M's Biological Sciences Scholars Program. But he notes that some drug companies are already creating medications that aim to block other cellular motors and keep cancer cells from dividing.

To do the research, Tsai and Ravindran teamed up with Kristen Verhey, Ph.D., the interim chair of Cell and Developmental Biology at U-M, and her postdoctoral fellow Martin Engelke, Ph.D. They have developed specialized tools that allow researchers to see activity along the microtubules and other structural “skeleton” elements inside cells.

The team used a polyomavirus that infects monkeys but not people – called SV40 – and looked at how it interacted with the membrane that encloses the endoplasmic reticulum, or ER.

If a cell is a factory, and the nucleus is the boss’s office with the “blueprints” for the products the factory makes, then the ER is the factory floor. It’s where the orders from management get processed, and where products get made from raw materials and packaged up to go to their next step.

Scientists already knew that polyomaviruses enter our cells by picking a lock in the factory wall – and riding in a shipping container called a endosome straight to the ER. It’s as if they hopped in a mail cart and rode it straight to the factory floor.

But once in the ER, the viruses seem trapped. Unlike some types of virus, polyomaviruses don’t have a membrane surrounding their hard inner shell – one that can bind with the ER membrane and let them escape.

The new research shows how they achieve this feat instead: by binding to a protein in the ER membrane, and using it to summon the kinesin-1 forklifts and certain supplies that they can carry.

If enough virus particles get this to happen in a certain area, they can create a site where the ER membrane can be penetrated – what the U-M researchers have dubbed a “focus”.

While many kinesin molecules travel along straight microtubules that head from the ER to the outer edges of cells, the researchers also show that kinesin-1 especially likes to travel along microtubules that bend and curve to stay near the nucleus. That makes it ideal for constructing that “focus” point and allowing the virus to escape the ER into the space near the nucleus.

Polyomaviruses aren’t the only viruses that lack an envelope, or membrane, that could make it easier for them to bind with our cells’ own outer and ER membranes.

Papillomavirus – which causes many cases of cervical cancer – and polio virus are among other non-enveloped viruses that also have to figure out a way to breach both cell and ER membranes. The viruses are too big to use existing openings. So the new research may aid understanding of them too.

The exact way they summon those forklifts still isn’t clear, but Tsai and Ravindran are working on finding it.

They’re also looking at how the polyomavirus that has succeeded in getting out of the ER membrane manages to infiltrate the CEO’s office – the nucleus – and inject its own genetic material. That allows the virus to hijack the factory to make copies of itself, and then self-destruct to send those new viruses into the body.

“Only a few particles end up being successful, with only one to two percent reaching their final destination,” Tsai notes. “They have to be able to do that without destroying the normal function of kinesin-1. Now that we understand this, our goal should be finding a way to destroy this specific kind of motor activity without harming the infected cell.”

The research was funded by the National Institutes of Health (GM113722, AI064296) and also received support from the U-M Medical School’s Protein Folding Diseases Initiative.