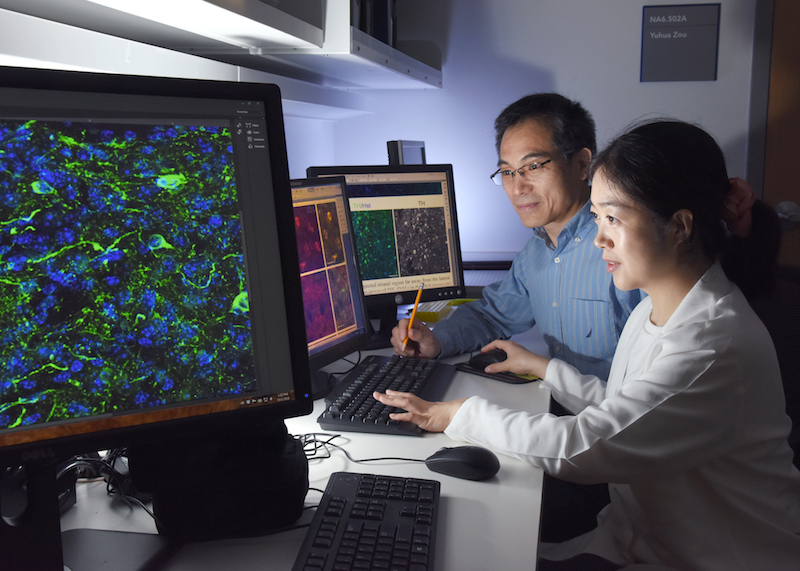 The study, published today in Stem Cell Reports,reveals the possibility of changing mature neurons from one kind to another without relying on stem cells, contrary to the prevailing view.

The mouse study indicates that the brain’s neurons are more changeable in adulthood than previously thought, said corresponding author Dr. Chun-Li Zhang, Professor of Molecular Biology at UT Southwestern Medical Center. The long-held belief was that a neuron’s identity was sealed well before adulthood and that one kind of neuron could not morph into another variety, he added.

“To find that we could manipulate neurons to change their identity in adulthood was truly unexpected,” said Dr. Zhang, a W.W. Caruth, Jr. Scholar in Biomedical Research, adding that insights into neuronal plasticity and cell identity maintenance may someday lead to therapeutic strategies for treating neurological diseases through reprogramming of local neurons.

“Initially, I was a little disappointed that we altered the properties of medium spiny neurons and not the supporting glial cells we were targeting,” he said. “But when we realized the novelty of our results, we were amazed. To our knowledge, changing the identity of resident and mature neurons had never been accomplished.”

Because the neurotransmitter dopamine is lost in movement disorders like Parkinson’s disease, many neuroscientists are interested in the possibility of someday creating new dopamine-producing neurons. Dopaminergic cells are important for controlling voluntary movement and emotions such as motivation and reward that drive behavior, he explained.

For proper function, levels of the neurotransmitters GABA, dopamine, and others need to exist in a delicate balance in the brain, he said. Because dopamine is involved in reward behavior, including addictive behaviors, any potential treatment to increase dopamine levels would also need a way to keep the levels of other neurotransmitters in balance, he added.

The mature medium spiny neurons that changed their identities in this study usually produce GABA, an inhibitory neurotransmitter that targets other neurons throughout the adult brain, Dr. Zhang explained.

Dr. Zhang and his team used a viral vector – a tool commonly used by molecular biologists to deliver genetic material into cells – to administer a cocktail of genes expected to encourage reprogramming to live mouse brains in an attempt to induce the glia to change into dopamine-producing neurons. Glia – from the Greek word for “glue” – are cells that encircle neurons to provide support, insulation, and protection.

The researchers initially saw new dopamine neurons and thought the glia had converted. However, many rounds of cell lineage testing revealed that the glia remained unchanged.

“We got the new cells we wanted,” Dr. Zhang said. “But, they did not originate from glial cells.”

The unexpected results led to intense follow-up experiments that confirmed the team’s suspicion that the new cells were directly transformed from mature GABA neurons. The new cells were more like dopamine-containing neurons, despite retaining some traits of the original cells, he said, adding that characterizing the cells and their genetics in more detail is the laboratory’s current goal.

“Rather than originating from glia, the new dopamine cells came from local, existing mature neurons without passing through a stem cell state,” Dr. Zhang said. “This is a mature cell-to-mature cell transformation.”

UT Southwestern, one of the premier academic medical centers in the nation, integrates pioneering biomedical research with exceptional clinical care and education. The institution’s faculty has received six Nobel Prizes, and includes 22 members of the National Academy of Sciences, 16 members of the National Academy of Medicine, and 15 Howard Hughes Medical Institute Investigators. The faculty of more than 2,700 is responsible for groundbreaking medical advances and is committed to translating science-driven research quickly to new clinical treatments. UT Southwestern physicians provide care in about 80 specialties to more than 105,000 hospitalized patients, nearly 370,000 emergency room cases, and oversee approximately 2.4 million outpatient visits a year.