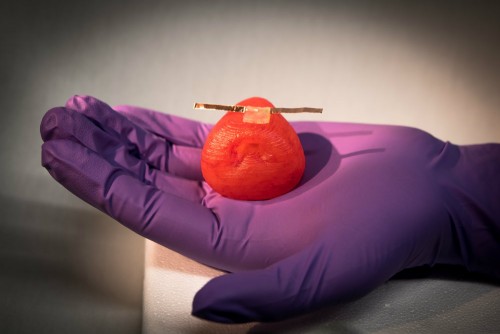 3D printed model of a patient-specific prostate has the texture and elasticity of an actual prostate. The gold foil electrodes on top form contacts to the 3D printed sensor, which provides tactile feedback during surgical rehearsal.

Their initial work demonstrates how the physically accurate printing of a patient’s prostate could provide superior preoperative planning and rehearsal that may have implications for surgical outcomes in thousands of patients worldwide.

“This project illustrates how successfully mechanical engineers and medical doctors can collaborate and develop novel and promising technologies for medical treatment,” said Šeila Selimović, Ph.D., Director of the NIBIB program in Biosensors. “The combination of this novel and unique 3D printer with the prostate glands MRIs and prostate tissue samples is what enabled the researchers to create a 3D printed prostate mimicking the real organ in terms of shape, size, and texture.”

Principal Investigator Michael McAlpine, Ph.D., a 2017 recipient of the Presidential Early Career Award for Scientists and Engineers (PECASE) and the Benjamin Mayhugh Associate Professor of Mechanical Engineering at the University of Minnesota, further explained the unique nature of the work. “3D printed organs are nothing new; however, while anatomically correct, they are typically made of hard plastic. You can’t cut into or suture hard plastic. Our group built a unique 3D printer that uses customized silicone-based polymer ‘inks,’ which were developed by carefully studying the mechanical properties of actual prostate tissue. The inks were used to print the prostate model, which resulted in an anatomically accurate organ model, with the same elasticity and softness as the actual organ.”

This means it has the same tactile sensation, pliability and texture as a real prostate, which could be a game-changer for organ models. While the previous hard plastic models were useful for pre-surgical planning, McAlpine’s models can be used to actually practice the surgery, including probing, cutting, and then stitching-up the model of an actual patient’s prostate. This is especially important because prostate surgery comes with risks, such as urinary problems and erectile dysfunction. One goal for surgery is to be as precise as possible, to lower the chance of affecting healthy tissue.

Going a step further, the group also incorporated 3D printed sensorsinto the model prostate. The sensors provide feedback to the practicing surgeons as they probe and manipulate the model. When the prostate model is touched, the sensors instantly send a visual readout of the amount of pressure applied—essentially telling the surgeons how hard they are pressing on the model and whether the amount of pressure applied is appropriate or could damage healthy tissue.

Said McAlpine, “You can think about it like the children’s game of Operation when the guy’s nose lights up if you fail to remove the shin bone without bumping your forceps into his leg. Our graphic readout of the amount of pressure being applied to the prostate model parallels the Operation patient’s nose lighting up to indicate that you’ve got to try again—a little more gently next time.” “This quantitative, real-time feedback could change how surgeons think about the personalized medicine and preoperative practice,” said Dr. Kaiyan Qiu, Ph.D., the lead author of the work and a postdoctoral scientist at the University of Minnesota.

McAlpine stressed that the close collaboration between the engineers in his group and their medical colleagues was key to successfully executing this work. Indeed, the medical samples and surgeons’ expertise enabled the engineers to create the exact specifications needed to design and build the special silicone inks that mimic the physical properties of the prostate gland.

In the future, these abilities could be used to accurately print more complicated organ models, such as from cancer patients, using multiple inks to mimic different tissue properties. Even further, McAlpine says, “I think of this as the 'Human X' project. If we could replicate the function of these tissues and organs, we might someday even be able to create ‘bionic organs’ for transplants.”