Why Experts Are Worried About a New Virus in China

In Brief by Yanzhong Huang 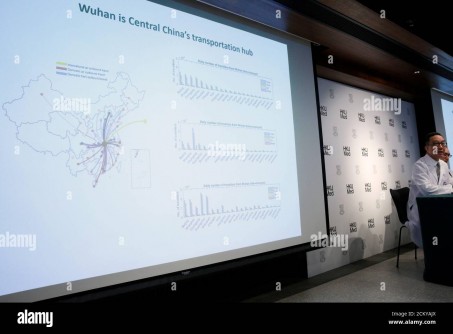 Gabriel Leung, Chair Professor of Public Health Medicine at the Faculty of Medicine at the University of Hong Kong (HKUMed), speaks about the extent of the Wuhan coronavirus outbreak in China during an news conference, in Hong Kong, China, January 21, 2020.

Newswise — Reports of a new strain of coronavirus causing pneumonia-like symptoms in the central Chinese city of Wuhan have sparked concerns of a wider outbreak throughout China and possibly in other countries. The World Health Organization (WHO) confirmed this week that a traveler from Wuhan was identified with the novel coronavirus in Thailand, and suspected cases have been reported in Hong Kong and South Korea. The outbreak is far from over and there is still much left to be understood about the new virus.

Why is this virus causing alarm?

The new virus belongs to the same family as severe acute respiratory syndrome (SARS), which afflicted China and thirty-six other countries in 2002–03, killing more than 770 people worldwide. The impact was severe enough to hurt the economies of China and countries in Southeast Asia. Like SARS coronavirus, this virus is expected to have high mutation rates, which means it can rapidly develop resistance to new drugs and vaccines. It was reported that the new virus bears 80 percent similarity to SARS.

Yet the virus does not appear to be as dangerous as SARS. The latter is highly contagious and life-threatening. The new virus appears to be less virulent—only one fatal case has been reported in Wuhan, among forty-one people in China who were confirmed to have been infected with the virus as of January 11. There is no clear evidence that the virus is easily passed from person to person, but local health authorities haven’t ruled out that possibility. All cases confirmed in China so far are linked to an animal market in Wuhan. The patients have shown pneumonia-like symptoms, including fever, and some have had difficulty breathing.

What challenges are posed by Lunar New Year celebrations?

The outbreak has occurred just weeks before the start of Lunar New Year on January 25. From mid-January to mid-February, hundreds of millions of Chinese people will travel throughout the country, which could facilitate the spread of infectious diseases.

Even though the risk that the new virus will spread is thought to be low, given the perceived lack of person-to-person transmission, China is suffering from various infectious disease outbreaks that could be exacerbated by the celebrations. The devastating African swine fever crisis could worsen, particularly as traveling people can spread the virus and as Chinese pork suppliers try to increase their stocks ahead of the holiday. In addition, over the past two months, the country has reported multiple cases of a deadly pneumonic plague and more than three hundred cases of brucellosis, an animal-borne disease that causes flu-like symptoms.

How is the Chinese government responding? What is its record on dealing with previous health scares?

The government’s initial handling of the SARS outbreak was characterized by cover-up and inaction, but this time the government responded relatively quickly. Soon after the outbreak became known in December, the Chinese Center for Disease Control and Prevention launched an investigation. The government implemented early diagnosis and quarantine measures and closed the wet market on January 1. It also conducted epidemiological investigations, including following close contacts of the people who were infected. On January 9, Chinese scientists were able to sequence the virus and developed a test to identify it.

However, global health experts were concerned that the government was not very forthcoming. They pointed out that for two weeks after the onset of the outbreak, the government provided little information, possibly contributing to a rising number of cases in Hong Kong. Amid increasing pressure from the international scientific community, on January 12 China shared the virus’s genetic sequence, which will be critical for other countries to develop kits to diagnose the virus more quickly.

How are people within Wuhan and throughout China reacting?

There has been little discussion of the virus on Chinese social media, as the government seeks to monopolize the release of disease-related information. Local police have threatened to jail those who spread “false information.” As a result, people in China are not adequately informed, and international scientists are not certain how many people outside of Wuhan may have been infected.

The outbreak is not over, despite the government’s announcement that no new cases have been identified since January 3. The woman who traveled from Wuhan to Thailand on January 8 was confirmed to be the first case of the coronavirus abroad, even though she did not visit the market linked to the other cases. The WHO has stated that it is essential that China continue investigating and that other countries prepare.

Yanzhong Huang, "Why Experts Are Worried About a New Virus in China", In Brief, Council on Foreign Relations, January 15, 2020