Dogs May Be Sloppy Drinkers, but They Get the Job Done 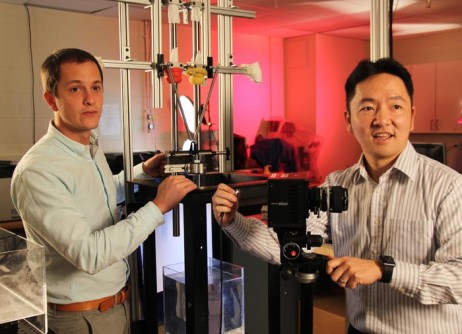 Graduate student Sean Gart (left) and Sunghwan “Sunny” Jung, an associate professor of biomedical engineering and mechanics at Virginia Tech, make adjustments in front of a machine they used to simulate the mechanics of how dogs drink water.

Newswise — Stories about lap dogs are everywhere, but researchers at the Virginia Tech College of Engineering can tell the story of dog lapping.

Using photography and laboratory simulations, researchers studied how dogs raise fluids into their mouths to drink. They discovered that sloppy-looking actions at the dog bowl are in fact high-speed, precisely timed movements that optimize a dogs’ ability to acquire fluids.

Their discovery appears today (3 p.m. Monday, Dec. 14) in the Proceedings of the National Academy of Sciences.

Researchers also compared what they learned about how dogs drink with what they knew from previous studies of cats. The scientists discovered that even though feline and canine mouths structurally are similar, their approaches to drinking are as different as — cats and dogs.

“We know cats and dogs are quite different in terms of behavior and character,” said Sunghwan “Sunny” Jung, an associate professor of biomedical engineering and mechanics. “But before we did fundamental studies of how these animals drink fluids, our guess was dogs and cats drink about the same way. Instead we found out that dogs drink quite differently than cats.”

Dogs and cats are biting animals and neither have full cheeks. But without cheeks, they can’t create suction to drink — as people, horses, and elephants do. Instead they use their tongues to quickly raise water upward through a process involving inertia.

Both animals move their tongues too quickly to completely observe by the naked eye. But dogs accelerate their tongues at a much faster rate than cats, plunging them into the water and curling them downward toward their lower jaws, not their noses.

They quickly retract their tongues and a column of water forms and rises into their mouths, but they also curl the underside of their tongues to bring a tiny ladle of water upward.

Dogs precisely bite down to capture the water. In an instant they reopen their mouths and immerse their tongues back into the water.

Cats, on the other hand, lightly touch the surface of the water with their tongues, usually never fully immersing them, according to previous imaging by Jung and other researchers. When their tongues rise into their mouths, liquid adheres to the upper side, forming an elegant water column.

When dogs accelerate their tongues upwards, the latest research reveals a water column rising, but some water remains in the ladle of the tongue and is tossed to either side of the dog’s mouth or it falls downwards.

Although dogs do not use their tongues to actively scoop water into their mouths, it is possible that the scooped liquid has some positive effect on the water column dynamics below the tongue, the researchers said.

In all, 19 dogs of various sizes and breeds were volunteered for filming by their owners. Thirteen of the dogs were filmed outdoors at their owners’ residences in the Blacksburg, Virginia, area. The remaining six were filmed at the Virginia Tech campus.

“This was a basic science study to answer a question very little was known about — what are the fundamental mechanics of how dogs drink?” said Sean Gart, a graduate student in biomedical engineering and mechanics who filmed the dogs. “Cats tend be viewed as neater, dogs are messier, but dogs really have to accelerate their tongues to exploit the fluid dynamics of the water column.”

The researchers measured tongue motion, recorded water volumes, and generally measured lapping in the dogs. They used the results to generate a physical model in the laboratory of the tongue’s interaction with the air-fluid interface, according to Jake Socha, an associate professor of biomedical engineering and mechanics at Virginia Tech.

Pavlos Vlachos, a professor of mechanical engineering at Purdue University, also participated in the study.

The research, supported by the National Science Foundation, is an accomplishment of the Bio-Inspired Fluid Lab of the Virginia Tech College of Engineering. The lab seeks to take cues from living systems to make practical applications that exploit the natural movement of fluids.