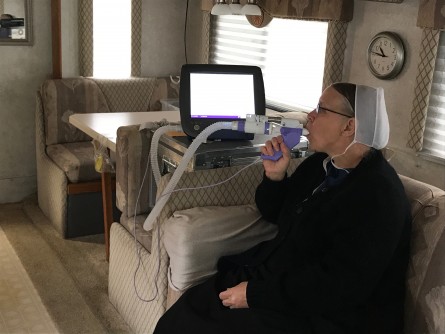 An Amish woman, who is a liaison between the Amish community and University of Maryland School of Medicine researchers, demonstrates a lung function device used during a study of secondhand smoke. Virtually no Amish women smoke.

The authors of the study, published in the journal PLoS ONE, say previous research on the effects of secondhand smoke, and smoking in general, have been difficult to interpret due to variables in the socioeconomic status and educational level of participants. To reduce these variables, the researchers studied members of the old order Amish (OOA), a community in Lancaster County, Pa. UM SOM research teams have conducted research in this community since 1995 through the UM SOM’s Amish Research Program.

“The way the Amish live makes them uniquely suited for this kind of study,” says lead investigator Robert M. Reed, MD, UM SOM associate professor of medicine and a pulmonary and critical care specialist at the University of Maryland Medical Center. “They live a lifestyle now that’s very similar to the lifestyle their ancestors lived many generations ago. They have a lot of physical activity, don’t drive, and the different Amish families live more similar lifestyles than do non-Amish populations.”

Also unique, cigars and pipes represent the predominant forms of tobacco smoked by the Amish. Reed says these smoking products produce more noxious secondhand smoke than cigarettes. Smoking in the group as a whole is fairly modest – 34 percent of men in the study said they had ever smoked. Just two women in the group reported ever smoking.

The researchers employed a novel method to track exposure to secondhand smoke. “We first asked people their own personal smoking habits, and then, because we know exactly how all the Amish are related to each other, we were able to look at the family tree and extrapolate who had been exposed,” explains Reed. “We knew if Mr. X says he smoked, we can extrapolate from that that his family was exposed.”

According to Reed, this approach has never been taken before in studies of smoking and it avoids a problem that can affect this type of research, called recall bias. “Sometimes people with poor health are more inclined to think harder about past exposures, which lead to misleading results. Our study avoids that possibility,” Reed says.

The researchers examined cross-sectional data on 3,568 Amish who participated in three community surveys of cardiovascular health between 2001 and 2015. Data included tobacco use and secondhand smoke exposure from family members included in the study. Additionally, the researchers took blood samples, measured lung function and assessed vascular health.

“The study confirms that even a small amount of secondhand smoke is harmful; it confirms prior findings and extends them by adding to the degree of certainty we have in the harmful associations we are seeing,” says Reed. He adds that the findings suggest the possibility of a significant role for mechanisms less clearly established in secondhand smoking, but recognized in association with active smoking, such as HDL and BMI.

“The real strength of this study is that this is a big population with very low exposure, yet we see very striking results for direct exposure,” says the study’s senior author, Braxton D. Mitchell, PhD, MPH, professor of medicine, epidemiology and public health at the University of Maryland School of Medicine and vice chair for research in the Division of Endocrinology, Diabetes & Nutrition in the Department of Medicine. “I would not have expected to see such dramatic effects with these low exposures.”

E. Albert Reece, M.D., Ph.D., M.B.A., vice president of medical affairs at the University of Maryland and dean of the School of Medicine, says, “This study suggests new avenues of research to understand more about the underlying mechanisms behind secondhand smoke. The fact that small amounts of exposure caused significant impact among Amish non-smokers, a population in which smoking is already at low levels, should be of concern to populations where smoking is much more prevalent.”

Tobacco smoking is the leading preventable cause of death in the United States, responsible for an estimated 480,320 deaths annually, including 41,280 deaths attributable to lung cancer and coronary heart disease related to secondhand smoke exposure, according to a 2014 report from the Office of the Surgeon General.

Commemorating its 210th Anniversary, the University of Maryland School of Medicine was chartered in 1807 and is the first public medical school in the United States. It continues today as an innovative leader in accelerating innovation and discovery in medicine. The School of Medicine is the founding school of the University of Maryland and is an integral part of the 11-campus University System of Maryland. Located on the University of Maryland’s Baltimore campus, the School of Medicine works closely with the University of Maryland Medical Center and Medical System to provide a research-intensive, academic and clinically based education. With 43 academic departments, centers and institutes and a faculty of more than 3,000 physicians and research scientists plus more than $400 million in extramural funding, the School is regarded as one of the leading biomedical research institutions in the U.S. with top-tier faculty and programs in cancer, brain science, surgery and transplantation, trauma and emergency medicine, vaccine development and human genomics, among other centers of excellence. The School is not only concerned with the health of the citizens of Maryland and the nation, but also has a global presence, with research and treatment facilities in more than 35 countries around the world. http://medschool.umaryland.edu.

The University of Maryland Medical Center (UMMC) is comprised of two hospitals in Baltimore: an 800-bed teaching hospital – the flagship institution of the 12-hospital University of Maryland Medical System (UMMS) – and a 200-bed community teaching hospital, UMMC Midtown Campus. UMMC is a national and regional referral center for trauma, cancer care, neurocare, cardiac care, diabetes and endocrinology, women’s and children’s health, and has one of the largest solid organ transplant programs in the country. All physicians on staff at the flagship hospital are faculty physicians of the University of Maryland School of Medicine. At UMMC Midtown Campus, faculty physicians work alongside community physicians to provide patients with the highest quality care. UMMC Midtown Campus was founded in 1881 and is located one mile away from the University Campus hospital. For more information, visit www.umm.edu.