3-Oct-2016 4:05 PM EDT, by University of Alabama at Birmingham
favorite_border 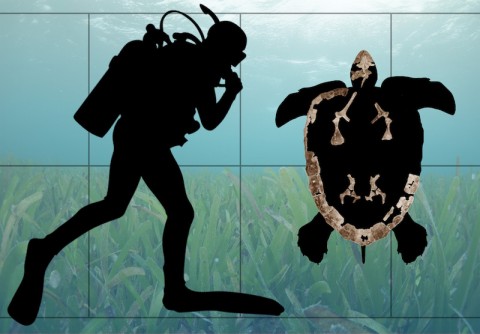 Silhouette of Ctenochelys acris overlaid with some of the fossils used to reconstruct the species.

Silhouette of Ctenochelys acris overlaid with some of the fossils used to reconstruct the species.

Researchers from the College of Arts and Sciences’ Department of Biology worked with two relatively complete turtle skeletons, along with several smaller pieces, that are housed at Birmingham’s McWane Science Center, to unearth the evolutionary clues tying the ancient turtles to modern sea turtles, and confirm the existence of that ancient species, previously known only from a few isolated fragments.

The McWane fossils help solve a long-standing debate as to whether this animal was a unique species. They also provide insights into the evolutionary history of living species of sea turtles, including the Kemp’s Ridley, Loggerhead and the endangered Green sea turtle.

According to research published in the Journal of Systematic Palaeontology, the fossils belong to Ctenochelys (tee-no-key-lees) acris, a marine-adapted turtle that lived in the shallow, subtropical sea that once covered most of Alabama. By dating the rock formation from which these fossils were recovered, C. acris is presumed to have lived more than 80 million years ago, during the Late Cretaceous, a period of time when sea turtle diversity was at an all-time high.

“Climatic warming during the mid-Cretaceous resulted in elevated sea levels and temperatures that, in turn, provided an abundance of new niches for marine turtles to invade,” said Drew Gentry, a UAB biology doctoral student and the lead researcher on the project. “Represented today by only seven living species, sea turtles were once one of the most diverse lineages of marine reptiles. Before the cataclysm that claimed the dinosaurs, there may have been dozens of specialized species of sea turtle living in different oceanic habitats around the world.”

Before this research, so little fossil evidence for C. acris had been documented that most paleontologists doubted the species was real. Not only do the newly discovered fossils prove C. acris existed, they may also be a critical piece in a much larger puzzle of sea turtle evolution.

“There is strong evidence which indicates freshwater turtles may have evolved to occupy marine environments at several points in the past,” Gentry said. “But most of those lineages went extinct, making the exact origins of living or ‘true’ sea turtles somewhat of a mystery.”

Evidence gathered from the fossils of C. acris suggests the earliest ancestors of modern sea turtles may have come from the Deep South. By comparing the skeleton of C. acris with those of both extinct and living species of turtles, Gentry discovered that C. acris possessed traits of both sea turtles and their closest living turtle relatives, snapping turtles.

“This animal was a bottom-dwelling sea turtle that fed primarily on mollusks and small invertebrates,” he said. “Unlike the ‘rudder-like’ hind-limbs of today’s sea turtles, C. acris had large, powerful hind-limbs to help push it through the water, a lot like a modern-day snapping turtle.

“Data from C. acris tell us not only that marine turtles are capable of occupying specialized oceanic niches, but also that many of the sea turtles we know today may have gotten their evolutionary start as something similar to an oversized snapping turtle in what eventually became the southeastern United States.”

Studying the diversity and evolutionary history of sea turtles during previous periods of climate change can provide meaningful insights into what effects climate and environmental changes might have on modern marine turtle populations.

“An important, yet often overlooked, aspect of sea turtle research is their evolutionary history,” Gentry said. “By analyzing the remains of fossil species, we can begin to understand the origins of these animals and how they’ve adapted to different environments over time.”

The paleontological and archaeological collection at McWane is one of the largest in the southeastern U.S. and houses a number of significant finds from across Alabama, including the recently announced Eotrachodon, a type of duck-billed dinosaur.

“We are always making discoveries from the specimens housed at McWane that give us new respect for the individuals who contributed to this collection,” Gentry said. 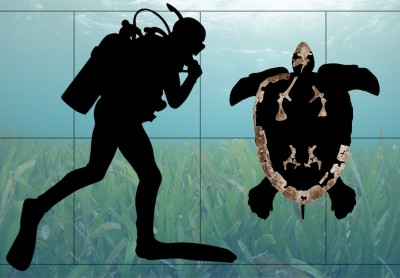 Caption: Silhouette of Ctenochelys acris overlaid with some of the fossils used to reconstruct the species.

Caption: Silhouette of Ctenochelys acris overlaid with some of the fossils used to reconstruct the species.