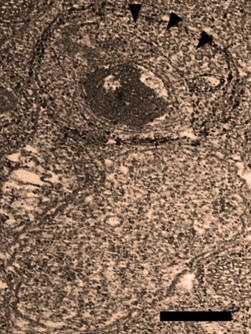 Electron microphotograph shows two Wolbachia cells that have infected a Nasonia wasp. The top one is infected with the WO phage, pointed out by the black arrowheads. The bottom one is uninfected. The large dark patch is bacteria DNA that has been degraded by the phage. The image also shows the multiple wasp membranes wrapped around the Wolbachia that the phage must penetrate both to enter and escape from the bacteria.

Newswise — A tiny virus that may sting like a black widow spider.

That is one of the surprise discoveries made by a pair of Vanderbilt biologists when they sequenced the genome of a virus that attacks Wolbachia, a bacterial parasite that has successfully infected not only black widow spiders but more than half of all arthropod species, which include insects, spiders and crustaceans.

“Discovering DNA related to the black widow spider toxin gene came as a total surprise because it is the first time that a phage – a virus that infects bacteria – has been found carrying animal-like DNA,” said Associate Professor of Biological Sciences Seth Bordenstein. He and Senior Research Specialist Sarah Bordenstein reported the results of their study in a paper titled “Eukaryotic association module in phage WO genomes from Wolbachia” published Oct. 11 in the journal Nature Communications.

Normally phages, like the WO phage that they studied, carry specialized genes that break open and defeat the defenses of the prokaryotic bacterial cells they target. But in this case, “the portion of DNA related to the black widow spider toxin gene is intact and widespread in the phage,” said Bordenstein. “There is also evidence that the phage makes insecticidal toxins, but we are not certain yet how these are utilized and administered.”

The scientists also found that WO shares a number of other segments of DNA with animal genomes. These include a sequence that the eukaryotic cells found in animals use to sense pathogens, which is also involved in triggering cell death. In addition, there were several genes that the cells use to evade immune responses. “These sequences are more typical of eukaryotic viruses, not phages,” Bordenstein commented.

He speculated that the reason WO is exceptional in this regard is due to the life history of its target. Once Wolbachia infect a host arthropod, it wraps itself in a layer of the arthropod’s membrane. As a result, the phage has to force its way through these eukaryotic membranes in order to enter or escape.

“We suspect it makes pores in the membranes of the arthropod cells that surround Wolbachia, thereby allowing the phage to overcome both the bacterial and arthropod membranes that surround it. That may be how it uses some of these proteins” he said.

Their sequencing and bioinformatic efforts also allowed the Bordensteins to identify the genetic sequences that phage WO uses to insert its genome into theWolbachia chromosome. This information may provide a basic toolkit that can be used to genetically engineer the bacterium.

This capability could be used to enhance ongoing efforts that use Wolbachia to fight dengue fever and Zika virus. It turns out that Wolbachia prevents these viruses from reproducing in Aedes aegypti mosquitoes that spread them. Infecting and spreading mosquitoes with Wolbachia has been successfully field tested in Australia, Brazil, Columbia, Indonesia and Vietnam.

Use of the bacterial parasite has two potential advantages compared to other approaches: It doesn’t rely on toxic chemicals and, once it is introduced, the bacteria spread rapidly through the mosquito population and sustain themselves.

“The ability to genetically engineer Wolbachia could lead to inserting genes that cause the bacteria to produce traits that increase the effectiveness of usingWolbachia against dengue and Zika viruses. It could also be used to combat other agricultural pests,” the biologist said.

Bordenstein began studying the WO 15 years ago because he was curious about how such a virus survives and flourishes in a symbiotic bacteria like Wolbachiathat has a very small genome. “At the time, some of my colleagues asked why I was studying such an obscure subject,” he recalled.

Several years ago, Bordenstein and his colleagues felt that they had answered the major scientific questions involving the phage, but they decided to sequence its genome for completeness sake. They had no idea that their analysis would produce information that provides fresh insights in virology and could possibly aid efforts to reduce or eradicate a number of diseases which have afflicted humans for millennia.