Accelerators May Get a Boost from Oxygen 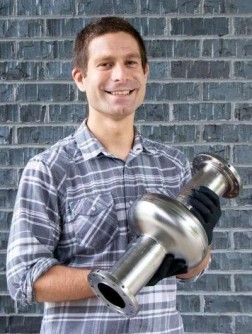 Newswise — Whipping up world-class particle accelerator structures has long been a process akin to following a favorite recipe. Many of the best-performing samples are prepared using processes developed through trial and error over decades of experience. But recently, accelerator scientists have been boosting this empirical approach to science with more theoretical input. Now, their efforts are beginning to pay off.

Accelerator scientists at the U.S. Department of Energy's Thomas Jefferson National Accelerator Facility have developed a model for a cheaper and easier preparation method for getting better performance from particle accelerators. Further, preliminary tests of the new model show that it may soon provide scientists the ability to predict the best material preparation method for specific performance goals. The results from this study were recently published in Applied Physics Letters.

It was once thought that niobium accelerator cavities worked best if they were made of the purest niobium metal and had the cleanest, contaminant-free surface. However, several recent studies have indicated that adding specific elements to a cavity’s surface could help increase its efficiency.

Specifically, initial research at DOE’s Fermi National Accelerator Laboratory discovered that adding nitrogen to the surface of niobium accelerator components makes them more efficient. The strong empirical results from subsequent collaborative tests convinced managers for the upgrade of the Linac Coherent Light Source to adopt this process, which they referred to as “nitrogen doping.” The LCLS is located at DOE’s SLAC National Accelerator Lab in Menlo Park, Ca.

Nitrogen doping cavities, however, can be a complicated process. The final preparation steps of a typical recipe include firing them in a pristinely clean furnace at around 800 (about 1,500for hours with addition of a bit of nitrogen gas during the last few minutes, rinsing them off with a high-pressure stream of ultra-pure water, and then subjecting the cavities to a carefully controlled acid treatment called electropolishing that essentially strips thin layers of very lossy material from the surface. Following another rinse, the cavities are ready to be tested to determine their efficiency.

This long and involved process has delivered excellent results in tests required for that project. But, the science of how the preparation improved performance – what physical changes it induces in a cavity’s surface and how that produced the desired effect -- remained ambiguous. Also unknown was how tweaking certain parts of the process would improve or limit accelerator cavity performance.

In 2019, Jefferson Lab Staff Scientist Ari Palczewski set out to change that. He received a DOE Early Career Award from the Office of Nuclear Physics to develop a theoretical model of how different processing steps equate to expected performance in accelerator cavities that have been doped with nitrogen.

Palczewski took a multidisciplinary approach to the research. He brought on board Eric Lechner as a postdoctoral fellow in Jefferson Lab’s SRF Institute. Lechner applies theoretical expertise to the project. He started out by deconstructing the mechanics of how nitrogen-doping recipes change the surface of the niobium.

“Essentially what is happening is that you allow some impurities to go into the surface of the niobium, which makes up your SRF accelerator cavities. We’re talking just a few micrometers or so. This enhances the properties of the superconductor,” explained Lechner.

He analyzed prepared samples with Jonathan Angle, a graduate student in the materials science and engineering program at Virginia Tech. Angle used a technique called secondary ion mass spectrometry to scan the surface and depths of the material to characterize how nitrogen was distributed in the niobium by different preparation techniques.

From Nitrogen to Oxygen

While this research was proceeding well, the team soon had reasons to switch gears.

Researchers at the High Energy Accelerator Research Organization (KEK) in Japan began reporting efficiencies rivaling that of nitrogen-doped accelerator cavities from cavities that had received a far less onerous processing method. Essentially, the KEK researchers had baked cavities in a furnace at far lower temperatures – at just 300-400  – and then simply rinsed off the cavities and tested them. These results intrigued the accelerator scientists at Jefferson Lab.

Further, the early career project that had been focused on nitrogen doping was coming to a close with the departure of Palczewski, who had gone on to pursue different challenges in industry.

Charlie Reece, a senior accelerator physicist in the SRF Institute, then made a proposal for the line of research to focus on the promising alternative preparation process.

Lechner and Angle set to work preparing cavities using the simpler process. They then analyzed the cavities’ surfaces.

“Jonathan and I investigated it with the secondary ion mass spectrometry technique. And this is where we had found out that the main contaminant in this case was oxygen rather than nitrogen, so it played a similar role in enhancing the performance,” Lechner said.

He said the oxygen comes from the surface of the niobium itself. That’s because oxides, which primarily contain the atoms of oxygen, always form on the metal’s surface with exposure to the air.

“When you heat it up, the oxide starts to dissolve, and the oxygen that is released during this process ends up getting dissolved into the surface of niobium in a diffusion process,” Lechner explained.

The result is a new, thin surface layer composed of a niobium-oxygen alloy. And because the oxygen comes from oxides that are naturally present on every surface of the cavity, the oxygen diffuses uniformly into every nook and cranny.

“Simply put, this process is simpler, cheaper, and works on any geometry or design of accelerator cavity,” Reece said.

“A lot of the effort behind this work was trying to understand the mechanism behind the introduction of oxygen into the surface. There are not that many models out there that predict what is going on when you bake a cavity in this temperature range,” Lechner said.

But one model that stood out came from another of Jefferson Lab’s own researchers: Gigi Ciovati. While working on his Ph.D. thesis in 2006, Ciovati had developed a theoretical model on niobium oxide dissolution and oxygen diffusion to explain the migration of oxygen at temperatures around 100-200.

“Gigi had developed quite a nice model that explained this effect,” Lechner commented. “This modeling allows you to develop an oxygen profile into the surface that is customizable, so you can try to develop a heating recipe to enhance the quality factor [how well the cavity performs] optimally. And also, you might be able to engineer an oxygen profile that enhances the maximum accelerating gradient in the cavity, which tells you how much energy you can store in there.”

This phase of the work aimed to take the analytical model that Ciovati had developed and use it to build a new numerical model that would allow accelerator builders to fine-tune their recipes to achieve more efficient accelerator cavities.

“Now, we’re trying to develop a numerical model that will help us tailor a profile near the surface such that it optimizes the quality factor and accelerating field,” Lechner said.

If successful, the new model will allow accelerator builders to confidently dial up the optimum recipe for the efficiency enhancement they need. This would, for the first time, allow for customizability of the accelerator structure preparation recipe without unnecessary time lost to blind trial-and-error.

Lechner said that the team is already getting promising results from the new model, but suggests that improvements to the modeling can still be made.

“This is still a work in progress. We are looking to test this model now,” he added.

Initial results were recently published in Applied Physics Letters and recognized as notable by selection as an Editors Pick contribution.