Nuclear scientists devise an indirect method of measuring the speed of sound in matter created in heavy-ion collisions. 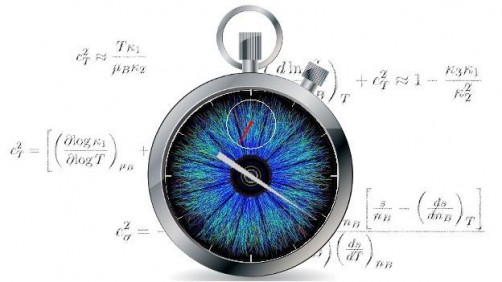 Measuring the speed of sound in matter created in heavy-ion collisions may be possible through analysis of fluctuations in the number of detected particles.

Nuclear physicists proposed a method to measure the speed of sound characterizing matter created in nuclear collisions. Heavy nuclei consist of hundreds of protons and neutrons (belonging to a group of particles called hadrons), which themselves are composed of quarks and gluons. Quarks and gluons, bound inside protons and neutrons by the strong force, can never be observed individually. However, in heavy-ion collisions, the energy density of matter reaches very high levels, and the nucleons become a “soup” of quarks and gluons: a quark-gluon plasma. Although particles measured in detectors are again bound in hadrons, experimental analyses can reveal properties of the quark-gluon plasma.

Properties of nuclear matter in extreme conditions, such as those reached in high-energy heavy-ion collisions, reveal the way in which quarks and gluons interact with each other. They also inform scientists’ understanding of the matter present in the Early Universe or the evolution of neutron stars and neutron star mergers. The suggested method of measurement uses fluctuations in numbers of detected particles. These fluctuations are known as “cumulants,” and measurements of cumulants may reveal the behavior of the speed of sound in heavy-ion collisions. This in turn would allow scientists to learn about the thermodynamics of dense nuclear matter.

Sound is a wave which propagates through a medium by creating regions of alternately compressed and rarefied matter. Pressure is larger in the compressed regions and smaller in the rarefied regions, and the speed of sound is larger in media for which the change in pressure corresponding to a change in density is large. This can be understood intuitively: when the pressure rises fast in a local compression region, the reaction of the medium to this compression will be fast too, and consequently the pattern of compressions and rarefactions – the sound – will propagate fast as well. Simultaneously, when the change of the pressure in response to a local density change is large, it is unlikely to create regions with large density fluctuations (very dense compression regions or very dilute rarefaction regions). Together, this means that the speed of sound is inversely proportional to the magnitude of typical fluctuations in density of a given medium, and therefore measuring fluctuations in the density of particles may reveal the behavior of the speed of sound. Heavy-ion collision experiments can measure fluctuations in the number of detected particles, and through that learn about the speed of sound in dense nuclear matter.

This work was supported by the U.S. Department of Energy Office of Science, Office of Nuclear Physics.