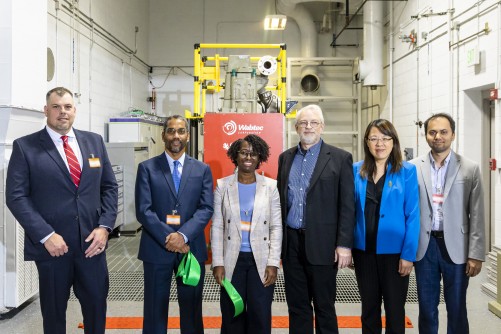 ORNL and Argonne are teaming with Wabtec Corp. to develop a locomotive engine that can run on low-carbon fuels like hydrogen. Members of the team were joined by representatives from DOE and the Department of Transportation to kick off the project at ORNL. Pictured, from left, are Jim Gamble, Wabtec; Siddiq Khan, DOE’s Vehicle Technologies Office; Melissa Shurland, DOT; Dean Edwards, ORNL; Xin Sun, ORNL; and Muhsin Ameen, Argonne. 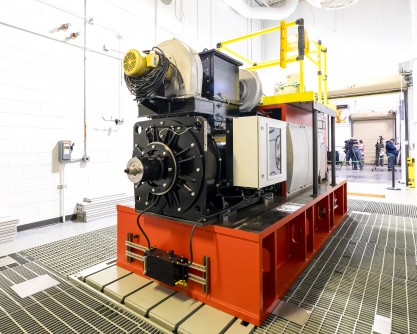 Researchers from ORNL and Argonne National Laboratory will work with Wabtec, a leading manufacturer of freight locomotives, to develop the hardware and control strategies for a single cylinder, dual-fuel engine to demonstrate the viability of using alternative fuels for locomotives. The team’s goal is to reduce carbon emissions from the roughly 25,000 locomotives already in use in North America.

Newswise — As the United States shifts away from fossil-fuel-burning cars and trucks, scientists at the Department of Energy’s Oak Ridge and Argonne national laboratories are exploring options for another form of transportation: trains. The research focuses on zero-carbon hydrogen and other low-carbon fuels as viable alternatives to diesel for the rail industry.

Researchers from the multidisciplinary team kicked off the project and celebrated the installation of rail technology company Wabtec’s single-cylinder dual-fuel locomotive engine in the National Transportation Research Center, a DOE-designated user facility located at ORNL, during a Nov. 9 event.

Both laboratories have entered into cooperative research and development agreements with Wabtec, a leading manufacturer of freight locomotives. The Argonne and Wabtec agreement also includes Convergent Science, Inc., a software developer. The project will run for four years.

Hydrogen as fuel has many advantages, but locomotive engines must be modified to ensure safe, efficient and clean operation. The team will develop hardware and control strategies for the engine, which will run on hydrogen and diesel fuel to demonstrate the viability of using alternative fuels.

“We are excited to be a part of this collaboration because it addresses the need to decarbonize the rail industry by advancing hydrogen engine technology for both current and future locomotives,” said Josh Pihl, an ORNL distinguished researcher and group leader for applied catalysis and emissions research. “It is also a perfect example of how a DOE-funded collaboration between industry and national laboratories can accelerate the development and commercialization of technologies to help reduce carbon emissions from transportation.”

Pihl said the project aligns with the goals of DOE’s Vehicle Technologies Office to use low-carbon fuels in hard-to-electrify transportation sectors. While electrifying vehicles is an effective strategy in reducing carbon emissions from some parts of the transportation sector, railways are considered more difficult because of the high cost of building a single coordinated electrified rail system across North America. Each year, the North American rail fleet emits approximately 87.6 billion pounds of carbon dioxide, a major driver of climate change.

Researchers are exploring the potential of hydrogen combustion engine technology in the rail industry, said Muhsin Ameen, Argonne senior research scientist. Hydrogen is an energy carrier that can be produced from clean energy sources such as solar and wind power. Scientists have studied hydrogen-powered vehicles for decades.

“To reduce carbon dioxide emissions to net zero by 2050, we must make dramatic improvements in energy efficiency and emissions in the overall transportation system, including railways,” said Ameen. “Hydrogen has been used in light-duty combustion engines. However, hydrogen is a newer area of research in railway applications.”

The research team is developing combustion technology to power the next generation of trains with up to 100% hydrogen and other low-carbon fuels. The team’s goal is to design train engines that will deliver the same power, range and cost-effectiveness as current diesel technology.

“This collaboration with Argonne and Oak Ridge national laboratories with DOE support will advance the development of hydrogen technology within Wabtec’s existing industry-leading platforms for medium-speed engines. Railroads will be able to greatly reduce carbon emissions while maintaining commonality within their current fleet of trains,” said James Gamble, vice president of engine and power solutions technology at Wabtec.

In the project’s first phase, the ORNL team will work on hardware changes for retrofitting locomotives. Its goal is to reduce CO2 emissions from the roughly 25,000 locomotives already in use in North America. Locomotives have a service life of more than 30 years, so replacing the entire fleet would take decades.

During the second phase of the project, ORNL and Wabtec will continue to alter the engine hardware to increase the amount of hydrogen that can be used. The team aims to completely replace diesel with hydrogen or low-carbon fuels in new locomotives.

At the same time, Argonne will leverage more than a decade of experience in modeling hydrogen injection and combustion to create a modeling framework to study combustion and emission control technologies used in hydrogen combustion engines. Experts in fuel injection, kinetics and combustion modeling, design optimization, high-performance computing and machine learning will take the project from start to finish.

Each diesel-powered locomotive that is converted to a zero- or low-carbon energy source is anticipated to save up to 5.6 million pounds of carbon dioxide per year.

The project is funded by the Vehicle Technologies Office under DOE’s Office of Energy Efficiency and Renewable Energy and by Wabtec. In-kind contributions are provided by Wabtec and Convergent Science, Inc. The U.S. Department of Transportation Federal Railroad Administration is also funding related research on safe use of hydrogen in locomotive engines.

Argonne National Laboratory seeks solutions to pressing national problems in science and technology. The nation’s first national laboratory, Argonne conducts leading-edge basic and applied scientific research in virtually every scientific discipline. Argonne researchers work closely with researchers from hundreds of companies, universities, and federal, state, and municipal agencies to help them solve their specific problems, advance America’s scientific leadership and prepare the nation for a better future. With employees from more than 60 nations, Argonne is managed by UChicago Argonne, LLC for the U.S. Department of Energy’s Office of Science.

Wabtec Corporation (NYSE: WAB) is focused on creating transportation solutions that move and improve the world. The company is a leading global provider of equipment, systems, digital solutions, and value-added services for the freight and transit rail industries, as well as the mining, marine, and industrial markets. Wabtec has been a leader in the rail industry for over 150 years and has a vision to achieve a zero-emission rail system in the U.S. and worldwide. Visit Wabtec’s website at www.wabteccorp.com.

UT-Battelle manages ORNL for the Department of Energy’s Office of Science, the single largest supporter of basic research in the physical sciences in the United States. The Office of Science is working to address some of the most pressing challenges of our time. For more information, please visit energy.gov/science. — Jennifer Burke and Beth Burmahl