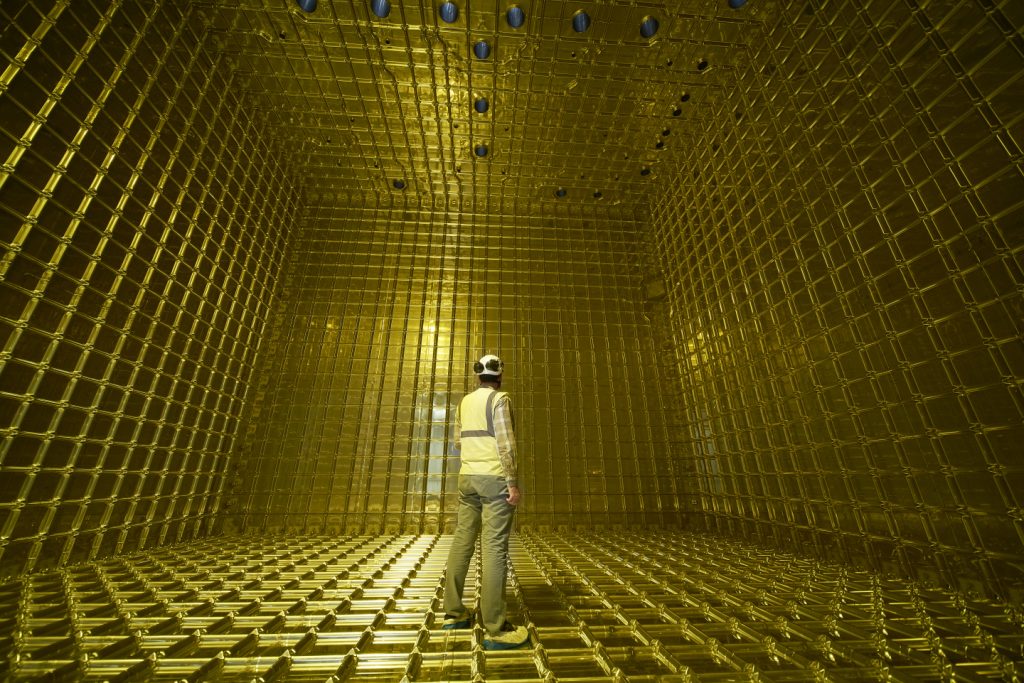 Argonaut is a robotic system being designed to monitor the interiors of liquid-argon particle detectors, which are kept at minus-193 degrees Celsius. The ProtoDUNE neutrino detector at CERN uses fixed internal cameras to look for issues like bubbles and sparks when filled with 800 tons of liquid argon. 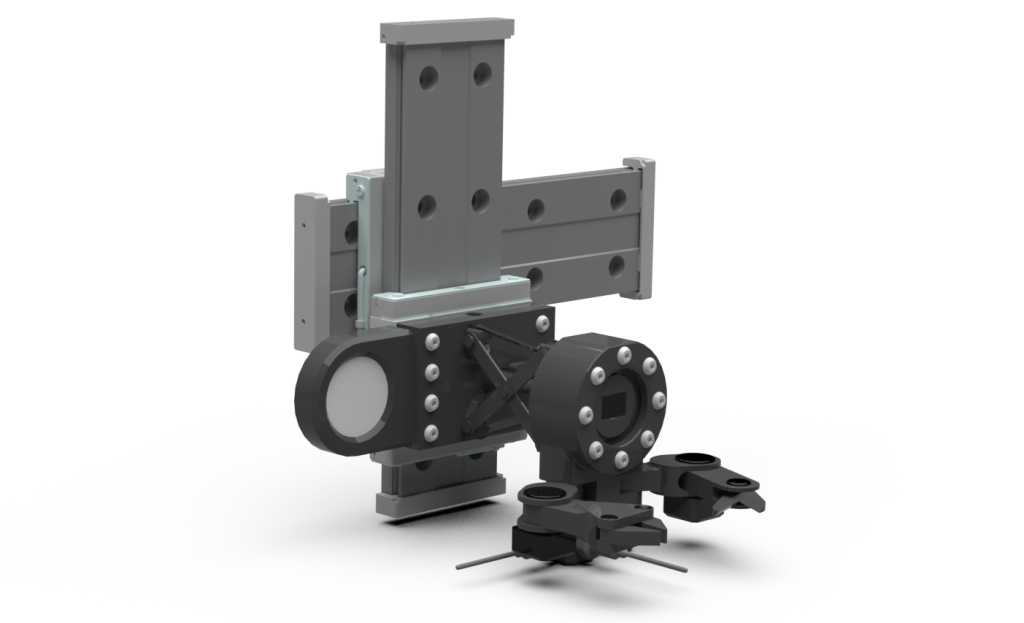 To keep power requirements low and avoid disturbances in the liquid argon, Argonaut will move slowly along tracks on the side of the detector. Its main function is a movable camera, but the engineers working on it hope to add other features like extendable arms for minor electronics repair.

Newswise — The Argonauts of Greek mythology braved sharp rocks, rough seas, magic and monsters to find the fabled Golden Fleece. A new robotics project at the Department of Energy’s Fermi National Accelerator Laboratory will share that same name and spirit of adventure.

Argonaut’s mission will be to monitor conditions within ultracold particle detectors by voyaging into a sea of liquid argon kept at minus-193 degrees Celsius — as cold as some of the moons of Saturn and Jupiter. The project, funded in March, aims to create one of the most cold-tolerant robots ever made, with potential applications not only in particle physics but also deep space exploration.

Argonaut is a robotic system being designed to monitor the interiors of liquid-argon particle detectors, which are kept at minus-193 degrees Celsius. The ProtoDUNE neutrino detector at CERN uses fixed internal cameras to look for issues like bubbles and sparks when filled with 800 tons of liquid argon.

Argon, an element commonly found in the air around us, has become a key ingredient in scientists’ quests to better understand our universe. In its liquid form, argon is used to study particles called neutrinos in several Fermilab experiments, including MicroBooNE, ICARUS, SBND and the next-generation international Deep Underground Neutrino Experiment. Liquid argon is also used in dark matter detectors like DEAP 3600, ARDM, MiniCLEAN and DarkSide-50.

Liquid argon has many perks. It’s dense, which increases the chance that notoriously aloof neutrinos will interact. It’s inert, so electrons knocked free by a neutrino interaction can be recorded to create a 3D picture of the particle’s trajectory. It’s transparent, so researchers can also collect light to “time stamp” the interaction. It’s also relatively cheap — a huge plus, since DUNE will use 70,000 tons of the stuff.

But liquid-argon detectors are not without their challenges. To produce quality data, the liquid argon must be kept extremely cold and extremely pure. That means the detectors must be isolated from the outside world to keep the argon from evaporating or becoming contaminated. With access restricted, diagnosing or addressing issues inside a detector can be difficult. Some liquid-argon detectors, such as the ProtoDUNE detectors at CERN, have cameras mounted inside to look for issues like bubbles or sparks.

“Seeing stuff with our own eyes sometimes is much easier than interpreting data from a sensor,” said Jen Raaf, a Fermilab physicist who works on liquid-argon detectors for several projects including MicroBooNE, LArIAT and DUNE.

The idea for Argonaut came when Fermilab engineer Bill Pellico wondered if it would be possible to make the interior cameras movable. A robotic camera may sound simple — but engineering it for a liquid-argon environment presents unique challenges.

All of the electronics have to be able to operate in an extremely cold, high-voltage environment. All the materials have to withstand the cooling from room to cryogenic temperatures without contracting too much or becoming brittle and falling apart. Any moving pieces must move smoothly without grease, which would contaminate the detector.

“You can’t have something that goes down and breaks and falls off and shorts out something or contaminates the liquid argon, or puts noise into the system,” Pellico said.

Pellico received funding for Argonaut through the Laboratory Directed Research and Development program, an initiative established to foster innovative scientific and engineering research at Department of Energy national laboratories. At this early stage of the project, the team — Pellico, mechanical engineers Noah Curfman and Mayling Wong-Squires, and neutrino scientist Flavio Cavanna — is focused on evaluating components and basic design aspects. The first goal is to demonstrate that it’s possible to communicate with, power and move a robot in a cryogenic environment.

“We want to prove that we can have, at a bare minimum, a camera that can move around and pan and tilt in liquid argon, without contaminating the liquid argon or causing any bubbles, with a reliability that shows that it can last for the life of the detector,” said Curfman.

The plan is to power Argonaut through a fiber-optic cable so as not to interfere with the detector electronics. The fist-sized robot will only get about 5 to 10 watts of power to move and communicate with the outside world.

The motor that will move Argonaut along a track on the side of the detector will be situated outside of the cold environment. The camera will be inside the cold liquid and move very slowly; but that’s not a bad thing — going too fast would create unwanted disturbances in the argon.

To keep power requirements low and avoid disturbances in the liquid argon, Argonaut will move slowly along tracks on the side of the detector. Its main function is a movable camera, but the engineers working on it hope to add other features like extendable arms for minor electronics repair.

Other future upgrades to Argonaut could include a temperature probe or voltage monitor, movable mirrors and lasers for calibrating the light detectors, or even extendable arms with tools for minor electronics repair.

Much of the technology Argonaut is advancing will be broadly applicable for other cryogenic environments — including space exploration. The project has already garnered some interest from universities and NASA engineers.

Deep space robots “are going to go to remote locations where they have very little power, and the lifetime has to be 20-plus years just like in our detectors, and they have to operate at cryogenic temperatures,” Pellico said. The Argonaut team can build on existing robotics know-how along with Fermilab’s expertise in cryogenic systems to push the boundaries of cold robotics.

Even the exteriors of active interstellar space probes such as Voyagers 1 and 2 don’t reach temperatures as low as liquid argon — they use thermoelectric heaters to keep their thrusters and science instruments warm enough to operate.

Caption: Argonaut is a robotic system being designed to monitor the interiors of liquid-argon particle detectors, which are kept at minus-193 degrees Celsius. The ProtoDUNE neutrino detector at CERN uses fixed internal cameras to look for issues like bubbles and sparks when filled with 800 tons of liquid argon.

Caption: To keep power requirements low and avoid disturbances in the liquid argon, Argonaut will move slowly along tracks on the side of the detector. Its main function is a movable camera, but the engineers working on it hope to add other features like extendable arms for minor electronics repair.